The purpose of the Tattoo Removal Program is to assist the Sheriff’s Office in the rehabilitation of inmates by removing tattoos or body art that may be deemed socially unacceptable and which could hinder their ability to reintegrate back into the community. The Sheriff’s Office mission through this program is to help eliminate barriers which could hamper the inmate’s successful re-integration into society.

The NBJ Inmate Services Program plans to offer these treatments to inmates, free of charge with appointments on a weekly basis. Criteria for participation in this program include participation in rehabilitation programs, no current discipline reports, and sentencing must be finalized with sufficient confinement time to complete the tattoo removal process. 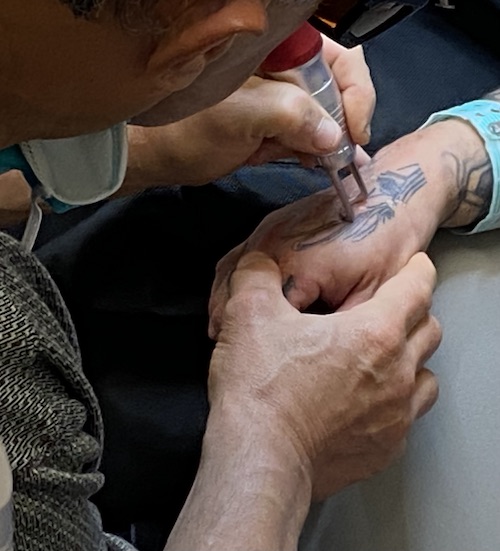 Are taxpayers paying for this? Get a job in government, a growth industry!

Yea, wouldn't want to do anything that might help them get a job when they get out.

The technical detail that is important is that blasting the skin with lasers destroys the natural pigment layer in the skin as it explodes the tattoo pigment. So in a dark skinned individual what was a black tattoo will now be a reverse image, a silhouette in scar tissue paler than the surrounding skin. Before the laser technique was developed it was common for the prison system to hire tattoo artists to do "cover-ups" by putting a new non-identifying tattoo on top of the previous. This was done to reward snitches, to conceal their identity as they were sent to a new prison after giving incriminating testimony against a gang.

It’s the tattoos fault they can’t get jobs and revert to crime?
Right, I have a bridge to sell you.

Sitting on the sideline reading so many naive comments... so here you go. The program is designed to laser-remove ONLY those visible tattoos which are socially-unacceptable and threatening:

a. to SBLET: I believe one of the missions of incarceration is rehabilitation, reformation and reintegration into society, which (contrary to your prejudice) many inmates truly want. What business would hire an ex-con with (for example) a swastika on his forehead?
b. to Luck: A little bit of knowledge is dangerous. First, your concern is not unknown by laser physicians. This is why test patches are performed prior to treating an entire tattoo. Next, you are assuming all inmates have dark skin... which would be wrong.
c. to NotReal: If eliminating the visible socially-unacceptable tattoos... not the "I Love Mom" and cartoon tattoos, but rather the gang symbols or Fu-- Y--... can decrease the rate of recidivism, then isn't that tax $ well spent? Compare that to the cost to taxpayers to imprison 1 person for 1 day! An employed ex-con is much less likely to be a repeat offender than one unemployed roaming the streets.

Rather than sit on the couch and gripe, get up and do something to make society better. I believe this program is going to be quite successful as have similar programs in other communities.
-John Baeke, MD

Thank you SIR! Greatly appreciated -John Baeke, MD.... "Just the facts ma'am" Dragnet? is actually “All we want are the facts, ma’am”, I've relearned something today.

And so spake Dr. Baeke! Well done and thank you for your efforts and time in this valuable program!