Aftermath of the 1/9 Debris Flow in Montecito (Photo: SBCFD)

A new report by the Los Angeles Times states Santa Barbara County officials knew mudslides were a risk in Montecito and records show they did little to prevent them.

The only protection Montecito residents and their properties have is a low dam built in 1964 by the Army Corps of Engineers at the mouth of the creek’s canyon. It forms a basin to catch falling debris. Since it's construction, the basin has filled with vegetation and sediment along with the 16 other basins built along the hillside to Carpinteria.

Last year the Thomas Fire ravaged the hillside leaving the area vulnerable to rapid erosion. Then on January 9 of this year, an unprecedented storm caused debris flow and mudslides that killed 23 people, destroyed 130 structures, and caused insurmountable damage.

The Los Angeles Times reports they conducted an eight-month investigation and found "government officials did not heed decades-old warnings to build bigger basins that could have made the mudslides far less catastrophic — and that Santa Barbara County failed to thoroughly empty the existing basins before the disaster, drastically reducing their capacity to trap debris." 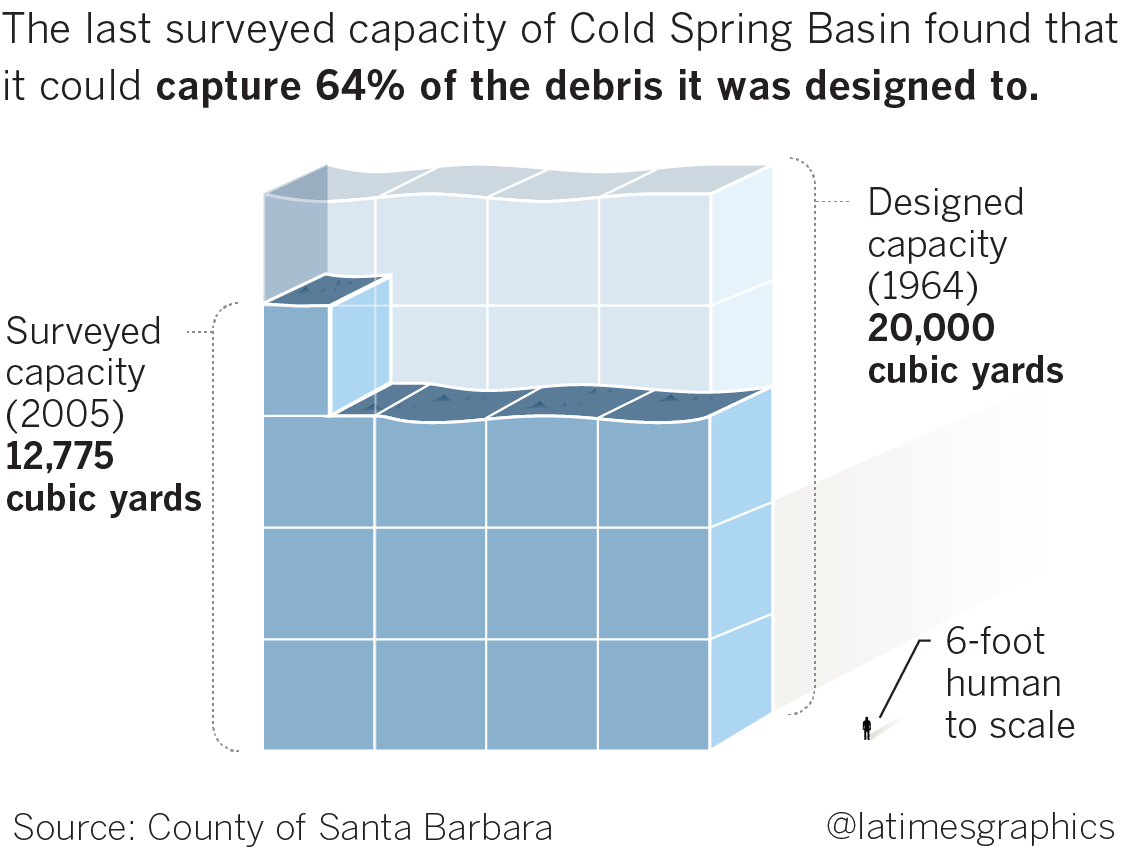 They further state that "Santa Barbara County flood control officials and the Army Corps had known for half a century there were too few catchments and that the ones they had were far too small to stop the enormous debris flows that the Santa Ynez Mountains were prone to produce."

Per a Santa Barbara County survey, the Cold Springs Creek catchment was cleared out in 2005, but the basin only had two-thirds of its capacity. The Times reports that during a major mudflow, that reduction would enable 7,000 cubic yards of storm debris that could have been trapped to flow into Montecito. According to records included in a 231-page county report on state of the flood control system, published mid-2017, the 11 catchments surveyed had only 44% of their designed capacity.

According to documents retrieved by the Times, neither the flood control agency nor the community was worried, and no officials remarked that the catchments were more than half full with sand and rocks.

Read the full report at latimes.com

I guess the gov't isn't the

how do you tell the