“A few years ago we were simply looking to find new office space downtown to suit the growth of our company, but this solution just felt like the right fit, location and timing for us and for the community,” said Radius general manager Brian Johnson. 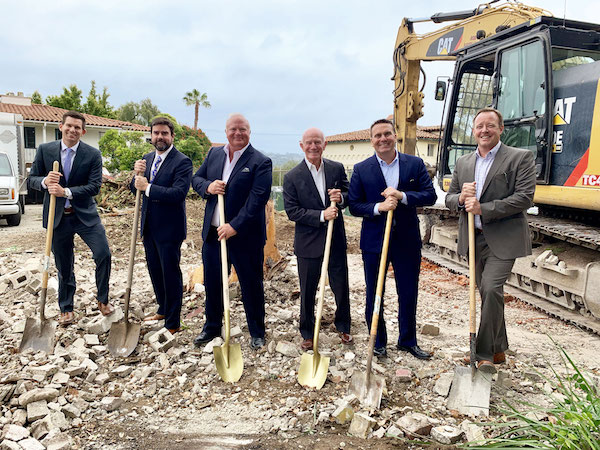 Radius and KIBO joined forces to put together a plan for development and renovation of existing structures on the site. In addition to construction of the new main office and apartment building located at 214-226 E. De La Guerra St. just east of Santa Barbara Street, the project will include upgrading two historically significant homes on the property which will also serve as residential rental units. “This property was underutilized with immense potential for development in a core downtown location,” said Radius principal Brad Frohling.

The city’s AUD program was a key impetus in spurring Radius principals to move in the direction of new development, according to Johnson. “Moving through this process has been a unique experience for us having represented many local clients in brokering property for this kind of use,” he said. “It’s rewarding to be a part of the solution to help keep Santa Barbara and downtown vital. Now that we have permits pulled we’re ready to see this thing through.”

Construction is expected to begin within the next few weeks and projected to take about 18 months with completion in early 2021.

The project partnership includes a combination of Radius, KIBO and a small group of local investors. Radius will occupy the entire 5,500 sq. ft. first floor commercial space on a 10-year lease. The remainder of the property will include a 2,400 SF storage space; 25 one-bedroom and one two-bedroom market-rate apartments; and a below-ground parking garage with ample parking for all tenants.

“We’re honored to be working alongside the team at KIBO who have a reputation for creating high quality, innovative developments in the region,” said Johnson. Among KIBO’s award winning projects is the Montecito Plaza, more commonly referred to by its prominent restaurant, The Honor Bar, in addition to residential developments in both Montecito and Santa Barbara.

Upon completion, Radius will move its full Santa Barbara operations from its current two-story space at 205 E. Carrillo St., located just a few blocks north of the new property. Radius also maintains an office in Ventura.

“We love our space but our team is excited to finally be able to spread out on the same floor,” said Johnson.

Keep cramming in more and more housing. Pretty soon people will be forced to ride bikes and walk because it will be quicker than driving in bumper to bumper traffic. Too bad all that car exhaust will give the pedestrians and bikers lung cancer.

Where are all the cars to be parked?

the plans on the city website state 43 parking spaces will be available underground. not terrible in my opinion actually

One parking space for each unit, plus additional parking for the businesses on the ground floor. Not enough. Even in LA they allocate more than one parking space per unit in new developments!

This is a press release.

5,500 more square feet of empty commercial space downtown, off on a side street?

If this was approved with instigation from the AUD program what affordable housing does it provide? (Leaving aside the truth that AUD "affordable" is not reachable by middle class folks at all.) "Market rate" housing is not going to "keep downtown vital."

Factotum: Market rate housing existed about 30 years ago in the downtown area. Then there were affordable SRO rentals which those on limited income could afford. There was a stability to the area. Then they brought in "urban renewal" which distorted the market and subsidized higher rental hotels/motels and condos. Let's go back to a true free market and have the owners of the downtown properties give up subsidies and tax dodges and write offs and actually have to pay their mortgages on income. Things would get a lot different real fast. Welfare for the wealthy is what is mostly to blame for what State Street businesses look like now.

There was a prior development plan for this property that had been approved several years prior that was even more intrusive. This was a heavily debated project and let to a split decision by the Planning Commission. The deciding vote agreed the prior project approval which would have been re-instated has this over-bearing project been approved, would have been a lot worse. Pays to stay involved in what your city is doing to you, and understand why it intends to keep doing this to you. You make a difference only when you vote in new voices to represent the community's interests; not just the city employee union interests.

Please find prepared, informed elder locals to run for Council. Santa Barbara must pause in all this growth. High density is not safe in this geographic location without heliports on every roof. January 20, 2018 proved how easily it is to entrap an entire community. There are 4 seats up. Find 4 candidates who are solid, financially and politically independent, thinking of unintended consequences. No more controlled inexperienced, young giveaway the town groupies. No more reclaimed highly concentrated sewer water for drinking because the population cannot be sustained. Safety first! .

Yup, there was a few candidates running last election that were politically independent and QUALIFIED, but they were not democrats, so they lost. Last I checked, your party should not matter when it comes to local politics.

No worries: Gentrification and "get-away" 2nd, 3rd or 4th "homes" for the wealthy and corporate "get-aways" on the first turn-over will run out the "undesireables" shortly.

You are spot on. We are in a narrow bowl between mountains and ocean with only the 101 out. People burned to death up north because their road out was blocked by fire. Most other cities that get this populated have the space and infrastructure to allow people to get out in multiple directions in an emergency. And speaking of sewer water, I live where my household gets 100 percent desalinated water and at least 70 percent of the time the water is either "swampy" or so full of some strong chemical it makes your eyes water to breathe the fumes coming up when you even wash your hands. My daughter gets skin rashes from it. Other desal plants in California mix the desal with other water. Santa Barbara the only city that forces an unprecedented 100 percent desal onto residents in certain areas, despite the fact we should have enough water from our usual sources for everybody if we didn't exceed reasonable population limits. But the city does not care about the higher expense of desal or problems with it--they only care about stuffing in more people.