A new hotel is proposed for Linden Avenue in the downtown corridor of the City of Carpinteria.

The 30-40 room hotel is planned to replace a parking lot next to the railroad tracks on the southwest corner of Linden Avenue and Fifth Street on city-owned property. It's the same location where the Carpinteria Train Station once stood before being demolished in 1969.

On Monday evening, project architects from AB Design explained their vision and design elements during a virtual meeting with the Carpinteria City Council, the Carpinteria Planning Commission, and the Architectural Review Board.

The development team consists of four families from the Santa Barbara and Carpinteria areas who plans to "partner with local architects, land planners, and engineers to ensure that every part of the Surfliner Inn - from the design and construction to its everyday operation - adheres to our community-based mission and vision," according to their website.

The 18,000 square foot hotel will include a rooftop bar and ground-level cafe with the overall site including a new parking lot, pedestrian under crossing of the railroad, a community garden, and connecting trails.

Others opposed the project stating it will negatively affect the small beach town charm and over commercializes as one person stated over 1,000 Carpinteria residents oppose the hotel.

The informational meeting did not include a vote from the city boards.

Learn more about the project at thesurflinerinn.com and the City of Carpinteria website. 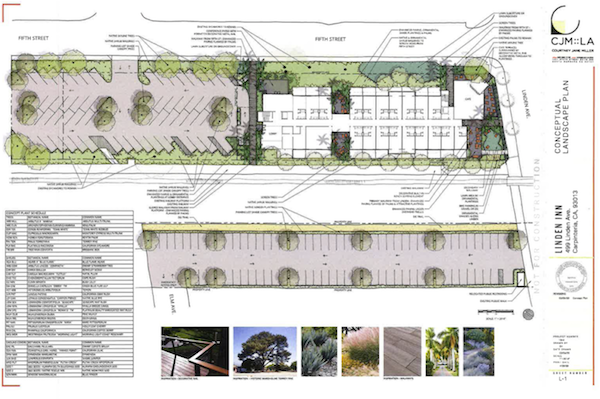 Yeah, I live in and love Carp. Very few folks in our town want the hotel. Ya can't keep the small town vibe by filling up every square foot of space on Linden.

Most Carpinterians are not in favor of this project as it diminishes the character and charm of Carpinteria.

Cut it down to 1/4 size, eliminate the new parking lot on the existing open space (future park) on the beachside of the RR tracks, and it would be great. As proposed, it's too big, too tall, too imposing on beachside neighbors, and adds too much traffic to Linden Ave which is the only way in and out of the beachside 'hood. The City wants to lease the land to the hotel operators on a very long term lease. No, just no.

I hope they provide the guests with earplugs because the train is going to be just a tiara's toss away from the beachside bedrooms.

Cool 1966 Cadillac in the artist’s rendition. We should require the hotel builder to give one to every resident of Carpinteria.

Possibly the hotel was being planned for several years, which would be looooooong before most of us had ever heard of Covid. I personally hope they start building it sooner than later soze I can take the train to Carp, check into the hotel, walk over to Island brewing, have too many beers, then up to The Palms for a Shhhhhhrimp and Steak dinner, then waltz (stumble?) back to my hotel room. The next day I'd walk up to Foster's Freeze for one of them muy delicioso Pineapple Milkshakes and order of Onion Rings. Something like that I'd like to do when they build this new hotel.

Oh no! Verified = Foster's in Carp is Closed Forever (and ever). So, then I'll just go back to Island Brewing the next day in lieu of the delicious Pineapple Milkshake at Foster's.

Can we please just get through this “pandemic” without all the rampant building. Jeez. I don’t think this should be considered essential of all things.

The pandemic will be a very distant memory by the time they break ground on this project. Looks like a great upgrade for Carpinteria but still a great beach vibe. Shabby Shic.