It’s a New Year and a new life for Gigi Schneider, one of six people chosen in 2017 to move into El Carrillo, the only apartment complex in Santa Barbara exclusively serving a formerly homeless clientele.

Schneider turned 39 on Christmas Day at the Spanish-style building near the fire station on Carrillo Street, her first real home in four years. She became homeless after a divorce, she said, when, unable to pay rent with a part-time job, she started bouncing between homeless shelters, her Mom’s apartment and the street, sleeping in cars to stay warm.

Schneider, who has been blind in one eye since early adulthood, said she lost the sight in her second eye during her years on the street as “the light started closing more and more.” So it was a gift, she said, when she was recently able to move from the Salvation Army’s Hospitality House into a cozy third-floor studio at El Carrillo, one of 61 apartments there.

“Merry Christmas to me!” Schneider said over the holidays, seated on a neatly-made bed with colorful pillows. “I got a home; that’s my present. It’s been a long struggle. You’re trying to mend your heart when it’s shattered into a thousand pieces.

Schneider is one of only 123 homeless people in Santa Barbara County who were placed in permanent housing in 2017 by county and city housing authorities and Peoples’ Self-Help Housing, a nonprofit group. That’s out of a total homeless population of 1,860, or about 1 out of every 15. The population count is tallied by the U.S. Department of Housing and Urban Development (HUD), based on a “point-in-time” survey that was conducted last January 26 by the Central Coast Collaborative on Homelessness (C3H), a countywide program. 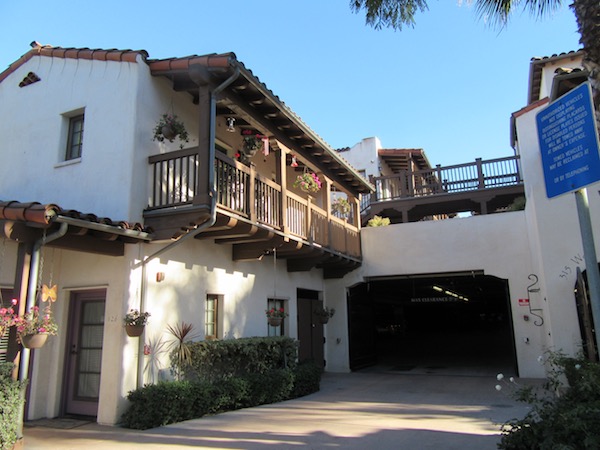 El Carrillo, at 315 W. Carrillo St., serves 61 formerly homeless individuals and provides onsite mental health services and a live-in property manager.
As of last January, the HUD data show, only half of the county’s homeless were living in shelters. The survey also showed that 226 people, or 12 percent of the total, were chronically homeless. That is, they had been on the street repeatedly or for long periods of time, and they had a disability such as mental illness, chronic medical problems or a chronic disorder stemming from alcohol or drug use.

Local governments and nonprofits in Santa Barbara County currently use an ad hoc system of triage to place the most vulnerable among the homeless into scarce housing, a difficult task that’s getting harder under the Trump administration.

In the City of Santa Barbara alone, there are 1,634 households – representing 3,675 people, including some who are homeless – on the waiting list for federally subsidized “Section 8” rent vouchers, said Rob Fredericks, executive director of the Housing Authority of the City of Santa Barbara. No new vouchers will be issued in 2018 because of federal cuts in the program, he said.

“State and federal funding alone can’t make a dent in homelessness,” Fredericks said. “We’re living in an age where everything is being put back on local communities.”

Now, under the direction of United Way, a national nonprofit organization, a new initiative called Home for Good is underway in Santa Barbara County. A major goal, organizers said, is to speed up the placement of the chronically homeless in permanent housing, complete with onsite mental health services and a live-in property manager.

In Los Angeles County, Home for Good spearheaded the successful passage in November 2016 of a $1.2 billion bond measure and a sales tax measure to help house and support a portion of the county’s 58,000 homeless. The sales tax measure, a quarter-cent increase, is expected to generate $355 million yearly for 10 years. 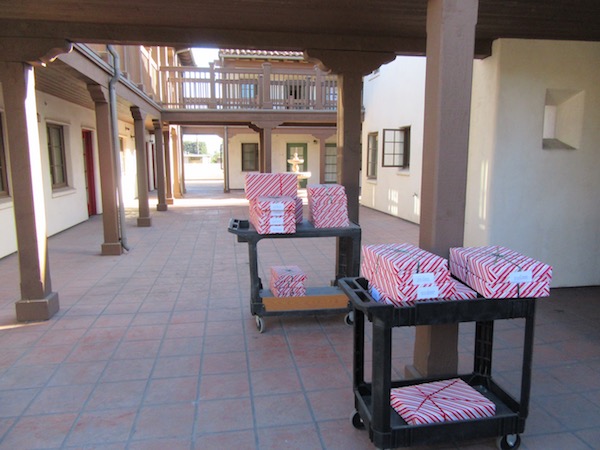 Holiday gifts awaited 61 residents of El Carrillo, one of only two apartment complexes on the South Coast exclusively serving formerly homeless individuals. The other is Pescadero Lofts in Isla Vista.
In Santa Barbara County, Fredericks said, “We need to create an ongoing source of funds, either through bond measures, a portion of sales tax, or an in-lieu fee for developers that could go toward housing development. I think that’s absolutely going to be a requirement. The communities that are showing success with homelessness have funding avenues like those, that we don’t have. That’s the end result we want for Home for Good.”

The move to Home for Good was approved by the C3H policy council of elected officials in December. The annual C3H budget of $400,000 has been transferred to Home for Good, Taylor said; the council will be expanded with representatives from nonprofit foundations, hospitals and city and county housing authorities and renamed the Home for Good Santa Barbara County Funders Collaborative.

“It will help create public and political will to address homelessness at a level that finally solves the problem,” Taylor said.

Steve Lavagnino, the former C3H chairman and a county supervisor for Santa Maria, said C3H “had great intention, but we were spending a lot of time on meetings and plans.” Similarly, Lavagnino recalled the county’s “10-Year Plan to End Chronic Homelessness,” optimistically announced by a task force in 2006.

“The money needs to go to basic outreach and housing,” he said. “I’m glad to see United Way take this up, and I think they’re going to be more successful.”

This Jan. 23, the county Board of Supervisors will be asked to ratify a memorandum of understanding allowing United Way to serve as the lead agency in the county for local homeless outreach, assessment and placement. Under stringent HUD rules that go into effect the same day, all counties that receive federal and state funding to house the homeless must create one homeless database and rank the neediest among them on one master list.

The new rules bar participating housing providers from denying a home to anyone on the list because of low or no income, a history of substance use and eviction, or even resistance to receiving services.

Meanwhile, back at El Carrillo, another newcomer is counting his blessings in the New Year. Paul (not his real name) said that before he moved in, he had been homeless for seven years, first couch surfing, then living on the street, then at the Casa Esperanza shelter, and then the Rescue Mission, with short stints in county psychiatric facilities. It all started in 2010, Paul said, when he lost his job as a business consultant at age 57 and relapsed into a severe depression, an old affliction.

“I could barely move,” Paul said, describing how on sunny days he used to stand under a tree, following the shade “like a living sundial.” On rainy days, he said, “I became so afraid, almost phobic. You can’t sleep outside in the rain.”

Paul asked to remain anonymous because, he said, “I’m kind of embarrassed about what happened to me.” On a recent weekday, he showed a visitor all the things he had purchased at the Goodwill center across the street, including an elegant glass for only 99 cents (“It must be Waterford crystal!” he said) and the abstract painting that matched the sheets on his built-in bed.

“I started nesting,” Paul said. “It’s almost like a monk becoming a consumer.”

Paul said still visits his friends at the Rescue Mission, his “alma mater,” but doesn’t miss sleeping in a dorm.

“Coming here is a piece of heaven,” he said of El Carrillo. “I pinch myself a lot. I remember the first night I slept here. It was the quiet – to be able to lie down and rest. Nobody was yelling at me or having a conversation with themselves.

“This overjoyed person you’re seeing? That’s different from the person I was before I got here.”

Thanks for posting another great piece of journalism by Melinda Burns. And such a positive story to share! Thanks Melinda and thanks EdHat

This is great news. How does one get involved (volunteer/donate) with this movement?

I am a science journalist who

Based on information that’s

Hurrah! Massive thanks to all

When you look up his name in

Always nice to read something

It is very expensive to

Maybe someone who knows