An oversized golden sculpture of a gorilla has been installed at the Santa Barbara Zoo, just days before more than 30 gorilla experts and keepers arrive for the Western Regional Gorilla Workshop. It was installed today (Thursday, November 2) and will be on view outdoors, adjacent to the Zoo’s courtyard, for at least one year. 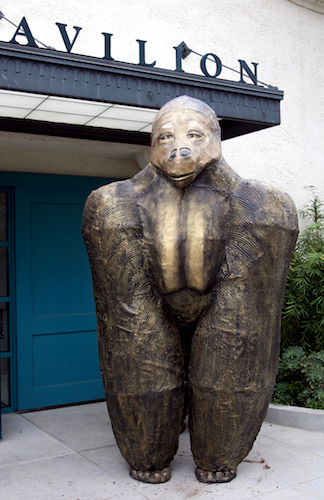 Local artist Morris B. Squire (1923 - 2014) created the piece in 2009 in his Santa Barbara art studio with a team of artisan apprentices. It is made of fiberglass over a chicken-wire frame, and painted with gold acrylic paint. It is one of three works in his Animal Series, which also includes a tiger and a panther. All three were previously on view for six years at the San Diego Zoo in Balboa Park.

“It’s hard to miss a 12-tall golden gorilla,” said Michele Green, Curator of Mammals, who organized the conference. “This sculpture is a wonderfully realized tribute to this magnificent and endangered species. Visitors also can see Western lowland gorillas here at the Zoo. Nzinga and Bangori are two brothers who comprise our ‘bachelor troop.’”

The gorilla sculpture is on loan from the Squire Foundation, located in Santa Barbara, which has made more than 100 loans of Squire’s work to dozens of public spaces from Chicago, Illinois, to Phnom Pehn, Cambodia.

“The Animal Sculpture series is thought by many to be some of his most purely joyful work,” said Ashley Hollister, Executive Director of the Squire Foundation. “The animal alone does not look like a stereotypical zoo animal, it has been changed in size to engage the viewer’s interaction with the piece.”

The Western Regional Gorilla Workshop runs November 6 to 8 and is hosted by the Santa Barbara Zoo. Zoo professionals who work with gorillas will meet with species experts to discuss conservation, husbandry, best practices and more. For more information, visit www.sbzoo.org.

What does a 12 foot golden Gorilla eat...,,.Anything it wants.

Poor innocent incarcerated animals. My heart aches for each and every one of them.

Has everyone received their