On May 28, 2017, the CPUC acted to ensure that phone numbers continue to be available to meet demand in the geographic region served by the 805 area code by approving an area code overlay. The overlay will provide additional numbering resources while minimizing customer inconvenience. With the 805/820 area code overlay, customers must dial "1" plus the three-digit area code for all calls from telephone numbers with the 805 and 820 area codes.  Customers may begin to use this new dialing procedure on December 1, 2017, when residents and businesses with an 805 area code telephone number may begin dialing 1+ area code + seven digit telephone number when making all local calls.  The new dialing procedure will become mandatory for all residential and business customers on June 2, 2018.  The new area code that will be added to the 805 region, which serves small portions of Monterey and Kern Counties and most of San Luis Obispo, Santa Barbara, and Ventura Counties, is 820. Read our press release for more information. You can also read our reminder!

The process began on November 17, 2016, when the North American Numbering Plan Administrator (NANPA) filed an application (A.16-11-008) with the CPUC to introduce a new area code to the area now served by the 805 area code.

The 805 area code was forecasted to use up all its available prefixes by the 4th quarter of 2017. Adding a new area code to the 805 area code region provides additional prefixes and ensure new telephone numbers are available for the new customers.  The telecommunications service providers proposed to add the new area code using the overlay method.

Public Meetings were held on August 22 and 23, 2016, in the Cities of Oxnard, Santa Barbara, and San Luis Obispo.  At these meetings, two options for introduction of the new area code were discussed and explained. 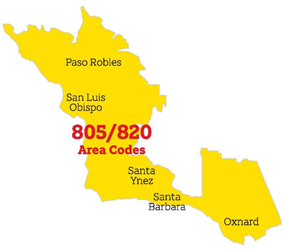 Attendees spoke at the meetings and provided written comments about their concerns.  While most attendees supported the overlay option, because it allows them to keep their existing phone numbers and area code, some attendees preferred the split option, as they found the 1 + 10-digit dialing associated with an overlay to be burdensome and wanted to maintain the 7-digit dialing within their own area code.

The CPUC appreciates public feedback concerning area code relief for the 805 area code.  You may submit comments by:

Come to think of it Westmont

...and there will be a lawyer

What's he claiming the car

At the rate Lompoc's City

Funny I thought the same

At least this time it's only