Families across the nation are feeling the impact of the infant formula shortage. Efforts to mitigate the shortage are ongoing at the state and national level.

Parents and caregivers who face a shortage should call their healthcare providers first to help them navigate formula options when supplies are scarce.

Parents and caregivers are advised to NOT dilute formula or use homemade recipes for substitution as this can seriously harm a baby's health. Homemade baby formula recipes on the Internet may seem like the solution, they can be dangerous to your baby's health. Pediatricians warn that homemade formula may not be safe or meet your baby's nutritional needs.

Babies usually tolerate alternative formula products except in the case of special therapeutic formula and that's why it's important to consult with their healthcare provider first to get help or to discuss alternatives.

Due to recent formula shortages, some stores may limit the number of cans that can be purchased per shopping trip. 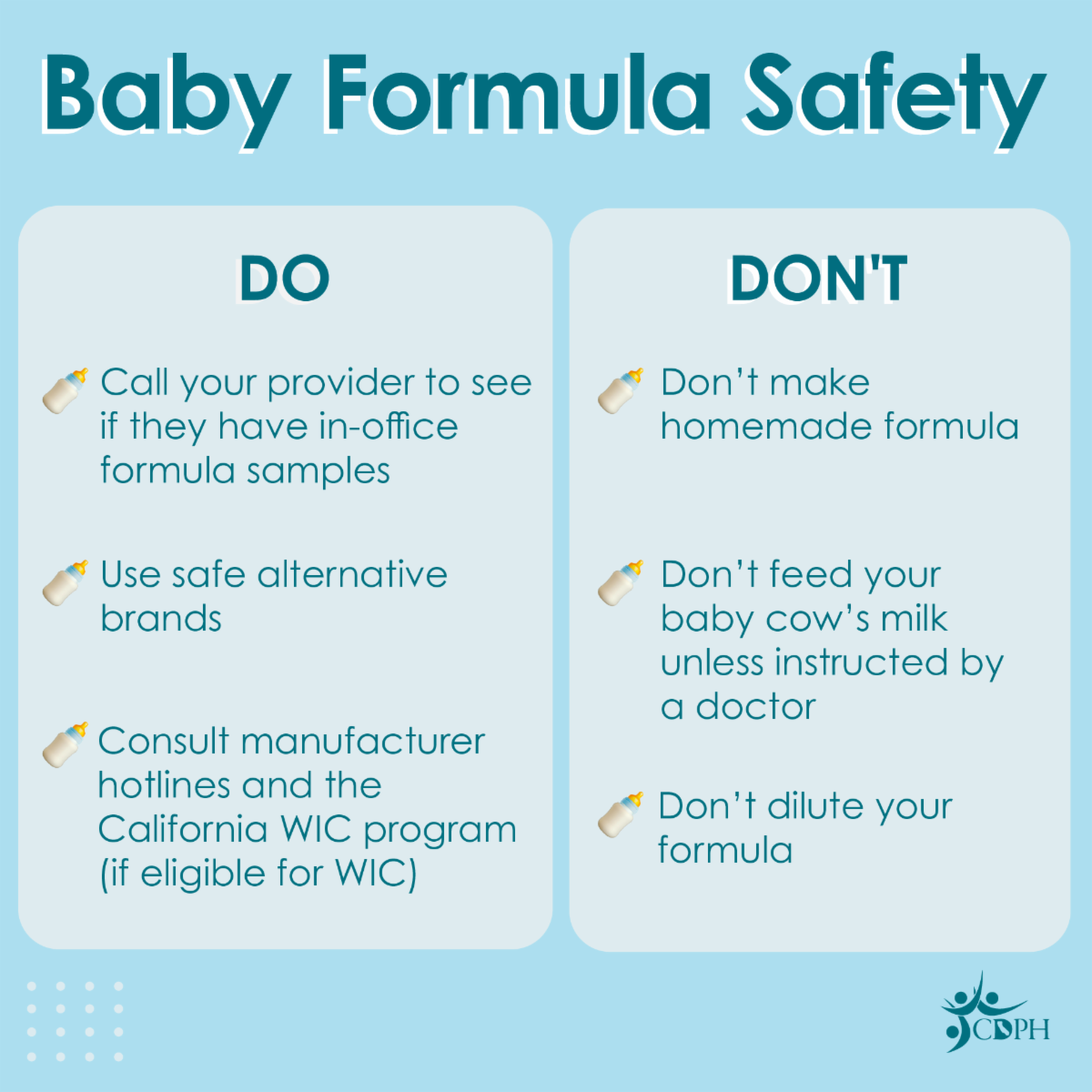 Click here for a list of WIC authorized stores and their phone numbers in Santa Barbara County.

Additional FAQ's and information can be found on the California Department of Public Health's website.

Don't ignore the specific facts of the Abbott plant and the whistle-blowing process:

"The Abbott Nutrition plant in Michigan that was shut down in February, sparking a widespread baby formula shortage crisis, had a leaking roof, water pooled on the floor and cracks in key production equipment that allowed bacteria to get in and persist, Dr. Robert Califf, the head of the Food and Drug Administration, told a House panel on Wednesday.
He detailed “egregiously unsanitary” conditions in the Sturgis, Mich., plant to lawmakers during a hearing, but he also acknowledged that his agency’s response was too slow in addressing problems at the plant.

Dr. Califf also acknowledged several ways that the F.D.A. had erred in addressing this problem: Its follow-up inspection in January should have started sooner, he said, adding that the agency took too long to circulate a whistleblower report that arrived in October but did not reach top officials until February.
The report of an anonymous whistleblower who said he worked in the Sturgis plant came up repeatedly during the hearing. The whistleblower alleged that safety staff there “celebrated” the F.D.A. overlooking problems after a 2019 inspection and did not destroy enough product when it found Cronobacter in finished products. That top agency officials did not see those claims until February “is stunning to me,” Mr. Palmer said. https://www.nytimes.com/2022/05/25/health/fda-baby-formula-shortage.html

"Last week, the Justice Department announced a consent decree with Abbott on the conditions required to reopen the Sturgis plant, and the company could face heavy fines if it does not comply. In a complaint supporting the decree, officials described contamination with Cronobacter bacteria in finished baby powdered formula lots as long ago as 2019 and 2020.

Abbott officials “have been unwilling or unable to implement sustainable corrective actions to ensure the safety and quality of food manufactured for infants,” the complaint concluded.

Cronobacter sakazakii bacteria thrive in dry conditions, like powdered foodmaking. Only one state, Minnesota, requires doctors or labs to report cases of food-borne illness from the bacteria to public health authorities, who, in turn, are supposed to alert the C.D.C., The New York Times has reported.

Senator Tammy Duckworth, Democrat of Illinois, urged the C.D.C. to change the protocols. “Our nation’s inadequate reporting system results in critical data gaps that undermine our ability to understand the true scope of Cronobacter infections in infants,” according to the letter she sent on Wednesday.
At the subcommittee hearing, Dr. Califf agreed that reporting should be required of cases involving the bacteria."

I thought one of the things the pandemic shortages taught us was that we need to retain certain capabilities within our borders. I'm not generally a fan of tarrifs, taxes as protectionary measures but the dairy lobby is powerful, and there was a lot of fear about shortages. (remember the toilet paper hoarding?) COVID really messed with our feelings of insecurity and also showed us where the global supply chain shortcomings were

Send a thank you note to Biden for managing all aspects of supply, production, economy and prices !!!
Remember the $3.7 regular prices just 18 months ago ? 5.7 is the cheapest now !

This is just one of the many effects of Capitalism - 4 companies control all of the supply, ironically the standards for baby formula are higher in Europe, but that formula is not allowed into the U.S. Also not impressed with how these companies, mainly Nestle, have representatives in poorer developing nations, telling the mothers there "Don't breast feed your babies. Our formula is much more nutritional and you can do the same as mothers do in the U.S.". Maybe they are given a 2 week supply for free to get them started. Then, when their milk dries up, there is no alternative.

It makes sense to keep production of baby formula a viable business in the USA, but with all tI'm shocked there are even four suppliers, because the smaller players can't get started without a huge amount of capital just to cover the regulatory costs and a WIC contract.
Without the bit of capitalism we allow, you'd have one state run supplier

Here is a pretty good explanation of how the baby formula shortage came to be. Ironically, the WIC noted in the article above played a central role in creating the conditions that have led to the shortage.

America First? From the article above " Infant formula that can be imported is also subject to an added tax of 17.5%. The United States‐Mexico‐Canada Agreement adopted by the Trump administration in 2020 also restricts infant formula imports from Canada, part of an effort to protect US dairy farmers from being undercut by Canadian rivals. "

Start by policing your own

Anglers in California have

I can see how that fits into

Yes it was sad to say.. that

They do. That’s basically 90

Absolutely ridiculous that we

Jeez, talk about a premature

Hello, and welcome to the Hot