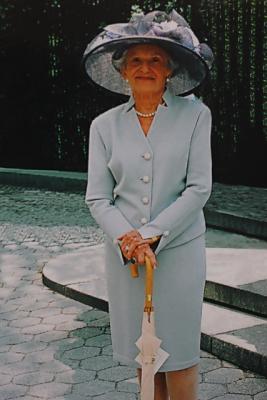 Natalie Myerson passed away peacefully at her home in Santa Barbara on September 19, 2022.  She was 102.

Born Natalie Salter in Chelsea, Massachusetts on March 16,1920. She grew up in Brookline, Massachusetts with her parents and three older brothers. The Salter family often summered at a family home on Cape Cod. Natalie graduated from Goucher College in Baltimore, Maryland in 1941 as an English major, as she frequently reminded her children. Returning to her parents’ home in Brookline following college, she met a handsome young naval officer, Raymond Myerson, who was in officer training school in Boston as part of his naval service in World War II. They married in 1943 and enjoyed 63 years of wonderful marriage  until Raymond’s passing in 2006.

Following the end of World War II, when Raymond returned from naval service, Natalie and Raymond moved from Boston to Chicago, where Raymond had grown up and his family resided. Living first in Chicago, where daughter, Bette, and son, Toby, were born, Natalie and Raymond later moved to Highland Park, a northern suburb of Chicago on Lake Michigan. There they lived until 1964 when Natalie and Raymond, along with son, Toby, moved to Brentwood, a suburb of Los Angeles. While Natalie, Raymond and Toby went West to Los Angeles, daughter Bette went East to attend Wellesley College. Natalie and Raymond lived in Brentwood and then Century City in Los Angeles until 1973, when they moved to Santa Barbara. Natalie often remarked on the wonderful gift of being able to live with Raymond in beautiful Santa Barbara, where she resided for 49 years.

Natalie was frequently honored. She was honored by the National Women’s Committee of Brandeis University, Santa Barbara Chapter, as Woman of the Year in 1998.  She and Raymond were honorees at the Anti-Defamation League annual dinner in 2001. Natalie was named a Woman of Valor by the Women’s Division of the Santa Barbara Jewish Federation in 2009.  She was the first honoree of the Center for Successful Aging in 2014.  She and Raymond (posthumously) were honored at the Leadership Circles Dinner of the Santa Barbara Museum of Natural History in 2019.

Natalie is survived by her daughter, Bette, son, Toby, and his wife Rosalind and her grandchildren Marshall and Marissa, numerous nieces and nephews, one sister-in-law, and 45 “courtesy” daughters and 7 “courtesy” sons (who were her numerous younger friends achieving the status of “courtesy” daughter or son), as well as many friends, family and loved ones.
A memorial service will held at Congregation B’nai Brith. In lieu of flowers, Natalie and her family would appreciate donations to any nonprofit organization the donor chooses.

A poorly-written story: both