Before the pandemic, Cherland was working full-time as a musician and composer, often at local wineries, bars, weddings, and even edhat anniversary parties.

When COVID-19 effectively shut down California in March last year, everything closed and the local entertainment scene evaporated. Musicians were suddenly out of work with very limited options in a new world with new rules and worried about safety.

"Not many people understand working conditions for musicians. We're placed in corners while drunk people lean in waaaaay too close and ask us to play Bob Seger for hours at a time," said Cherland. "The pandemic put a spotlight on the need for musicians to prioritize their health and hold boundaries with their employers. If we get sick, we can't work (singing while sick is a nightmare, not to mention unsafe for those around you). I've turned down a lot of work thinking that I'd be at risk, or putting others at risk."

While Cherland was able to find some work online offering musical relief during business meetings and online beer tastings, he decided to test small outdoor concerts. He began offering socially-distanced shows in backyards or neighborhoods to anyone who had space to invite him. 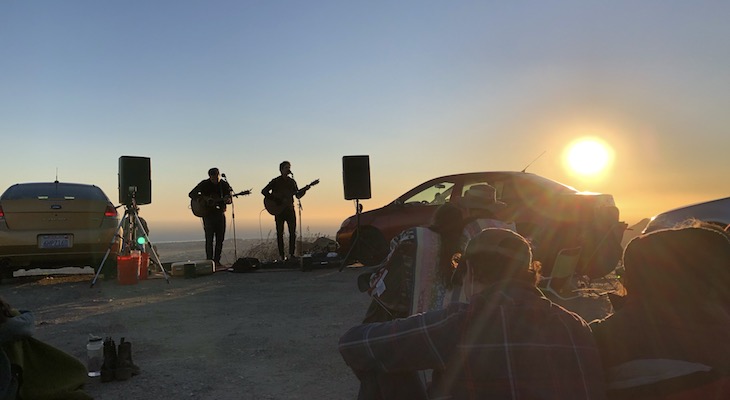 "It was a great way to experience community and to bring people together in a safe way. It was also a survival move - I needed money, and needed to completely redesign my business away from bars and wineries into safer spaces," he said.

Realizing that not everyone had space or funds to host a safe private gathering, he decided to try free shows in nature once a month where people could electronically donate whatever they could afford. The location remains a secret until the day of the event in order to urge people to wholly experience the music while also preventing chatty walk-ins while someone is playing.

"I think free access to beauty is a need of all people, especially during dark times," he said.

I had the pleasure of attending one of these concerts last month hosted by Cherland and fellow local musician Will Breman at a secret outdoor location off Highway 154. A small group of people arrived and were able to safely listen from their cars or in distanced chairs and blankets, all wearing masks with a stunning backdrop of the Santa Barbara coastline.

Breman, a semifinalist from the hit musical competition show "The Voice" in 2019, began singing a handful of songs for the crowd with several references to beloved Santa Barbara landmarks. Cherland followed playing a set of his own original songs in between witty jokes and observations. The two musicians then joined forces to sing several duets, the crowd-favorite being "Satisfied" from the musical Hamilton (see video below).

Perhaps the best part of the event was during a romantic duet when an audience member got down on one knee and proposed. The masked crowd cheered as they said yes.

In a full year of remote meetings, air hugs, and isolation, getting out of the house and being reminded of the beautiful Santa Barbara scenery and being safely immersed in musical creativity was a wonderful way to fill the soul.

Cherland agrees. He said he's been getting a great response from people who love to experience music outdoors, watch the sunset, drink their own alcohol at a reasonable cost, see artists collaborating, and feel like they're contributing to the career of talented musicians.

As COVID-19 case rates continue to decrease and restrictions loosen, Cherland plans to continue putting on these shows at least once a month with other artists. When it's safe to do so, he hopes this will help change the local music landscape.

"I want the SB music scene to expand and include more artists from Los Angeles and San Luis Obispo counties. We're not far from L.A., so a dedicated group of music lovers could eventually attract some really incredible L.A. acts," he said.

The next show will take place on March 21 at a secret location with New Zealand artist Andrea Lisa. To get on the secret concert invite list, send your name and number to info@connercherland.com or @connercherland on Instagram.

Cherland is available for private virtual and socially distanced outdoor concerts. He also hosts "The Conner Cherland Podcast" where he interviews local musicians and artists. Learn more about these at connercherland.com.