By the Lompoc Police Department

On 10-3-22, at 1439 hrs., officers were sent to a traffic collision involving a semi-truck and a motorcycle in the 1300 block of N H St. Upon arriving, officers located two subjects that were down with injuries. LPD officers learned a motorcycle was splinting lanes while traffic was stopped.

The truck driver felt the trailer move, looked back in his mirror, and saw the motorcyclists. The truck driver immediately stopped and reported the incident to the police department. The passenger and the rider were airlifted to trauma centers regarding injuries sustained to their legs.

Alcohol and drugs do not seem to be a factor at this time. Some witnesses were contacted. Anyone with further information regarding this incident is encouraged to call the Lompoc Police Department (805) 736-2341. 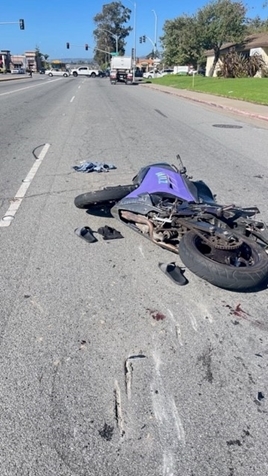 Injuries to the legs, they are so lucky that is how they fell! Sending healing thoughts

Wow that's horrific for all involved!

Nic - How do flip flops fit into this story?

915 - looks like a pair of flip flops near the bike

Thanks SAC, didn't notice that.

As a long time m/c rider, these unfortunates were NOT. Riding with slippers, bald tires, “passenger standing up” while rider is bridging lanes in town…. What could go wrong?

As a motorcycle rider with decades of experience I cannot imagine my passenger standing up while we are literally just a foot away, on both sides, from vehicles careening by.

Seems lane splitting is always a risk. At least it wasn't while traffic was going 70+. The guys that do that have a death wish.