Over 2,000 community members came together for the "Raising Our Light" event in Montecito on Wednesday evening, one year after the deadly debris flow.

A children's choir sang "Little Light of Mine" as flameless candles were handed out. Survivors provided healing words while the names of the 23 victims were read out loud followed by a moment of silence. Survivor Lauren Cantin, who lost both her brother and father, sang a touching tribute before a walk of remembrance began.

Community members walked along the Montecito streets that were covered in mud and debris just one year ago. It began at lower Manning Park and continued down San Ysidro Road, ending at All Saints-by-the-Sea Episcopal Church where a large beam of light shot into the sky.

Another beam of light is shining from the Montecito Inn.

An Evening of Remembrance in Montecito 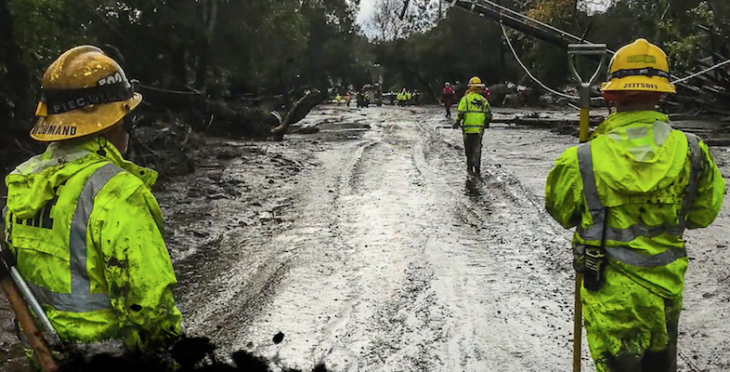 Community members have planned a "Raising Our Light" event in Montecito on Wednesday, one year after the deadly debris flow.

From 6:30-8:30 pm, all community members are invited to a walk of remembrance starting at Lower Manning Park with a short program leading into a candlelit processional down San Ysidro Road and ending at All Saints-by-the-Sea Episcopal Church with a bell ceremony and cup of soup.

The event is for everyone in the community and is meant to provide space in which to honor collective experiences. Event organizers hope the community will share a night of healing with one another.

Local leaders, members of the faith community, residents, and survivors will speak during the event. More details about the ceremony can be found here.

Stan Roden and Phyllis de Picciotto of Baba2Films produced the below video honoring firefighters and first responders who saved lives during this tragic event.

REMEMBERING JANUARY 9, 2018: Their Words, Their Photos from Stan Roden on Vimeo.

January 9 is one year since the deadly debris flow in Montecito that killed 21, with two still missing. We pause to remember those we lost that morning. These are but a few of the areas that were impacted that day, and how they look one year later. pic.twitter.com/QZHgyWUlMH

Weren't the rescue dogs who were "Grand Marshalls" in the Xmas parade local? I agree, a shot of two of the dogs would have been good, without them the 1st responders work would have been even more difficult.

That light high up in the sky was beautiful from my house on Milpas...

I would have liked to see at least a couple shots of the rescue dogs at work. I know the dogs weren't local, but still . . .

Santa Barbara Co. Search and Rescue has 4 rescue dogs and as Flicka said they were the Grand Marshals in the end of Dec. parade where people wear funny red hats.

Does anyone know if the TV documentary is going to be shown again? "The Night It Rained Boulders" was shown almost a year ago, but I think it's time for a repeat broadcast.

Well, yes you are correct. 5

Caltrans needs to do

County of Ed CAASP for the