Socializing at the Mission 1800's style. 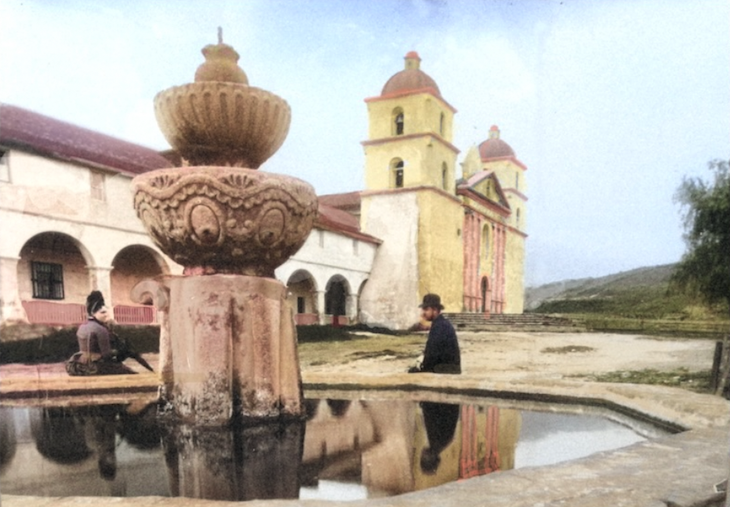 Best one yet, Joe! Thanks for sharing. I love the natural looking colors. You are getting good.

The picture is nice.

And I notice the complete lack of trees in the background.

If there were aerial shots from the 1850's of this area as we are blessed with by Wiley now, it would be very interesting to compare the changes as they occurred over the first 100 years or so.

Not quite the 1850s, but UCSB maintains a fantastic aerial imagery library that goes back to the very early 1900s. Most of it is free. https://www.library.ucsb.edu/geospatial/aerial-photography

I will keep saying this when edhat puts up these beautiful pictures of Old SB, that I sure wish SB was still like that here in the 21st century. I wonder if one was able to tote shootin' irons back then here in SB, I myself would have tote four .45 Army Colt Revolvers. Two shoulder strap holsters and two holsters around my waist. Be like Doc Holiday in the film 'Tombstone' of SB. "I'm your huckleberry."

Gimli: What a brilliant idea, we should go back to the good ole' days of bandidos and vigilante justice. Whenever I walk down State St., I also lament the lack of gun fights, syphilis, prostitution, and lynch mobs. But on your point of having macho lawmen as the protagonists, I need to disagree given recent events. Apparently 2 gay men are better at subduing an active shooter than 350+ Texas cops.

You're a walking contradiction Sac. 2 unarmed men, one time, were able to stop the mass shootings so we don't need guns to stop mass shootings.... So if a someone survived a car crash without a seatbelt, we don't need seatbelts? What about the times a good guy with a gun STOPS something bad from happening, just going to ignore all those because that one time two unarmed guys were able stop something?

VoR: The "good guys with guns stop bad guys with guns" is an oversimplified and unrealistic myth, to the point of being childish. There was a shooting in Texas of several police officers in a crowded area, I forget which city and when (too many shootings by well-regulated militia members to remember). The responding officers said they took longer to find the shooter because a bunch of wannabe Doc Hollidays were waving around their guns. Also, almost every "bad guy" with a gun believes they are the good ones! So that narrative is garbage. Plus, by that logic since the US has the most law-abiding citizens with access to firearms out of all developed countries, wouldn't it be the safest developed country? I think the main takeaway from this is that we need more gay bars to protect people. 2 unarmed gay clubbers over 350 heavily armed and armored hick cops is a pretty good record.

Also, "2 unarmed men, one time, were able to stop the mass shootings so we don't need guns to stop mass shootings" - You're wrong. It wasn't just "one time," this has happened plenty of times. See links below to prove yourself once again, wrong.

But yeah, the fact that unarmed people were (ONCE AGAIN) able to stop a mass shooting from becoming worse, IS proof that guns aren't always needed to stop guns. Not saying good guys with guns (like Uvalde PD) aren't always there to stop them (oops....), but.... oh never mind. You'd say the sky was red if God himself plus every single scientist on Earth at the same time explained to you that the sky is blue....

Some instances where unarmed citizens stopping mass shootings from getting worse:

But let's talk about gun laws preventing things like this from happening. The Colorado shooter was arrested last year for threating his mom with a bomb, a BOMB! Yet he was able to pass a background check because his charges were dropped. CO is also a red flag law state. Rather than enacting NEW laws maybe we should try enforcing our CURRENT laws.

Voice - quit picking on CO that's too easy of a target...

All this hot air is always spent on what "responsible gun owners" could hypothetically do. Then make them responsible! Make psychological requirements, safety courses, and a more extensive licensing and background check policy, like almost every other developed country has. The cosplaying cowboys will never vote for that, because at the heart of the issue isn't freedom or the constitution or blablabla. It's money from gun sales. Our political system is driven by money, and gun sales have been judged by about 50% of politicians to be more important than human lives.

Then they deflect to mental health sometimes, depending on the shooting of the week. Then pass some mental health bill! They don't, because they're hot air lying trash.

If you make your decisions based on actual data, rather than tribal opinions, you would know that decades of studies show that possessing a firearm endangers you and your family and acquaintances more than if no firearms were present, and the hero with a gun scenario is overwhelmingly mythical.

BTW, the man who took down the shooter is a vet named Richard M. Fierro, who was there with his wife and daughter whose boyfriend was among the murdered. A hero indeed. He beat the crap out of the shooter with the pistol the shooter pulled after dropping the rifle when Fierro tackled him.

CO also has sheriffs who publicly declared they would not enforce red flag laws...

However, nearly half of Colorado's counties have responded to the bill, passed in the new Democrat-controlled statehouse, by declaring themselves "Second Amendment sanctuaries."
https://www.cbsnews.com/news/several-colorado-sheriffs-say-they-wont-enforce-red-flag-gun-law-60-minutes-2019-11-15/

This rings home for me, as when I was a teen, that fountain was a favorite meet up spot where I'd meet friends and the occasional "interest."