Mr Welch has been located alive near a remote area known as Fish Camp. Earlier this morning search teams reached a sign in book, called a trail register, placed for travelers to record their journey. It was determined that Mr. Welch had signed the register. The location is approximately two-thirds of the way from the beginning of the hike which greatly reduced the primary search area.

Starting at sunrise, search teams were deployed at several points along the trail, including the teams that spent the night in the wilderness. Several of the teams had to be deployed into the area by helicopter due to the remote and extreme terrain.

At approximately 11:20 AM, one of the teams located Mr. Welch. He was extracted by helicopter and flown to Cottage Hospital with signs of dehydration and heat exhaustion. His dog, Davie, was in good health and walked out of the area with the search team. He will be checked by a Veterinarian who is at the scene of the incident, before being reunited with the family. Mr. Welch had covered approximately 38 miles of the 40-mile journey. The excessive heat may have been a contributing factor in this incident.

The Incident Commander of the search commended Mr. Welch for contributing to his own rescue. He provided his route and expected duration to a family member before his departure. He utilized the trail registers posted along the trail which allowed search teams to narrow their search area. The Incident Commander stated that one of Mr. Welch’s biggest advantages was maintaining a positive attitude during the unexpected turn of events.

The Santa Barbara County Search and Rescue team is an all-volunteer group whose members train, practice skills and maintain equipment required to conduct search and recue operations in a variety of environments. Although specializing in locating people in the back country, they are trained and respond to swift water rescues, alpine operations, tracking, and are highly trained in technical rope rescue. The team has maintained membership in the Mountain Rescue Association for over 35 years.

As in the case of this incident, even the most experienced hiker can fall victim to unplanned weather changes, dangerous animals or other hazards. Hiking safety tips can be found on the Santa Barbara Search and Rescue webpage at www.sbsar.net 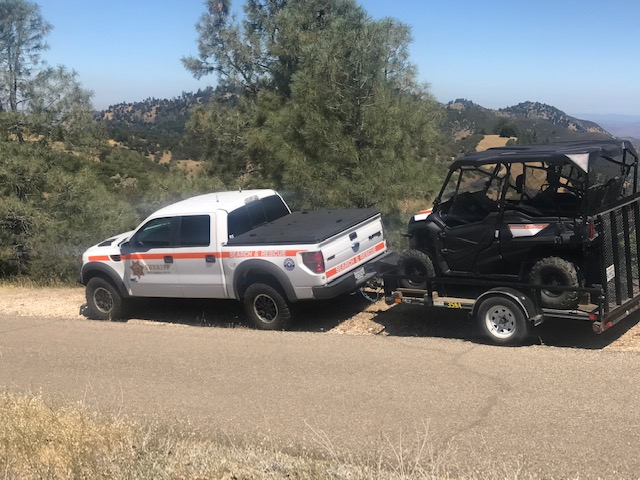 The Santa Barbara County Sheriff’s reports a hiker in the Sisquoc Canyon area of the Los Padres National Forest has been found safe.

Wesley Welch, 46-years-old of Santa Barbara, was located on Tuesday around 11:30 a.m. and Search & Rescue crews are using a helicopter to assist with the rescue.

The condition of Welch's dog Davie is unclear.

Any further information will be added to this article as soon as it's available.

The Santa Barbara Sheriff’s Search and Rescue Team is currently involved in a search for an overdue hiker reported Sunday evening. 46-year-old Wesley (Wes) Welch of Santa Barbara, with his dog Davie, left for a 40-mile hike in the Sisquoc Canyon area of the Los Padres National Forest and San Rafael Wilderness early Friday morning July 26, 2019 and was expected to return Sunday evening, July 28, 2019.

By dusk on the evening of Sunday July 28, a family member had not heard from Mr. Welch and notified the Santa Barbara Sheriff’s Office that he was overdue on his planned hike. Mr. Welch provided his family member with his planned route and expected time of return in advance of his departure.

The Santa Barbara County Sheriff’s Search and Rescue Team was notified and responded to the area. Mr. Welch’s vehicle was located at the Manzana Trailhead a little after midnight, indicating he may still be on the trail. A search plan was developed and Search and Rescue members were notified of the upcoming search for Mr. Welch.

At approximately 5:00 AM, Monday morning the Santa Barbara Sheriff’s Search and Rescue Team began the search for Mr. Welch. 17 SAR members, several patrol deputies, some on ATV’s, and a helicopter searched the route Mr. Welch provided to his family member. Mr. Welch was not located and team members continued following the 40-mile trail throughout the day.

Due to darkness the search was suspended, however teams were inserted by helicopter to spend the night in the wilderness area and resume the search at first light. Additionally, a request was made to adjoining agencies for a helicopter/plane equipped with night vision to conduct a search during darkness in an attempt to locate Mr. Welch.

A request has been made to the California Office of Emergency Services for an additional 40 search members and additional helicopters to resume the search on Tuesday, Ju ly 30. 2019.

This incident will be updated as information becomes available.

Wesley Welch has been missing since Sunday. He is a business manager and fiscal and policy analyst who works for the Santa Barbara County Executive Office. Does anyone have any information?

So glad that he was found, so thankful for our amazing local SAR team and those that helped find him! Great work!

The prayers of many have been answered ✨ ....

...or w-a-s it the prayers that guided this lost soul back to safety? Hmmmm....

It wasn't prayers to an imaginary god. It was hard work by real people.

I’m glad this did not end in tragedy. He did all the right things but ended up vulnerable to a difficult situation. SAR is a great resource to our community! Even highly skilled and experienced people can end up in a life threatening situation. I’m glad he’s safe.

It is always wise to have an extra couple days worth of supplies in case you get lost like this hiker appears to have done. Getting lost is no joke!

Pretty sure he wasn't "lost". The trail along Manzana Creek is well defined, part of the route he was on, plus he was only a few miles from the parking lot at Nira.

Glad he made it out, darn, making it to Fish he was close to car... This is Dennis Gagnon's "Southern Wilderness Loop" and having done it several times, I know it's much loser to 49 miles than to the "40" we've been told. At 49, Welch aimed to make 16 miles per day in the heat?! Amazingly ambitious, and rough on the dog. On one such trek my friend and I did it in three days, but in December and it was very demanding, and I was much younger. A GPS would not have helped, he wasn't "lost" he ran out of steam and water.... I wonder if the upper Manzana was running at Fish Camp...unlikely, but possible...

The forecast temps are always lower than the actual temps in the SYV - add in even more heat along those remote trails, and there can easily be a 10-degree difference, at least in how it feels. At 95-105ish, that makes a huge difference. Very glad there was a positive outcome!

Davy Brown - I had the exact same thoughts. Being at Fish Camp, he almost made it all the way out on his own. If Upper Manzana didn't have water, at least he had the shade of the trees there.

now that we can joke about it...what would you rather do, 2 extra days in the LPNF or work for the county? I wonder if he has to take the time w/o pay or will he just use "comp" or sick time??

4:07 - they credit his survival to his positive attitude. I credit my sarcastic humor (after he was reported safe) with helping me feel good about paying the tax bill for his rescue resulting from his poor judgement.

4:07 - they credit his survival to his positive attitude. I credit my sarcastic humor (after he was reported safe) with helping me feel good about paying the tax bill for his rescue resulting from his poor judgement.

My sentiments exactly re: the heat. There was ample warning, telling everyone a heat wave was hitting our area, too.

As a former county employee, rest assured... he will be paid one way or another using county funds. Guaranteed.

It was not 4:07 that said he was lost unless there were 2 comments at the same time. Regardless he was flown by the Sheriffs' copter to Cottage due to heat exhaustion and dehydration so he was not well enough equipped because everyone...especially an experienced hiker knew of the impending heat in the back country. So you're saying was fine but since the copter ride was free as opposed to Calstar where one needs insurance he opted for that. Full disclosure....I never heard the copter land as I was was indoors at lunch. Cites: Keyt stated he was air lifted out and taken to the hospital. Noozhawk stated he was flown by a sheriffs' copter to Cottage Hospital. I can not be held responsible for errors made by our local government spokespersons or other media sources.

Heat exhaustion can be fatal.

Able and experienced? He ran out of water. Thank goodness he and dog are okay. According to Noozhawk: "Wesley Welch, 46, of Santa Barbara was suffering from heat exhaustion and dehydration; dog is OK"

Get real 04:07, he was not lost. No joke from me. He is an able and experienced hiker. He was equipped and supplied for several days in the woods. He was with his dog. He was slower than he had planned; maybe hotter than he foresaw. He stayed on course. He was late. Don't insult him by presuming he got lost, or encountered some disaster, with no evidence beyond a missed schedule.

OOPS. What's to joke about? He had his family members worried sick. There were people out searching and searching for him. ATVs, a helicopter. People camped overnight, ready to search even more. He was late? That's some "plan" of his, making everyone think he'd met with some misfortune.

He was late, never lost. People been walking their dogs in the woods for 40,000+ years; it's not particularly dangerous. Glad his family and friends were concerned.

KEYT indicates that he has been rescued, both he and his dog were found alive. What a miracle!!! So glad there was a happy ending.

But what about the dog? Let's hear some good news on that score, too.

This brings to mind that fireman lost because he left his buddy at the camp at night, to look for his wandering dog. The dog was soon found. The fireman was also located, but too late. Really hoping to hear this lost hiker and dog are already found safe.

They were both found alive! What a miracle!

Missing hiker has been located per KEYT

That's heartening to hear about the camp registers.

Hoping for a happy ending for this story.

I don't understand why anyone who does backpacking in the wilderness and alone on top of it would not carry with them a GPS personal locater beacon. I hope they're able to locate him soon and he is ok.

Unfortunate that this heartbreaking situation upsets you.

Not understanding doesn't make it wrong. He made plenty of good decisions. Facebook posts indicate he signed in at the camp registers he passed, so they have been able to narrow down the search area significantly.

Hope he's found OK soon. Odds of a good outcome are increased by his leaving a planned route and return time.

+1
hopefully he had the right supplies in his pack

Should always carry a small mirror, just in case.

Oh heavens, I hope this man is found uninjured.

The full resolution image is

According to the CHP this

So your attorneys Ha,ha,ha.

yawn, do you want me to walk

The BMW Hit the Dodge...

Evacuation on Orange Ave Due to Gas Leak