May Tree of the Month: Southern Live Oak

Considering its home territory, it is hard to believe that the Southern Live Oak would survive in Santa Barbara.  Surprisingly, it not only survives, but seems to thrive here - even through our severe droughts.

This lovely oak is native to the coastal plains of southern and southeastern North America - ranging from Mexico to Virginia - where the climate is often hot and humid - quite different from our Mediterranean climate.  As a tree symbolic of the Deep South, it is often pictured lining either side of wide roads leading to old cotton and tobacco plantations, where its magnificent limbs create an over-arching allée draped in Spanish moss.

The Southern Live Oak is a medium to large, long-lived (over 400 years!), broadleaf evergreen tree that, in our area, rises to 30 to 40 feet with a spread of 40 to 60 feet - considerably smaller than the massive trees seen in the southeastern U.S.  Time will tell how large it might grow and how long it will live in our area, since it was only first planted as a street tree in Santa Barbara in the 1940’s.

It grows at about the same rate and has a similar overall shape as our native Coast Live Oak.  Consequently, from a distance, one can easily be confused with the other.  Upon closer inspection, the foliage of these two species differs significantly, making their separate identification easy. 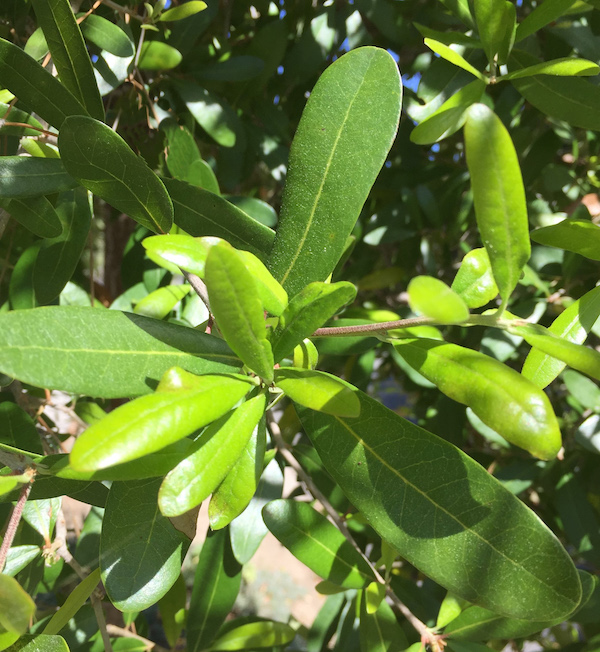 The Southern Live Oak’s dark-green leaves are ¾ to 1¾  inches wide and 2 to 4½ inches long, are obovate in shape, and have smooth edges.  They are rather leathery, are glossy on the upper side, and are covered with minute gray hairs on the undersides.  These leaf characteristics contribute to the tree’s ability to survive our dry periods.  While considered “evergreen”, it does drop its old leaves at the same time in the spring that new light-green leaves emerge.  By comparison, the Coast Live Oak’s leaves are also leathery and have the same coloration, but they are oval in shape and have sharp spines on the edges.

The Southern Live Oak blooms from March through April.  It is “monoecious”, which means that both male and female flowers occur on each tree.  The male flowers develop as yellowish-green catkins, 2 to 4 inches long, dangling from the ends of small stems.  Nondescript female flowers, after pollination, bear acorns, which are oblong and ½ to 1 inch long with cup-like caps.  The thick bark forms in longitudinal furrows and changes, with age, from brown to dark gray.

It tolerates a wide range of soil types, but does best in well-drained, sandy, loam soil.  It grows best in full sun, but tolerates partial shade.  Once established, it is quite drought- tolerant, though it prefers additional irrigation during the dry season. 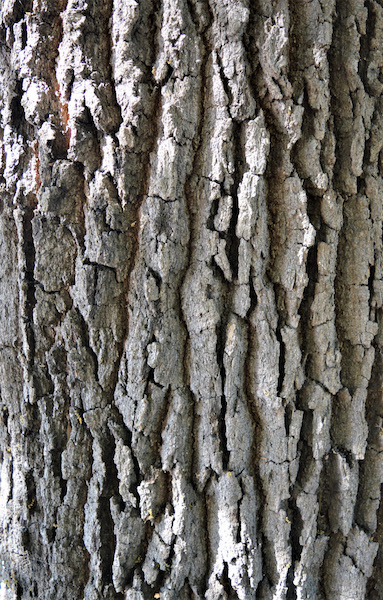 Remarkably, Southern Live Oak seems to have fewer pest problems than Coastal Live Oak.  But, like our native oak, it can still have its foliage stripped by oak moths - and will be subject to oak root fungus (Armillaria mellea), if soil conditions are too wet and drainage is poor.

Due to its general resistance to pests, its slow growth rate, and its sturdy structure, it is considered a highly desirable and low-maintenance tree for landscaping.  Its extensive root system, dense wood, and structural strength make it resistant to damage in winds up to hurricane force!

For wildlife, this tree provides excellent nesting sites for birds and generously produces copious amounts of acorns to feed all manner of creatures.

The Southern Live Oak has had many uses over the history of our country.  Native Americans used all parts of the tree; acorns for cooking oil and acorn meal; bark and leaves for traditional medicine; and, starchy seedling tubers for food.  For early European settlers, its strong wood was the primary lumber used in building ships, including our Navy’s most famous wooden ship, the USS Constitution, which was built in Boston in 1797, is still a commissioned vessel afloat, and earned the nickname “Old Ironsides”, because enemy cannon fire couldn’t penetrate her oak hull.

The botanical name for the Southern Live Oak is Quercus virginiana. The genus name, Quercus, is the Latin word for oak; the specific epithet, virginiana, refers to the State of Virginia, where it is a native tree.

Because of its many outstanding attributes and its beauty year-round, the Southern Live Oak makes an excellent street tree in Santa Barbara - as well as a lovely shade tree for our parks, residential yards, and commercial landscapes.

And abortions are not banned.

Toot - An issue being

They all lied. They tell the

Doulie, stop being such an

Right. If "everyone has known

Terrible map and your pop up

Chico, I love that argument.