Last winter’s late rains and warmer-than-usual temperatures have resulted in the most magnificent display of Jacaranda seen in Santa Barbara for many years - and the fabulous display of vivid, lavender-blue, blooms has occurred much earlier this spring.

Some trees display blooms all across their canopies but have no leaves at all, which makes a spectacular show.  Others bear both flowers and light-green, lacy, foliage - a combination that is delightful, whether seen from up close or from afar.

Because it seems to be in exquisite bloom everywhere you look, it is not surprising that Jacaranda is one of the two “Official City Trees” of Santa Barbara (the other is the native Coast Live Oak).

Jacaranda has been widely planted in Santa Barbara since its introduction here in the late 1800’s and - because of its remarkable beauty - more have been planted as street trees in the City than any other tree species.

Jacaranda is so well adapted to Santa Barbara that one might think it is native to California, but it was imported from South America (Argentina and Bolivia).  People have been so delighted by this lovely tree that it has been planted in practically every city in the world which has a Mediterranean climate, like ours, or in any other area that is almost frost-free.

The Jacaranda is in the Bignoniaceae, or “Trumpet Flower”, plant family. Its botanical name is Jacaranda mimosifolia.  The genus name, Jacaranda, comes from the language of the indigenous people of its native region, and translates as “fragrant”.  The species name, mimosifolia, means it has leaves look like those of the Mimosa tree (Albizia julibrissin).  It is sometimes commonly known as the “Blue Trumpet Tree” or “Blue Jacaranda”, but most in Santa Barbara just call it “Jacaranda”. 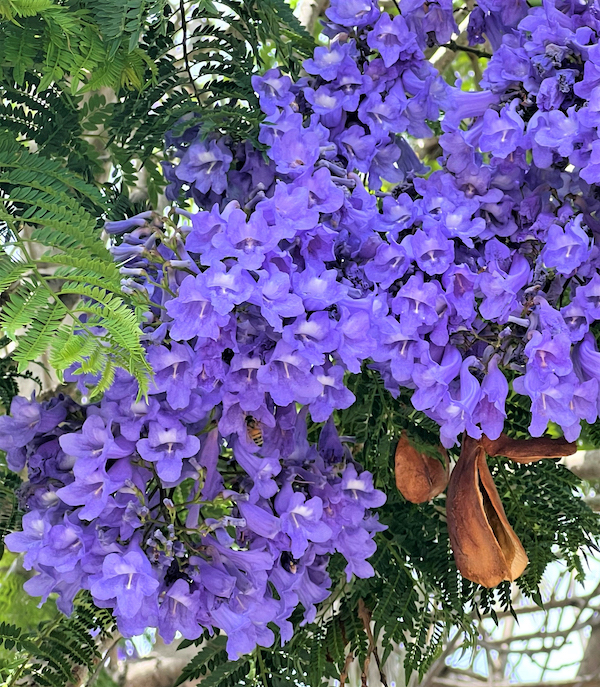 Jacaranda mimosifolia cross pollinates with a related species, Jacaranda acutifolia, and many trees in Santa Barbara appear to be such hybrids, as they have several of the characteristics of this latter species, including a deeper blue bloom color.  There is also a white-flowering cultivar, Jacaranda mimosifolia ‘Alba’, that is available in the nursery trade;  unfortunately, it is much less vigorous than the true form, perhaps due to the manual grafting necessary to ensure that only white flowers appear.

Jacaranda is a semi-evergreen deciduous tree that carries a rounded crown of dense foliage.  In our area, its mature height can be 30 to 45 feet tall with a spread of over 25 feet but, in ideal conditions, it can grow larger;  however, it can be easily maintained as a medium-sized tree.  Tidy in growth habit, it requires little in the way of pruning, other than removing any dead branches and the occasional vigorous sprout.  It can be trained as a low-branched, multiple-trunked, or single-trunked tree.

The Jacaranda blooms over a long period (one to two months, usually May to June), which adds to its appeal. Its lavender-blue flowers occur in thick clusters, or panicles, at the ends of branches.  Blooms are 1-1/2 inches long and trumpet shaped.  A tree grown from seed can take as long as 5 to 7 years after planting out before its first bloom occurs -  and so requires patience – which will be well rewarded.  Spent petals fall in great profusion beneath each tree, resulting in an amazing lavender-blue carpet; some folks see this as a lovely bonus, others as a mess!

After pollination, the flowers are followed by flat, round, woody, wavy-edged, seed capsules (up to 2 inches across) that dangle like castanets from the branches. The pods start green in color and turn to brown when mature, producing flat-winged seeds.  Trees are easily propagated from seed. The pods are frequently used in dried flower arrangements and in floral decorations. 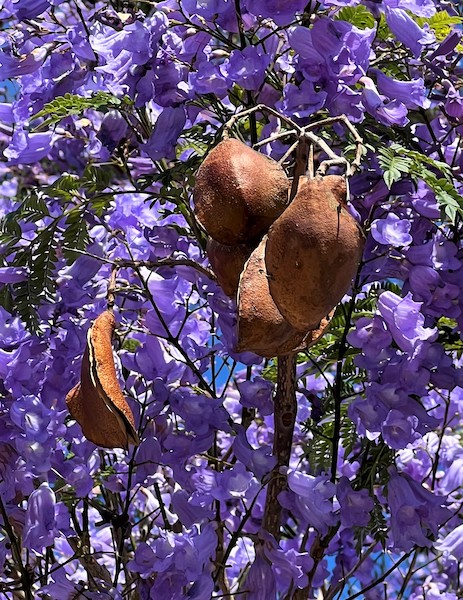 The Jacaranda’s other outstanding ornamental feature is its delicate fern-like foliage.  Its bright green leaves are up to 20 inches in length.  They are bipinnately compound, meaning twice-divided.  Each mature leaf can have over 1,000 small (¼ inch long) leaflets!

Its light gray to beige bark is smooth when young, becoming checked in small rectangular flakes with age.  The light bark color makes a striking contrast with the colorful flowers and with the lush green foliage.

Jacaranda grows best in full sun and in a well-drained loam soil, though it can tolerate poor soils.  Once established, it is very drought-tolerant and is cold-hardy to 20 degrees without serious damage.  It has few insect or disease problems  - but can be plagued with aphids, which can delay and reduce flowering, especially in years with unusually heavy fog.

Jacaranda is admirably adapted for use as a street tree or park tree, for commercial landscapes, and for most home gardens.  It is definitely a signature tree in Santa Barbara’s urban forest.  It will certainly continue to be planted here, ensuring its place in our community for future generations to enjoy.

Show Comments
May Tree of the Month: Jacaranda

Beautiful tree which the city has devastated in the past few months. 70-80 year old specimens were cut down at Mission and Micheltorena to advance the unneeded bicycle pathway in the West Side. The stumps are attempting to grow out but this week it appears they will also be ground out. So sad and for such a worthless purpose. The newly constructed pathways will cause bicyclists and pedestrians to be in conflict. The Micheltorena area is especially absurd as a large number of locals walk to the shopping area at San Andres, pushing trams and carrying groceries. This is a sad day for the community and a bad mark on the bicycle lobby's agenda.

When the City first posted their intent to kill the Mission Street jacarandas I posted a photo here, asking that people say no. I thought it worked, because it was a year before they were cut down. Now, yes, the stumps are doing their valiant best to make a comeback, sprouting as they lie a sad testament to some urban planner's obsession with bicycle lanes. Widening the street there will not improve the traffic flow, any more than that useless waste of a cross-town no-parking thoroughfare which I never see bikes on. The mismanagement of our built environment is a microcosm of the nation as a whole. Trees are a big part of what makes this city so beautiful. Everything possible should be done to nurture them, softening the urban landscape.

Lucky--Oscar Gutierrez is the council member for this neighborhood but his expressed preference is to push these bike lanes. These lanes dangerously and crudely sacrifice the safety of the community using sidewalks for the convenience of a very few bicycle enthusiasts. He needs to be reminded of this bad choice as he seeks political success in the future.

He's an e-bike enthusiast so this bike lane will be for his benefit. (I am an ebike enthusiast, also, but don't think that my pleasures should dominate over others'.)

I agree! These bike lanes are HORRIBLE. We need more parking, NOT more bike lanes. And I'm a bike enthusiast. WHY would they cut down these beautiful trees for such a terrible reason?

Jacarandas are beautiful and I like them a lot, but I would argue that they make terrible street trees. Their roots really do a number on sidewalks and curbs.

And yards. Our yard was filled with shallow but relatively large roots from a jacaranda 20 feet away.

We need more parking - not bike lines. How far behind the times are you. Wait till gas is 9 bucks a gallon and you'll all be complaining there isn't enough bike parking.

Yes, the jacarandas look nice for a couple of weeks a year. But have you ever tracked those sticky flowers into your home? Your carpets will be ruined.

The rest of the year they don't look like anything special.

Wow. Hundreds of acres of our city paved over for cars. A few measly bike lanes and all of a sudden THEY are responsible for massive environmental destruction? Just wow.

The City of Goleta reports Measure A Funding will be used for construction projects aimed at improving bicycle and pedestrian access and safety.

A local development company announced the recent acquisition of The Waterman, a 31-room hotel, located in the Funk Zone.

The California Department of Fish and Wildlife is seeking data and comments on a proposal to list the Temblor legless lizard under the California Endangered Species Act.

Are walking stick bugs common in this area?

C.B. shares a cartoon about e-bikes and today's youth.

The Goleta Police Department will hold a DUI checkpoint on Friday, August 19, from 6:00 p.m. to 3:00 a.m. at an undisclosed location within the City of Goleta.

The Santa Barbara Zoo has received its official license from the State of California as the very first licensed outdoor preschool in the state, providing one of the most unique educational experiences available.