May Tree of the Month: Camphor Tree

This time of year, if you see a tree from a distance that looks like billowing clouds of lime-green cotton candy, it is most likely a Camphor Tree.  The clouds are the result of the great profusion of small yellowish- to greenish-white flowers produced on the tree from April through May.

The flowers are quite small, less than ¼ inch in diameter, but their massed effect is delightful.  Flowers occur on inflorescences (flower-bearing stems), 3 to 4 inches in length, which end in a large group of up to 50 flowers.  Each flower is slightly fragrant, has both male and female parts, is self-fertile, and is usually pollinated by small flies.

The resulting fruit is a small (up to ½ inch across), round, drupe (fruit with a single seed inside).  When ripe at the end of summer, the fruit flesh is a very dark blue to black and is quite attractive to birds. They eagerly eat it - and thereby disperse the seeds. 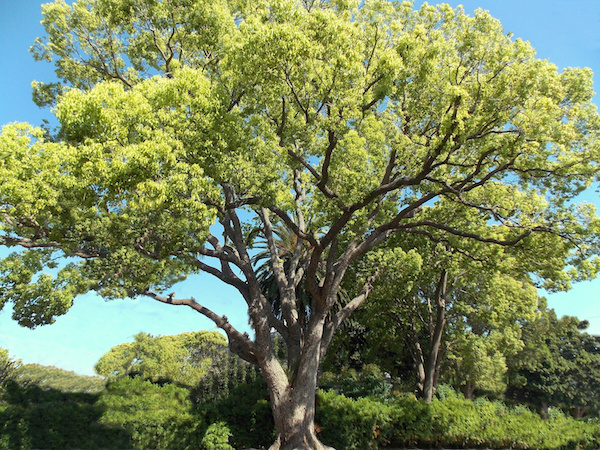 The leaves of the Camphor Tree are ovate in shape, are arranged alternately on the twigs, and are attached by a slender petiole (leaf stem), ½ to 1 inch long.  Newly emerging leaves can be bronze to pink in color, later turning to a lime-green.  Mature leaves have three distinct yellow veins, are 3 to 4 inches in length, 1 to 2 inches in width, and leathery in texture.  When crushed, they exude, not surprisingly, a strong smell of camphor.  The camphor smell comes from the volatile compounds which are found in all parts of the tree. 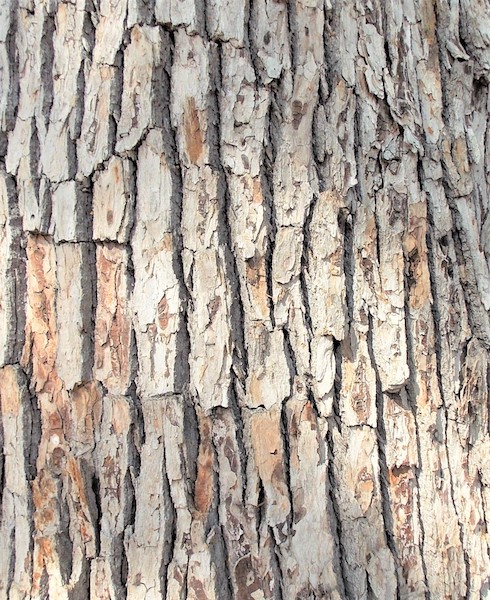 The leaves, wood, and distillations of them, have been used by humans for a very long time (Marco Polo observed their uses by the Chinese in the 13th century) - as medicine, as a culinary spice, as incense, as an insect repellent, and as an ingredient in smokeless gun powder, lacquer, and celluloid.  The wood is prized for use in cabinetry, because of its resistance to insects and its hardness.  In Asia, the tree is also planted for religious purposes.

A distinguishing characteristic of the Camphor Tree is its beautiful bark.  On young trunks, it is smooth and green.  As the tree ages, the trunks and branches become deeply furrowed in interlacing vertical strips with flat-topped ridges, gray on top with alternating creamy-white and light-brown layers below, appearing overall much lighter than the bark on most trees.  As the trunk fully matures, it can develop a huge burl base and large surface roots.

Camphor Tree is native to tropical climates in China, Taiwan, and Japan, where it can live to over 1,000 years, reach 80-100 feet tall, and develop a trunk diameter of up to 20 feet.  It grows well in our Mediterranean climate, but here is a relatively slowly growing tree and reaches a height and spread of only 30-50 feet.  It can tolerate the wide variety of our local soils, but always needs good drainage.  It is sensitive to frost when young, but when mature can sustain temperatures down to 20 degrees without damage.  It is surprisingly drought-tolerant and can survive with our normal rainfall, though in periods of prolonged drought does require additional irrigation in order to avoid dieback and loss of leaves.

The genus name, Cinnamomum, comes from the Greek, meaning ”spice”; it is the same genus as the Cinnamon tree whose bark is the true source of cinnamon spice.  The specific epithet, camphora, is from the Latin, meaning “camphor”.

This stately tree is an excellent, low-maintenance, shade tree that attracts birds and wildlife.  It is also well suited as a screening and windbreak tree.  It should be given considerable space when planted, to accommodate its eventual size and root structure.

A sobriety check point. But

Good luck with that. Oil

Why not rename it to BOSAMS?

I'm surprised that there was

We were all high, we thought

Who cares if he has an