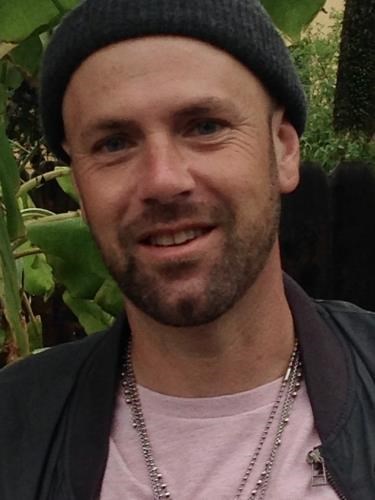 With broken hearts, we announce Mathew Howell died suddenly in Santa Barbara on August 28, 2021. He was born in San Francisco on May 11, 1976 to Heidi and Jamie Howell. He is survived by his parents; his sisters Jesse Star, Lily Kate (Moshe Cohen), and Jenny Blaze (Andrew Hine); his niece Kaya; and his nephews, Nolan and Otis. Other survivors include his Uncle Billy (Jill); Aunts Karen, Hilary (John), Deirdre, Debby, Katie (Bruce), and Tessa; numerous cousins; and a multitude of friends. He attended Rooftop, Live Oak, and the San Francisco School. After graduating from Washington High, Mat studied Film at City College of San Francisco prior to starting a career in real estate. Mat had a successful practice with several companies including BJ Droubi, Foghorn, Paragon, and Hill & Co.

Mat moved to Santa Barbara in 2010 to follow in the footsteps of his famous grandfather, the artist William Dole. He produced many unusual paintings combining the styles of graffiti and pop art. Mat is remembered for his unbelievable acting skills, finely honed style, encyclopedic knowledge of both music and film, and outrageous dance moves. He will be missed for his humor, kindness, gentleness, and his unparalleled ability to stick nicknames on friends, siblings, and pets. There will be a memorial celebration of Mat's life outdoors in October. Please reply to Mathewhowellmemorial@gmail.com for further information.

The lives of sensitive, creative people sometimes hang by a thread. Wordworth was right: "The world is too much with us, late and soon.... " The case of this person's death may not be possible to know, but his worth was obvious, though maybe not to him. Many of us have no idea the difference we make in other people's lives.

SBGAL74 - I totally agree with you. And, giving more info might help someone else from doing the same thing that might end their life

So very sad after reading the recent missing person post with pleas from his loved ones for information. I wish these obituaries would give more information regarding the circumstances of death. In cases of accidental drug overdose or intentional suicide people often just say…”died suddenly”. However, both of these issues are devastating and happen far too often. I believe there needs to be more light shone on these instances and the mental health struggles that lead people to suicide. My heart breaks for anyone who’s suffered losing a loved one to suicide and/or drug addiction.

So very sorry to hear. May his family and loved ones find peace.

Sad to read this, after having seen on this site he had been missing recently. My condolences to his family.