by an edhat reader,

Mary Zacharias Frangos was born in Ikaria, Greece to Angelis and Eugenia Karnavas Kozamanis on November 6, 1924, the youngest of six children. She met her husband Zacharias in Ikaria, Greece, and they married in 1952, after which they moved to the United States and he brought her to their forever home in Santa Barbara several months after arriving to the U.S. 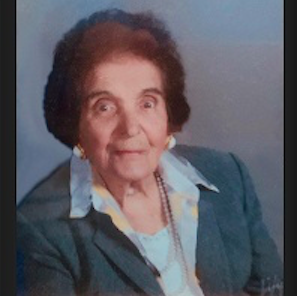 Mary, with her husband Zacharias, worked in their Santa Barbara-based family business "Frangos Upholstery and Drapery" (founded in 1946), and later "The Danish Village Bakery". Mary was a natural business-person and kept the family business growing throughout the decades, as well as being known for her generous hospitality - inviting students and 'those in need' from nearby University of California, Santa Barbara for Easter, Thanksgiving, and Christmas celebrations.

Ms. Frangos was active in the Saint Barbara Greek Orthodox Church, the Pan-Icarian Brotherhood, the Daughters of Penelope, and the Milpas Merchants Association.

She was preceded in death by her husband Zacharias Frangos, her parents, and siblings from oldest to youngest - Despina, Stavros, Evangels, Magdalini, and Constantino. Mary left us peacefully on June 5, 2019 after some hospitalization and the expected complications of 94 years of life. She is survived by her beloved and only son, Constantino "Dino" Frangos.

In lieu of flowers, contributions may be made to the Pan Icarian Brotherhood Scholarship, mailed to the Pan-Icarian Foundation, Post Office Box 79037, Pittsburgh, PA 15216-0037, or sent to Saint Barbara Greek Orthodox Church. Arrangements are under the direction of Chapman Funeral Homes - Terry & Mary Harmon, Funeral Directors for more information: (855) 628-0447.

Vaccinated people are getting

For this one, there is a

I looked up the Rose Garden