The Monterey cypress is recognized, world-wide, as the iconic tree of the California Coast.

Once one of the rarest trees in the world, naturally found in only two small groves within a few hundred yards of the Pacific Ocean on the Monterey Peninsula and at Point Lobos, it is now planted throughout the world in favorable locations.

Monterey cypress seems to thrive in foggy coastal areas, where ocean winds and salty sea spray make it extremely difficult for other species of trees to even survive.  In fact, wind abuse sculpts it into the unique and picturesque shape for which it is famous - a strongly contorted growth habit reminiscent of trees found in alpine timberlines. 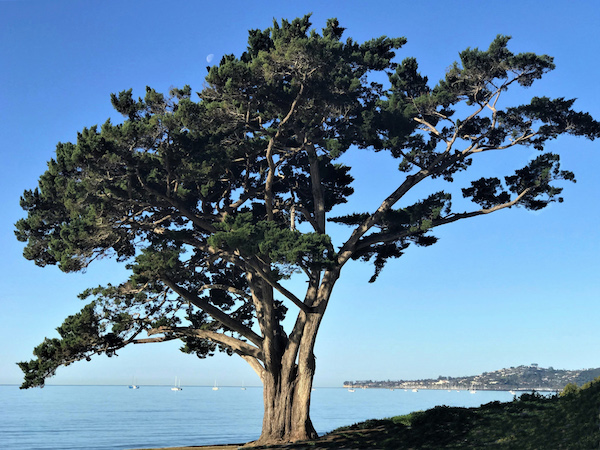 When young, it is fast growing and has a narrow, pyramidal shape.  With age and ideal growing conditions, it frequently becomes a broadly-spreading, flat-topped tree - up to 90 feet tall, with a canopy spread of 70 feet and a trunk diameter over 6 feet.  Being quite hardy, it can live to 300 years old in ideal conditions. 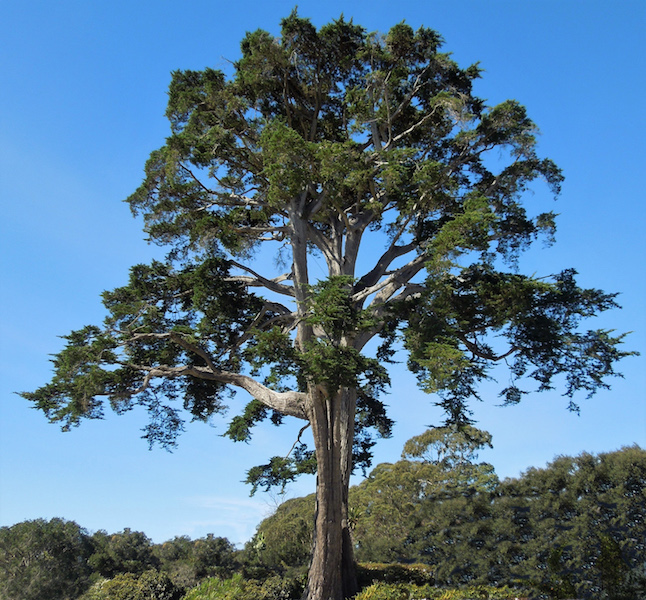 Monterey cypress is an evergreen coniferous tree, bearing male and female cones on the same tree.  The female seed cones are shiny, round, and about 1 inch in diameter, covered with 8 to 12 light-brown scales.  The much smaller yellow male cones, only ¼ inch long, produce copious amounts of pollen in the late winter and early spring.

On young branches, scale-like foliage appears in bright-green sprays - with maturity these become dense and dark green.  When crushed in the hand, they emit a lovely fragrance.  Several cultivars with yellow-green new foliage have been selected by nurseries for propagation and sale, with the most prominent being ‘Lutea’ and ‘Goldcrest’.

Monterey cypress is remarkably tolerant of poor soils.  It does best in the high humidity on the coast - but can grow further inland, if additional water or irrigation is available.  However, when planted further from the coast, it is susceptible to a fungal disease, “cypress canker”.

Recently, DNA analysis has discovered that Monterey cypress is not closely related to the Old World cypress species.  Consequently, its genus name has been changed from Cupressus to Hesperocyparis, meaning “western or new cypress”.  The specific epithet, macrocarpa, means “large fruit” and refers to the size of its seed cones.

While a mature Monterey cypress may be too big for smaller residential lots, it is an excellent choice as a landscape specimen for larger private residences or for public properties, such as parks and golf courses.  When planted in long rows, it is an effective windbreak or hedge.

Monterey cypress has been widely planted in Santa Barbara for over 100 years.  Trees of various ages can be seen all around town:  along east Cabrillo Boulevard and Channel Drive; in Shoreline Park and La Mesa Park; and, throughout Montecito and Hope Ranch.  Many mature specimens can be seen in the Santa Barbara Cemetery.

Thanks Dave. Is there a group that looks after the trees in County Parks? Do they have a certified arborist on staff?

Wonderful to learn about these beautiful trees. Thank you.

No, you're missing the new

And the info out of Australia

He said it was the Sheriffs

Sheesh of all the high risk

Why is everyone blaming our

Thank you your support for

Most of the people that want

Quote of the year, as Do