The Golden Trumpet Tree steals the show in any landscape, because it has the most intensely yellow - and stunning - display of flowers.

Golden-yellow, trumpet-shaped, flowers (3- to 4-inches long) emerge in March and April, usually forming dense showy clusters at the ends of branches.  Blooms are in their full glory when the trees are leafless, which greatly accentuates their colorful effect.  Flower buds are distinctive because they are covered with rust-colored pubescence (short fuzzy hairs).  The open flowers are full of nectar and quite attractive to honeybees.  On some trees, flowering will continue throughout the summer months.

The seed pods that develop from pollinated flowers are cylindrical, narrow (¼- to ¾-inch wide), long (up to 8-inches in length), and are covered with brown pubescence, almost like velvet.  Mature opened pods can dangle in the tree until the new leaves emerge. 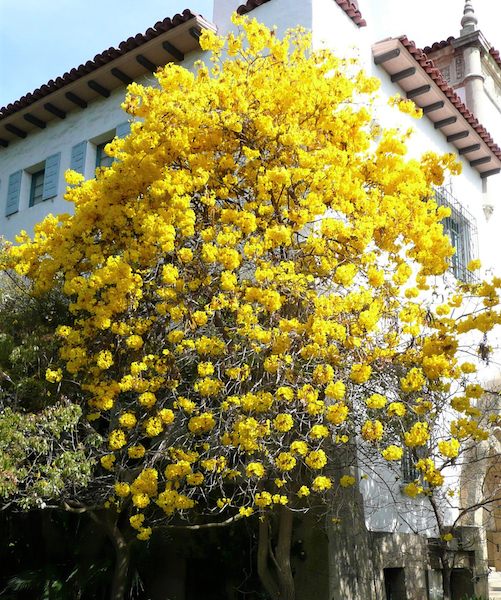 The leaves are palmately compound (like the spokes of an umbrella), and each leaf has 5 leaflets (1-to 4-inches long and ½- to 2-inches wide).  The top sides of the leaves are shiny and dark- to olive-green, while the undersides are covered with rust-colored pubescence.  Attractive light-gray bark is smooth on young trees - but will turn into rough furrows, with an interlacing lattice pattern, on mature trees.

This is a lovely small- to medium-sized deciduous tree that grows slowly to a height of 15 to 30 feet with an equal spread.  The rounded crown can be somewhat irregular and gangly, especially on young trees.  It does benefit from light pruning to improve overall shape and structure.

The Golden Trumpet Tree is native to the coastal forests of Southern Brazil and northern Argentina, where it is known as “Ipe Amarelo”.  The Ipe wood from all trees in its genus, Handroanthus, is extremely valuable, because it is extremely dense and resistance to rot.  For these reasons, it is exported around the world for use in decking, construction, and furniture.

Its botanical name is Handroanthus chrysotrichus. The genus name, Handroanthus, honors the 20th century Brazilian botanist, Oswaldo Handro - combining his last name with the Latin word for flower, “anthos”.  The specific epithet is derived from the Greek words “chrysos” (meaning “gold”) and “thrix” (meaning “hair”) and refers to the pubescence on the calyxes (the outer protective covering at the base of each flower).  Its botanical name was previously Tabebuia chrysotricha, which was changed in 2007 after analysis of its DNA and those of closely related species. 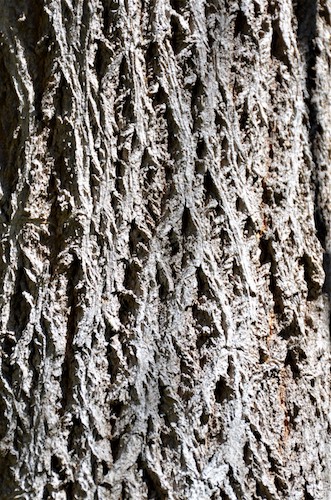 The Golden Trumpet Tree prefers hot areas with full sun that are protected from frost.  Since it is native to tropical areas, it is damaged by temperatures below 25 degrees.  It does best in sandy loam soil but can tolerate other soils, provided there is good drainage.  It is moderately drought-tolerant but will look much better with irrigation in the dry season.

It can easily be propagated by seed.  A fresh seed germinates in 1 to 2 weeks in regular potting soil.  After that, with consistent watering once or twice a week, it will develop into a young tree that, when 1- to 2-feet tall, can be planted out into a pot or in the ground.

The Golden Trumpet Tree is used primarily as a garden accent tree - but can also be used as lovely park tree or street tree.  Due to its slow growth and small stature at maturity, it makes an ideal tree for patio gardens or home lawns, where its vivid flowers can be appreciated in an intimate setting.  Surprisingly, it is still somewhat rare in Santa Barbara, though having been planted here since 1964.

The Golden Trumpet Tree can be seen standing in Alice Keck Park Memorial Garden and at the  County Courthouse - several young trees in front and a mature tree at the southwest corner.  It certainly stands out!

And I, too, have had recent

The vehicle is a dark blue

No body cameras? By design.

So you read all four articles