It's Day 2 of this year's March Edness! Can you guess the location of the photo? Enter your guess in the form below by 8:00 p.m. and be specific. (What's March Edness? Learn all about it here.) 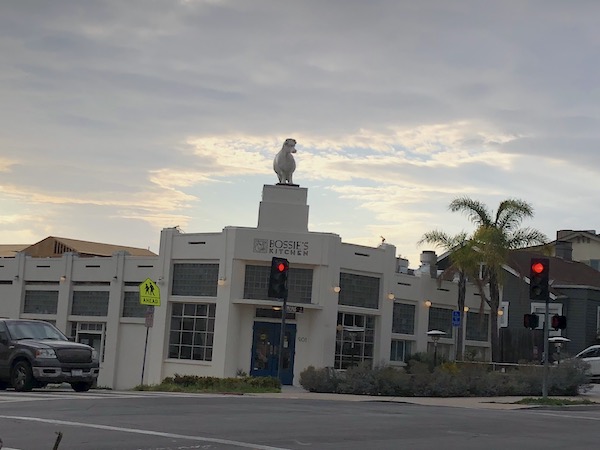 This building was designed in 1939 by Alexander C. D'Alfonso as "Streamline Moderne" with a canted front entrance and round awning, rounded engaged columns, and stepped piers rising to the central platform supporting the iconic cow statue.

The Live Oak Dairy commissioned the building for its new creamery. There were 10 dairies operating in and around the city at the time.  The Dairy purchased a plaster cow from Alfred Kuhn, a sculptor from Yucaipa, for $1000 and placed it on the roof over the entrance naming it "Old Bossy." 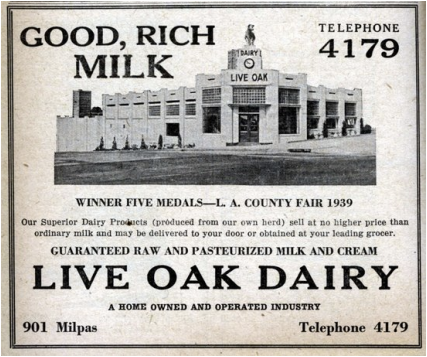 Old Bossy became an important fixture around town. During its dairy days, parents would bring their children to the soda foundation to see the cow. Throughout the generations, Santa Barbara High School Seniors have been known to paint and dress up Old Bossy as a prank.

In 1965 she was seen wearing a mask, sombrero, long wig and a flower trimmed poncho emblazoned with the High School team name, “Dons ’67.” In 1971, they tried to decapitate Old Bossy with a ripsaw. She was repaired and hoisted back up to the roof. Students also took the bell from the nearby Taco Bell and tied it to her neck.

Later the building became the home of McConnell’s Dairy and Ice Cream shop. Today, it's the home of Bossie's Kitchen where the owners incorporated the iconic cow into their logo. Two California chefs have been serving up a combination of sweet and savory items using the local farmer's market since January 2019.

I'm sorry but I was going

Once again, the blue-green

trump has stoked fear and

Nailed it re: KEYT. With the

Das, Steve & Supes to SB Grand Jury on Pot & Ethics Reform: No Way, No How, Not Now, Not Ever

Those guys, Das and Steve are

Has anyone gone missing? Or