The man caught on camera for shoving a Trump supporter by East Beach last weekend has turned himself in and was arrested by police.

Scott J. Manser, 32 years old, voluntarily came into the Santa Barbara Police Department (SBPD) at 10:30 a.m. Friday with his attorney to turn himself in. The SBPD report stated Manser is from Los Angeles, but he's been established in Santa Barbara for a while.

Manser previously co-owned the now-closed Champagne Room bar on W. Haley Street. While his Facebook page lists him as a co-owner of The Shop Kitchen on Milpas Street, the owners of the restaurant state he has not been affiliated with the business since 2014.

Manser was captured on video Halloween day for shoving a man involved in a Trump parade and grabbing his hat and an American flag. Police quickly responded to the scene and Manser fled towards the beach. SBPD then issued a statement with photos and videos of the incident asking for information. 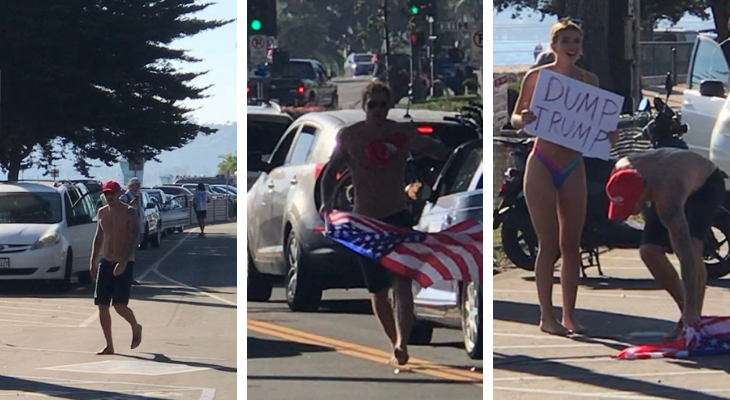 The SBPD investigation determined that Manser was also involved in three hit and run collisions in the area of North Milpas and East Anapamu Streets prior to the incident at East Beach.

Around 12:15 p.m. on October 31, Manser drove his silver Land Rover SUV over a curb and into the front of residential properties hitting objects before fleeing the area. His vehicle sustained major damage and was found abandoned in the area of East De La Guerra and North Milpas Street.

A few hours later, at about 3:20 p.m., several citizens called in about a suspect who was verbally harassing people on East Beach at 1300 E. Cabrillo Blvd. This was where Manser shoved a man after taking his hat and flag fore fleeing the area. 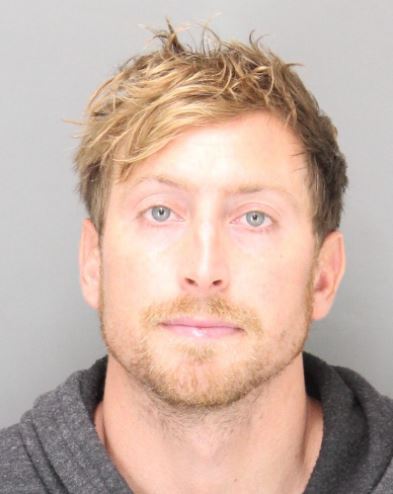 After an “assistance request” by SBPD was released to the public and media, numerous citizens called in to identify the assault suspect as Manser. He was also suspected to be involved in the triple hit and run that had occurred several hours before the battery. Santa Barbara Police Department Officers and Detectives investigated further and obtains warrants for his arrest before Manser turned himself in.

Manser was arrested and booked without incident at the Santa Barbara County Jail for three counts of Misdemeanor Hit & Run, one count Felony Theft from a Person, and one count Felony Battery. 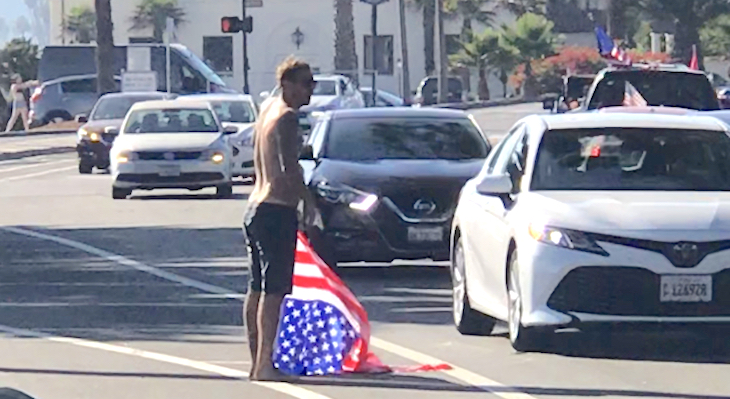 Young Punk shoving an older man Oh how Brave no wonder some of you tough guys were defending him he is just like some of you Brave souls who like being mean to older Folks...I hope he gets some time though I doubt it.

Aren’t he and his wife Co-owners of “The Shop” restaurant and kitchen on Milpas? No very neighborly or professional to hit & run , then leave your car on the intersection of your business

Yoooooo, thanks for participating in the fake news cycle of the day. I’m Dudley. And I actually do own the shop. I’m not him. Also my business partner Chris and his lovely wife Amy...are also not mr. Manser. Thanks for being part of the rumor mill and doing your part to disparage myself and my business . Go ahead and delete above since you are incorrect on all accounts. Thanks , have a marvelous day

Hey Dudley, Edhat even updated the article with the info from this dudes comment

He is not a co owner of the shop. I own it...soooo ya. The report is incorrect. I have emailed Ed hat about their mistake. Thanks all

The correction has been made above in the article stating Manser is not affiliated with The Shop Kitchen.
-edhat staff

He should remove co-owner of The Shop from his Facebook profile. It’s obviously causing inaccurate reporting and unnecessary stress to the actual owners.

PS props for taking the opportunity to draw attention to something positive. I plan to swing by a buy one the canteens this weekend. You guys are a great local business, supporting a very important cause.

What are the canteens and what is “the cause”? Thnx.

The Shop is selling canteens that benefit Boys & Girls Club School Lunch Program. There’s a comment about it somewhere in this thread

Canteens filled with ice tea 6.50 each I hope I'm correct I googled...

Glad they got him, totally unacceptable!

Sounds like an out of control addict on a rampage and not a political provocateur.

GENERALTREE - not everyone who gets wasted and does something stupid is an "addict."

But by telling the Judge he has a problem with substance abuse he could get the charges lowered by going to a 12-Step on a court card.

...whose partner in crime had a non-provoking non-political sign. I hope this guy learns a lesson that getting wasted all the time leads to where he is now. Booze...the great equalizer...

Sacjon - so he got wasted this one time and did something stupid? Where did you read that?

GENERALTREE - Yeah, totally possible and I didn't read that anywhere. Where did you read he is/was an addict?

Besides, I've seen plenty people get drunk/try a drug for the first time and do something absolutely stupid and bizarre like this. You don't have to be an "addict" to do something stupid under the influence.

Might be a good time to circle back to LOOSECANNONS position on the matter:

"It takes a lot of courage for one young man and his female companion to stand up to a caravan of these thugs. They have my respect."

Who crowned you 1st amendment arbiter?

Zero and Loose deserve to be called out for backing, loving and respecting this guy after assaulting someone on video. That’s not cool or right in any capacity.

So this is your job to follow other people on Edhat?

Duke, we thought about getting in our Priuses and Civics and having a parade of Biden supporters but don't want to waste fossil fuel and kill our planet. Plus in Boy Scouts I learned that you shouldn't damage a flag by flying it from your car, and you should take it down each night in a ceremony. But that's just how real patriots act.

really? so others are not entitled to their own opinion? How about i call YOU out for trying to control what others can say, feel, think? I stand by my statement and conviction. He shoved an obnoxious trumper. so what. the charges are petty and will be dropped, guaranteed. Anyway, yall continue to argue and bicker about sh*t that really doesn't matter to me or anyone. Continue the rumor mill and continue to ruin your own day by arguing with people on the internet lol <3

Duke, nope. Still has my respect. i've witnessed and watched so many trumpers treat other fellow Americans like pure crap and you ladies want to cry because one of them got shoved? ok got it

ZERO - so just because other Trump supporters are jerks and assault people, it was OK for a young strong man to provoke a different supporter and shove him to the ground without justifiable provocation? Do you think we're above the law or something?

This is what happens when you legalize alcohol..... :D

LOL. Yup. Alcohol has that effect on some idiots.

I'm glad he turned himself in. Not good PR for a business man to behave in such a way.

Epic - So glad they arrested this kook. Doesn't really matter if he decided to turn himself in, he still made the very poor choice to run and not face his actions like a man. Instead he probably consulted with mom and dad and only then decided to man up and turn himself in (with mom and dad's lawyer no less) at his side. Hope all the charges stick...It's also no surprise to learn he's coming from LA....Standard.

So is the penalty for "shoving" still execution by lethal feral ferret? Voters just shoved ALL Trumpers out of our democracy. Dude should be awarded a presiduncial medal.

PAXATEUR - as much as I love seeing Trump getting the boot, we still have laws. This guy committed a battery, he should be held accountable politics aside. We are no longer America if we start allowing violence to go unchecked just because of the politics of the victim.

We haven't been "America" for the past 4 years. Shoving is battery. Got it. Release the ferret!

PAX - you're right, our country has been torn, but we still have laws. Yes, shoving is battery and so is reaching into a car and taking off the driver's hat (civil battery at least). We can't allow this type of physical aggression to be allowed on political grounds. A society has laws, he broke them.

Teur, are you just trolling? Winning 50.1% of the vote is not a repudiation of anyone except Trump. What is the point of your post?

Very low end of the "assault" chain. Kids shoved other kids everyday on schoolgrounds before Covid, so should they be arrested, too? I never said he shouldn't have been arrested, but the vitriol spewed by some seemed a tad overwrought. As I stated in my initial comic comment: "Release the ferrets!"

I'll spell real slow for you, Pit: The outrage fitteth not the crime. And I'm happy to break it to you, but yes, the vote said, percentages be damned, that this fascist mindset will no longer be allowed to decay and deteriorate the body politic of our Democracy. Is that troll enough for you? Good. Have a day and celebrate the End of an Error!

I'll spill it real slow for you Felony Battery..i Voted Blue but you cannot go around shoving people just because you think they deserve it. Guy in vehicle did nothing for this guy to put his hands on him, he just wanted his fucking hat back.

Which hit and run was he apart of ?

The guy who shoved the Trump Supporter after stealing his hat on Cabrillo he was very annoying. The call went out on him long before this incident so the police were already responding.

I did not read the whole article but just read another version three Hit and runs in the area of De La Guerra and Milpas he left his vehicle behind. Then felony theft and felony battery...

Thanks to the high rate of

No patients on scene

Report of people fleeing the

Fire has been knocked down

Thanks to vaccine refusal and