On Wednesday, January 1, 2020, at about 0911 hours, Santa Maria Police Officers were dispatched to a local church, located in the 400 block of E. Church, to a report of a person inside of the church setting fire to objects in front of an altar. At the time, church staff was preparing for a church service. When confronted by staff, the subject walked out of the building while incoherently uttering words.

Within a few minutes, one of the first arriving officers located a person matching the suspect’s description walking near the intersection of Miller and Cook Street. The officer attempted to detain the subject, who was later identified as 27 year old Cristobal Zarate, a Santa Maria resident. Zarate refused to stop and demanded the officer not touch him. As the officer walked toward Zarate in an effort to detain him, Zarate splashed the officer’s face and upper body with an unknown liquid irritant. Zarate physically resisted the officer's efforts to arrest him. A Good Samaritan came to the officer’s assist and helped take Zarate into custody. Zarate nor the Good Samaritan were injured during the struggle.

The officer sustained minor injury that was caused by exposure to the unknown liquid thrown on him by Zarate. The officer was transported to the Marian Medical Center, where he was treated for minor injuries and released. Zarate was transported to the Santa Barbara County Jail and booked on arson, felony assault on a peace officer, felony assault with a caustic chemical, disturbing a religious meeting, and vandalism charges. His bail was set at $50,000. 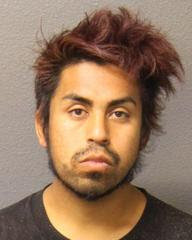 This appears to me a

I hope Ms. Abboud's point was

Yes, I misspoke terribly, as

His stepmother sued him

Is this Kent Lapp from

Care to translate into normal

I see your point to an extent