In the early morning of Jan. 9, 2018, seven homes were destroyed and two people died on Randall Road in Montecito as a raging torrent of mud and boulders jumped the banks of San Ysidro Creek.

It was one of the deadliest places to be in Montecito that day. A catastrophic debris flow, triggered by extreme rainfall on the burned mountainside, descended on the sleeping community below, damaging more than 200 homes and killing 23 people. Two of the victims lived just below Randall on East Valley Road and Glen Oaks Drive. 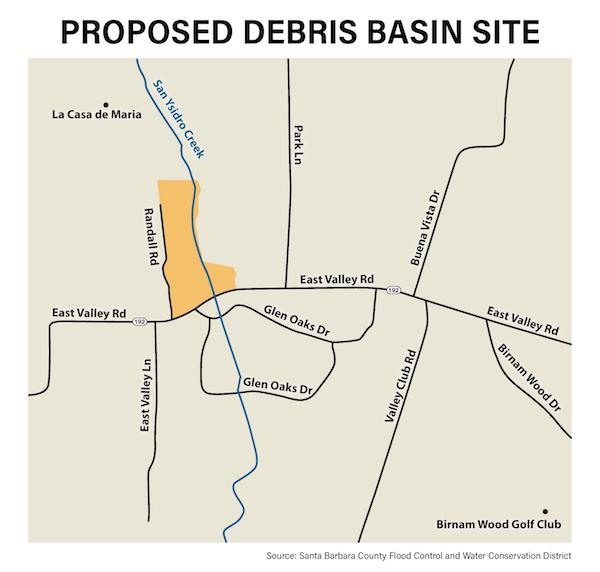 Now, the county is designing a debris basin on eight acres at the intersection of Randall and East Valley – effectively, an enormous dirt bowl to help trap the boulders and uprooted trees that can surge over the banks of San Ysidro Creek during the worst storms. It will be 10 times the size of the existing debris basin, which is located higher on the creek, near Park Lane.

“I’m really excited to be able to be a part of something this big,” Tom Fayram, deputy director of county Public Works, said after a county design workshop on Monday. “I don’t want to lose the momentum. You don’t see this very often, so you have to grab that and go forward and get it done. If I would have proposed this basin in 2017, you would have seen this room full of mad, screaming people.”

The new basin is on a fast track; environmental review is already underway. If state and federal permits can be obtained in time, construction will begin in the summer of 2021, with a finished basin by the fall of that year, county officials said.

In addition, they said, they are designing a new dam outlet for the existing basin on San Ysidro Creek so that instead of clogging the basin, fine sediment will flow downstream. On Jan. 9, 2018, the fast-flowing mud, rocks and trees overtopped this small basin by as much as 30 feet.

On Monday, county officials ticked off a list of 15 storm disasters that have battered Montecito with major debris flows or debris-laden floods since 1862. On San Ysidro Creek, a major gas line and several homes have been hit more than once.

A map by Partners in Community Renewal, a new nonprofit group in Montecito, was displayed on a big screen, highlighting the dramatic change in topography in the Randall/East Valley roads neighborhood, post-Jan. 9, 2018. In some locations, the piles of mud and rocks left behind by the debris flow were 15 feet high. 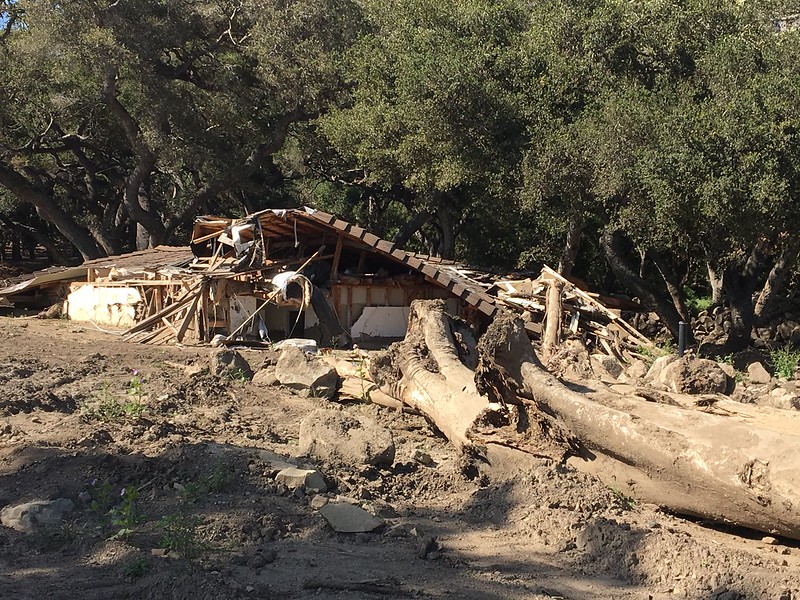 “To reach this point is huge,” Curtis Skene, the Partners co-founder and executive director, told the audience. After Skene lost his home on East Valley Lane, he approached Fayram with the concept of a debris basin on Randall and got the property owners – his neighbors – on board.

“We are going to work with the county, and we are going to see what else we can do on other creeks to mitigate the risks,” Skene said.

Below East Valley, about 95 homes along San Ysidro Creek were destroyed or damaged, and more than 200 other properties took on mud and water. According to a study by the U.S. Geological Survey, more debris was deposited along San Ysidro Creek during last year’s catastrophe than along Montecito, Oak, Romero or Buena Vista creeks.

“We don’t want another disaster to pass before we make some fundamental change to increase our resilience and our safety,” said county Supervisor Das Williams, who represents Montecito. “We are immensely committed to making a difference and not going back.”

The new basin on San Ysidro Creek is estimated to cost $20 million, a price tag that includes land acquisition. On Monday, county officials said they were optimistic that the Federal Emergency Management Agency would pick up 75 percent of the cost, leaving the county to cover 25 percent. In all, eight properties must be purchased: seven on Randall and one on East Valley. The county purchased the only home still standing on Randall for $4 million last May.

From the audience came a question: Would the new basin have captured all of the debris that surged over the banks of San Ysidro Creek on Jan. 9, 2018?

Not completely, Fayram replied, adding, “We still would have had a significant flow. But it certainly would have helped … All of our debris basins ‘worked’ in the debris flow.”

The new basin will be hidden from East Valley by a berm landscaped with shrubs and trees, county officials said.

“It’s going to look more like open space than a debris basin,” Fayram said. “There’s no dam, there’s no rock spillway; there’s going to be a trail going through there.” 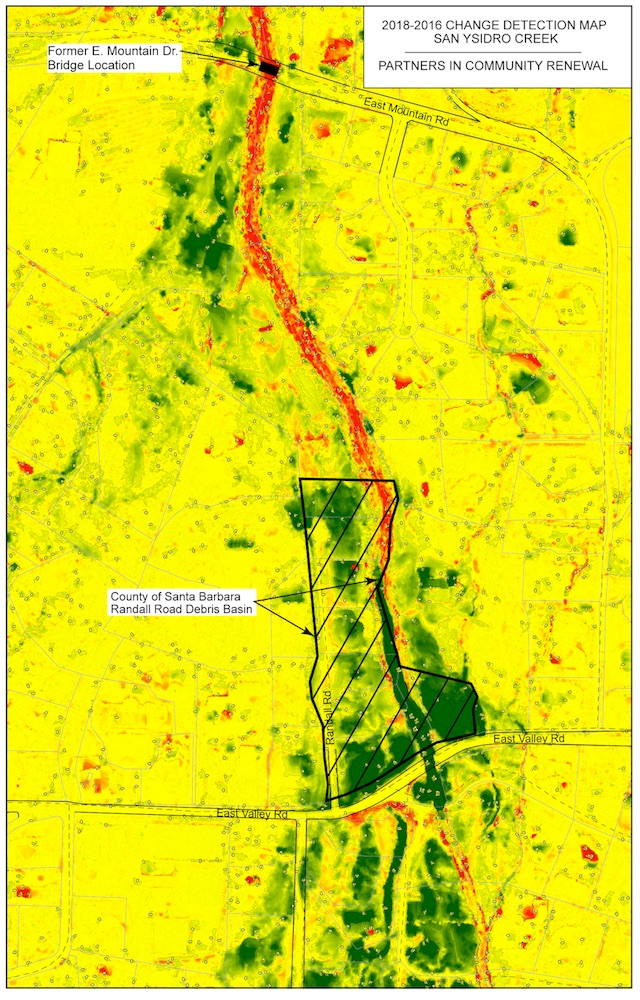 The green areas on this map show the dramatic change in the topography of the Randall Road and East Valley Road neighborhoods along San Ysidro Creek. The different shades of green denote higher elevations created by the piles of mud, boulders and debris that were dropped there during the catastrophic debris flow of Jan. 9, 2018. The dark green areas just upstream of the bridge on East Valley indicate deposits 10 to 16 feet high. The red shows a significant drop in the creek bottom from the scouring effects of a river of debris. (Map by Partners in Community Renewal)

The Ennisbrook Trail from San Leandro Lane presently ends on the south side of East Valley near Randall Road. This trail will be continued northward on what is now Randall Road. Three parking spaces for hikers will be provided.

If the talks are successful, Skene said, the public will be able to hike all the way from East Valley up to the San Ysidro Trailhead on Mountain Drive. Currently, there is a gap in the trail system in this location.

Skene’s childhood home at 1709 East Valley Lane was destroyed last year in the debris flow: he barely escaped, he said, “by a foot or so.” And it was the second time around for him. During the massive debris flow of 1969, Skene said, as a boy of 14, he watched, petrified, as the mud rose three feet high along a four-foot-high wall of sandbags he had helped erect around the house. 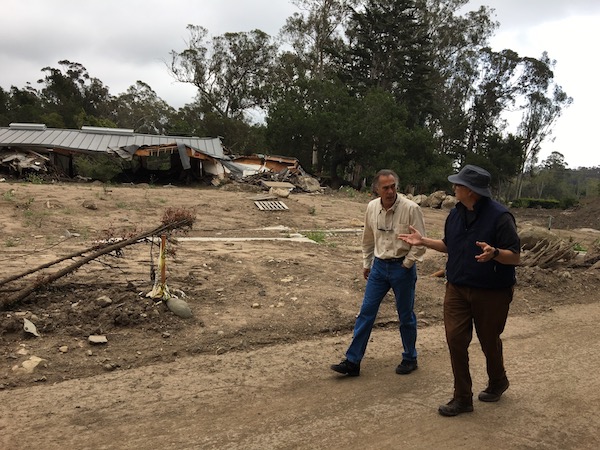 Curtis Skene, left, and Brian MacDonald walk past one of the six out of seven homes that were destroyed on Randall Road during the Jan. 9 debris flow. MacDonald lost his home on Randall, which parallels San Ysidro Creek, and Skene’s home on East Valley Lane was damaged. Two people died on Randall Road (Photo by Melinda Burns)

“You have a “Come to Jesus” moment,” he said. “You focus on how grateful you are. I said to myself in the days afterward, ‘There’s gotta be something I can do.’”

So, Skene, who had never attended a community meeting, did not follow local news, and could not have told you who his county supervisor was or what he did, became a key liaison between the county and the property owners on Randall Road. When he talks about the respect he has for Fayram and Frye, he gets emotional.

Nowhere near large enough. All the properties to the north are not protected. It wasn't just San Ysidro Creek that overflowed.

Wonderful reporting. Thank you for all your work digging out all those historic photos and maps, and for showing the change map and aerial of the debris flow. I hadn't seen those before.

Thanks for your input friend. As a mission canyon resident I am concerned. But the topography needs more studying. There’s more highs and lows not covered in the study to objectively determine a complete failure imho of the possible debris. I am biased. But completely open to discussion. A 10 year old study is just that. Pre Thomas fire to say the least. More reviews of the land and more study! Safety first comrades.

Amazed people would risk living in Cito- running out of water, awful traffic and the occasional disaster of Biblical proportions.

This seems like a big step in the right direction. I couldn't find the capacity of the proposed debris basin though. Does anyone know how big it is going to be? Carpinteria got flooded back in the 60s and built the Santa Monica debris basin with a capacity of 100,000 cubic yards in response. That debris basin was filled in the rains after the Thomas fire, and it spared Carpinteria from flooding. The city of Santa Barbara is also at risk of flooding from the Mission Canyon watershed. In fact, it is really just a matter of when the city is going to flood, not if. UCSB published a paper back in 2009 that is available here which outlines the risk / inevitable outcome. https://www.bren.ucsb.edu/research/documents/Hydro_Final_Report.pdf The debris basins protecting Santa Barbara from the Mission Canyon watershed are woefully inadequate. The paper includes maps showing the areas of downtown that are predicted to flood during a post-fire rain. I think a much larger debris basin will eventually be constructed to protect the city of Santa Barbara. However, I don't think the city will allow that to happen until AFTER a major flooding event occurs. I would suggest evaluating the flood projections outlined in the UCSB paper, and would encourage anyone with property in the likely flood zones to prepare accordingly. It might be well advised to avoid buying a property that is likely to be impacted by the Mission Canyon watershed or Mission Creek.

A reader wonders if there's a power outage in the More Mesa area.

The Santa Barbara Historical Museum became a Fiesta night to remember for guests who arrived to enjoy the exquisite Project Fiesta exhibition highlighting the history of Fiesta with video, photos, and rare artists renditions.

Woodies Car Show at the Beach

The Woodies Car Show was back at the beach again on Saturday.

More than 400 completed the City of Goleta's survey on bringing a bike-share pilot program to Goleta.

The Santa Barbara City Council will consider an ordinance for sidewalk vending during Fiesta weekend.

An edhat reader reports a vehicle rollover near Turnpike around midnight Monday.

One Injured in Solvang Vehicle Rollover

One person is injured following a single-vehicle rollover in Solvang on Sunday.