Reina del Mar Parlor No. 126 of Native Daughters of the Golden West has selected its member Lynn Kirst to portray Saint Barbara, the city’s patron saint, during this year’s Old Spanish Days Fiesta.  Lynn was introduced to the public at Casa de la Guerra on Thursday, April 21, 2022.  In a tradition that dates from 1926, each year Reina del Mar Parlor has chosen one of its members to represent Saint Barbara.  The parlor was founded in April 1901, 121 years ago. The announcement of Saint Barbara coincided with commemoration of the founding of the Santa Barbara Presidio 240 years ago in 1782.

A fourth-generation Californian and resident of Montecito, Lynn Kirst graduated from Bishop Garcia Diego High School in Santa Barbara, then earned her Bachelor of Arts degree in the History of Art from the University of Southern California. While completing her undergraduate degree, Lynn participated in the USC Study Abroad program, spending a semester living in Madrid, Spain, where she studied Art History at the Prado Museum. Lynn also completed the 2-year graduate program in Historic Preservation at the USC School of Architecture.

“Being selected as the 2022 Saint Barbara was a huge surprise,” said Lynn Kirst. “My parents were married at Mission Santa Barbara in 1947, and local history has always meant a great deal to me. On a poignant personal note, my presentation as Saint Barbara not only coincides with the 240th birthday of Santa Barbara, but also with the anniversary of my late husband’s death seven years ago. As a survivor of both the Thomas Fire in 2017 and the Montecito debris flow in 2018, I could never have imagined then that as a widow facing those disasters alone, my life would be as blessed as it is now with this great honor.”

Lynn’s first career was in museum fundraising, during which she held senior development positions at the Los Angeles County Museum of Art, the Laguna Art Museum, and the Southwest Museum.  She was the founding president of Spectrum Tours, a museum travel company that she ran for 10 years, providing custom-designed luxury educational trips for dozens of cultural institutions throughout the United States. Her clients included the Smithsonian Institution, the Philadelphia Museum of Art, the Minneapolis Art Institute, and the Museum of Northern Arizona, among many others. Her local clients included the Santa Barbara Historical Museum, the Santa Barbara Trust for Historic Preservation, and the Santa Barbara Botanic Garden. 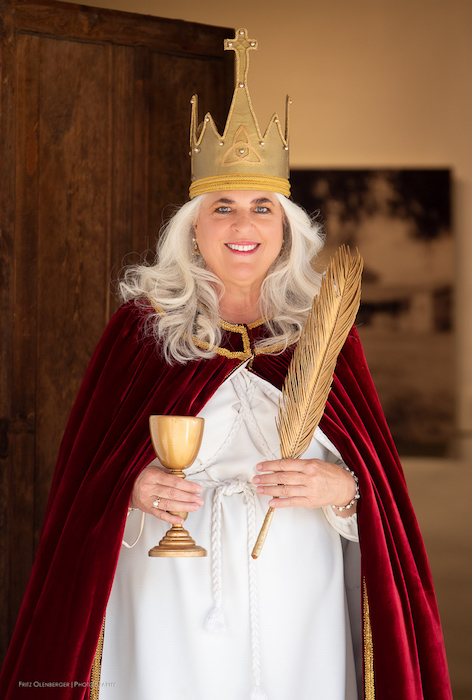 Lynn is an award-winning non-fiction writer and photographer who has been published in a wide variety of periodicals, both local and national. She penned the “Trail Talk” column for the Montecito Journal for 10 years. Lynn was also the editor of Southwest Cooks! The Tradition of Native American Cuisines, which won the National Grand Prize of the 1992 Tabasco Community Cookbook Awards.

The Santa Barbara Channel was named for Saint Barbara during the Viscaino expedition in late 1602.  In the eighteenth century the royal Spanish presidio fortress (1782) and Mission Santa Barbara (1786) were named in her honor.  The saint is the patroness of protection from lightning and calamity, and is revered by artillerymen, mariners, and architects.

The Native Daughters of the Golden West is a statewide organization founded in 1886.  It has a long history of involvement with contributions to historic preservation, veterans’ welfare, conservation, California mission restoration, the N.D.G.W. Children’s Foundation charity, patriotic activities, and college scholarships.  Reina del Mar Parlor No. 126 was chartered in Santa Barbara on April 20, 1901.  It is well known for its old Spanish Days Fiesta activities, child welfare work, over one hundred years of missions preservation, plaque dedications of historic buildings, and civic participation.

Doesn't matter what she has done since she isn't Chumash? People who are decades old Californians are richly deserving of appreciation. Especially when they are part of so many respected groups as stated above. California offers many opportunities to outsiders and each of them should be honored for what they give to this great state.
Congratulations Santa Barbara's patron saint.

What the heck? Native Daughters of the Golden West huh? Ok, I’m sure there are a few people out there that read this and question it, as do I, in the context of what happened to the real native people of California (the Chumash, and all the other native Californian groups) in the past few hundred years.

I’m not a fan, and the bio and costume leave an even more bitter taste in my mouth. I’m sorry if I sound like an a$$, but that’s just my take.

To which fictional depiction?

The resemblance is uncanny.

Exactly babycakes! We grew up

Technically a citation is an

It was a security guard from

Chico, you just gave me a

"Tell me about it, stud"

Yes thank you Hillary. A well

How many fires have there