Nyong'o received her master's degree at Yale Drama School and soon after graduation, she had her first feature film role as Patsey in Steve McQueen's historical drama 12 Years a Slave, which debuted in 2013.  She received critical acclaim and won several awards, including the Academy Award for Best Supporting Actress becoming the first Kenyan and Mexican actress to win the award.

“I went to Yale with no craft, and that’s where I gained my craft. I wanted to go to drama school because I wanted to deeply understand my instrument. I wanted to understand my strengths and to identify my weaknesses in such a way that I can work on all those weaknesses," she said during the Q&A section with interviewer Dave Karger. 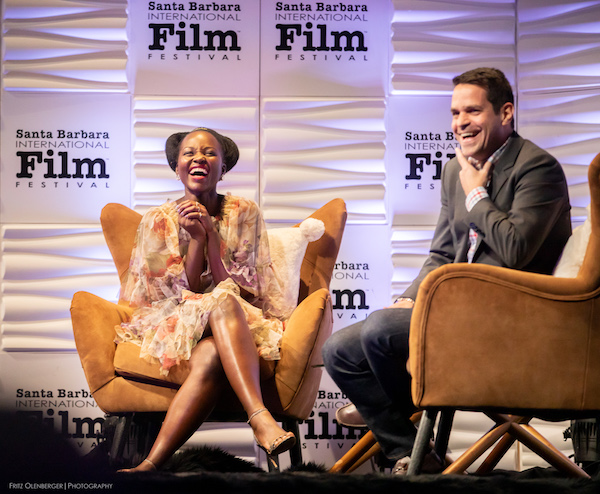 Nyong’o was also honored for her most recent performance in Us, a horror film written and directed by Jordan Peele which follows Nyong’os character and her family, who are attacked by a group of menacing doppelgängers played by the same actors.

She spoke about meeting Peele who pitched her the idea of this movie. “I met him a year before and he flirted about it...he mentioned he was writing something that I may or may not be right for...His writing, you can tell there’s more than meets the eye. He pays homage to the genre. There’s always more than you’re seeing the first time. I had actually never read a horror script before, this was my first go at it,” she said.

The main character Nyong'o plays is named Adelaide while her doppelgänger is named Red, who is the only one of the menacing group that can speak.

“I knew that Red had experienced a trauma when she was younger...I thought, ‘what if there was a way to represent her trauma through how she spoke?’ That’s where I started building her voice…[Jordan] listened to it. He was silent for a moment. And then he said, ‘wow, that’s powerful.” And then he gave me some notes, as he should. And then I went back to work. But he really liked it, and really embraced everything I put on the table. I’m really grateful to have that kind of relationship, that kind of collaboration," said Nyong'o.

Following the Q&A, Peele came on stage to present Nyong'o with the award. He brought the audience to its feet with a touching speech recalling what it was like to pitch Us to the young star and eventually direct her for one of this past year’s most critically acclaimed performances.

"[Nyong’o] gave me the dream role of my life as director of her and her genius…[Once I sent her the script] she began to poke holes in my vision. She was poking the right holes. She was asking questions that I didn’t know the answer to yet. All of a sudden, I realized the type of depth of performer she is. She is the truest professional that I have ever met...she pushed me to this incredible different level,” said Peele.

Additionally, he expanded on the importance of asking actors the right questions early on in the filmmaking process. “I remember at some point I said, ‘what is your ideal method of working? What is the dream process where you feel like you could achieve your best work?’ She looked at me and I saw a tear roll down her cheek...she said, ‘You know, I don’t think any director has ever asked me that question.’ So, suck it, Steve McQueen,” he said to laughs. 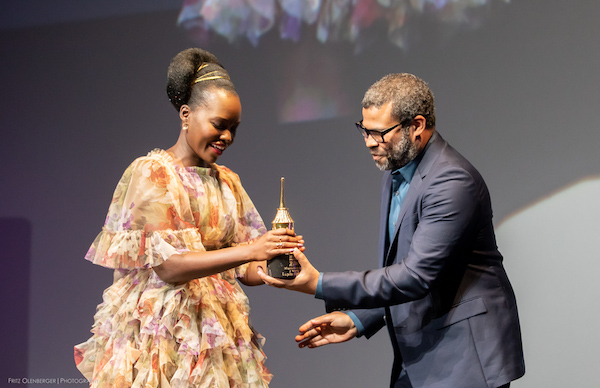 Nyong'o accepted the award and made a touching speech about her work with Peele.

“The creative intimacy that Jordan offered me on Us is the reason I was able to do the work I did. I am just so grateful to have had that opportunity. The roles I’ve played so far have only stretched me more and more. My well is full because of them. I hope that this still remains somewhat a beginning, and that I can carry on making work that matters...There’s something really important about being able to tell important stories. So what I really hope as I move forward is that I can continue to tell important stories that not only bring fancy awards like this one, but also shift the cultural narrative...I hope I continue to make you proud, and just to make the world a more colorful place,” she said.

Nyong'o has also starred in critically acclaimed films such as Marvel’s Oscar-nominated Black Panther and J.J. Abrams’ Star Wars: The Force Awakens, and she will next appear in 355, a female-driven spy thriller. Nyong’o is set to produce and star in Americanah, Danai Gurira’s adaptation of Chimamanda Ngozi Adichie’s novel, which will air as an HBO Max limited series.

I want to thank Mr. Adrian

Wear your mask and keep your

I have recently seen deer

Maybe we should make people

How is it insane? It

This is utterly false. Yang