On 8/2/22 at approximately 1243 hours, LPD Officers were dispatched to Mental Health, located in the 1000 block of East Ocean Avenue, regarding a subject attempting to assault staff. While in route, Dispatch advised the subject was trying to set the building on fire. Officers responded with lights and sirens and located William Morales in the 100 Block of North Third Street holding a large piece of wood and threw it at officers when they got out of their patrol cars. The stick hit no one, but it did hit a patrol vehicle.

Due to his behavior, Morales was taken to the emergency room for medical clearance. The building was evacuated as the flames were growing in the building. Officers knocked down these flames with their extinguishers. Lompoc Fire responded and finished extinguishing the fire. Staff was interviewed at the scene, and officers learned some victims had barricaded themselves to get away from Morales’ violent behavior. Morales then set the room on fire where the victims were located.

The damage from the arson is estimated to be over $10,000. At the Lompoc ER, Morales kicked an officer in the head as he continued to be combative. Morales was medically cleared and transported to Santa Barbara County Jail, where he was booked on the listed charges 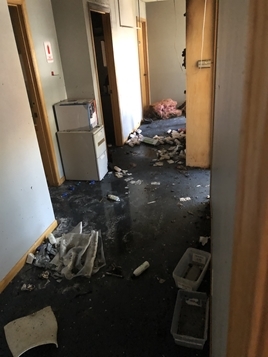 The Goleta Police Department has partnered with the Camino Real Marketplace McDonalds location for a “Coffee with a Cop” event on Wednesday, October 5, 2022, from 8 a.m. to 10 a.m.

Disney's latest Star Wars installment, Andor, has reached the number one spot for streaming this week.

Caltrans debuted its new fleet of traincars for passengers in the Central Valley and Northern California.

Movies Way Back When: Problem on a Movie Set

A photo from the 1913 “Flying A” silent movie “In the Days of Trajan,” which was set in Ancient Rome, had a prop that was all wrong in a couple of ways.

Santa Barbara City firefighters rescued a man trapped in a storm drain under a grate at the Harbor.

[Update]: Sheriff's Deputies are investigating the death of a woman on E. Mountain Drive after she was allegedly struck by a vehicle.

[Update]: The Sheriff's Office has released the identity of the child that was killed in a vehicle collision near Lompoc this week.