Last week, on Thursday, May 24, Santa Barbara locals Nathanael and Christina Matanick celebrated the launch of their latest book Listen: Stories We Carry With Us From House to House at Ace Rivington, a local clothing store inside the La Arcada Plaza. They partnered with the store's owner, Beau Lawrence, who donated 15% of the day's online Ace Rivington profits for Angels Foster Care of Santa Barbara.

The Matanick's dedicated the night to educating the community about foster care by introducing Listen with a book signing and followed it up with a screening of their latest film: “Love is Never Wasted,” which tells the story of a young boy who was placed in the foster care system. 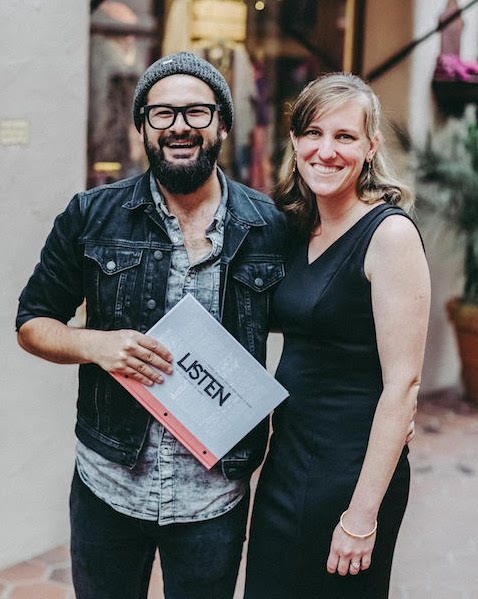 The book is a compilation of true short stories, poems, artwork, and vignettes that highlight the resiliency of youth who've experienced foster care. With the publishing of this anthology, they hope to bring change to the lives of the children who are currently in the foster care system.

“The impact we hope to bring is really embodied in the title: that people would listen,” said Christina Matanick, “That kids would feel heard. That change would come for them. That caring adults in their lives would choose to get involved. That kids would realize there is hope, they can have a different future. That their past does not define them. Because a huge hurdle is just the human connection: for people to empathize, to care, to understand. That element of humanity, of caring and empathizing, makes a tremendous difference for kids impacted by foster care.”

They started their journey in publishing this book by connecting with different networks to invite foster care youth and alumni to submit bodies of work to add to the book. They then set out to begin a crowd-funding campaign to cover the costs of creation for Listen. Now that they have reached a distribution phase, their number one goal for distribution is to get this book into the hands of every teenager in foster care.

“The kids who have already received it just love it and feel so empowered by it. Hearing others' stories that are like their own is empowering and encouraging, because it helps them feel a sense of community and hope that they too can overcome their pasts,” said Christina.

After attending an adoption conference at Santa Barbara Community Church, the Matanick’s started a short-film series called "ReMoved" that has been produced into three films. This year they premiered the latest film: “Love is Never Wasted” at the 2019 Santa Barbara International Film Festival. They worked with film-producer Tamar Sasson of Awakened Muse to produce this film locally in the Santa Barbara area.

“The ReMoved series have had a profound impact on the child welfare system throughout the United States. Countless agencies and government organizations use them to train foster parents, social workers, judges, attorneys, educators, and medical providers,” said Christina.

The film has since taken flight internationally and was awarded “Best Foreign Film” at the Toronto International Film Festival and also recently received its second award, “Best Narrative Film” from the Child Welfare Film Festival in New York City.

"Listen: Stories We Carry With Us From House to House" was funded through Kickstarter with the help of those in the foster care community.  The book is available for purchase here and locally at Ace Rivington here.

Good stuff! Thank you for gifting these kids a future and some much needed love and appreciation.

Awesome! So glad someone is giving these kids a voice. Thank you.

I know the Matanicks personally, and I am so encouraged by their work. Such wonderful, caring people. Their passion for driving change and hope for foster children is truly inspiring. I have seen the ReMoved film as well as Love Is Never Wasted, and their storytelling is truly compelling. It simultaneously breaks your heart and moves you to want to do something to help.

I am so glad they are giving these children a voice, and that their latest endeavor is encouraging other kids who have been through the system. And let me tell you - they practice what they preach. The article doesn’t state this, but they have also fostered a child in real life, whom they have since adopted. They have such an amazing heart for these kids.

I am so happy for their success, but even more so that it has the potential to drive real change. Can’t wait to read “Listen”!

Did you know 150 million hot dogs are eaten on July 4th? Learn more about this holiday's statistics.

C.B. is back with a commentary on this year's July 4th holiday.

Santa Barbara Humane shares tips on how to keep your pet safe during the Fourth of July.

Dog of the Week: ZaZa

Meet ZaZa, a sweet pup who enjoys long walks and hanging with her human.

Cat of the Week: Maddie

Meet Maddie, a cute and friendly kitty ready for a new home.

Residential and commercial curbside service will be delayed by one day next week for the July 4th holiday.

Here's your guide to the Santa Barbara Independence Day Fireworks events on the waterfront!