Santa Barbara resident Sky Adams will take part in an international virtual choir performance as part of the sINgSPIRE program. sINgSPIRE is a ten-week program that combats the effects of cystic fibrosis (CF) through the art of singing by pairing CF patients from all over the world with professional voice instructors for private voice lessons via video call.

“Cystic fibrosis is a genetic disease that damages the lungs over time. Singing—and the mindful breathing that goes along with it—help open our lungs and bring us together as a community,” says Adams.  sINgSPIRE promotes self-awareness and respiratory strength through the practice of good posture, deep breathing, and the act of singing.

Thanks to the final performance at the end of the program, CF patients can now experience what it means to be part of a choir with others with CF. Adams explains: “Due to cross-infection, which is the sharing of certain germs with other people who have CF, those with CF cannot be together and must stay at least 6 feet apart if they are in the same area.  This makes having CF isolating.  We can’t get in-person support from others with CF.”

“This is why the SINgSPIRE choir performance is so particularly important to us and so touching to see when it comes to fruition,” says Ashley Ballou-Bonnema, founder of Breathe Bravely, the US-based charitable organization that created sINgSPIRE.  “We have CF students of all ages from all over the world, including Sweden, Canada and the United States. Bringing them together in the year-end performance is the culmination of all their hard work.” 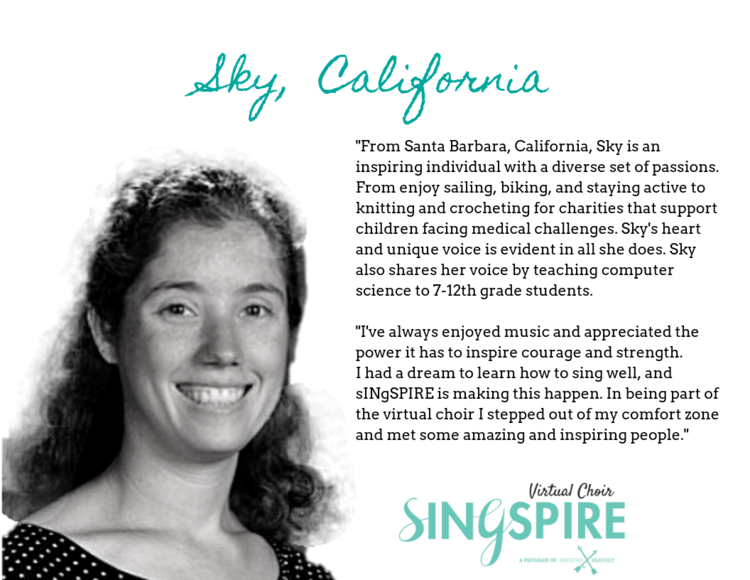 Each year the SINgSPIRE students individually record their performance of an original song, and each video is sound engineered at the Breathe Bravely headquarters in Sioux Falls, South Dakota.  The songs are written by someone with CF and highlight aspects of what it is like to live with CF and what it takes.  “Our first song, ‘Until It’s Done,’ and the accompanying music video is the best description of what living with CF is like that I’ve ever seen.  It’s not easy to explain the physical and emotional aspects of CF in a way that lets people really understand it, but the song and video do it beautifully.  I’m excited to see our next production,” says Adams.

This year’s song, titled “We Give Voice,” will be released on January 14, and will be made available online. Last year’s original song and performance can be viewed here.

According to the Cystic Fibrosis Foundation, “cystic fibrosis is a progressive, genetic disease that causes persistent lung infections and limits the ability to breathe over time.”  In addition to affecting the respiratory system, CF affects the digestive and reproductive systems.  CF affects more than 30,000 people in the US and more than 70,000 worldwide.  There is no cure for CF, but there is ongoing research to develop new treatments with the goal of eventually finding a cure.  For more information about CF, visit https://www.cff.org.

The usage of "elderly" was

I'm sure every little bit

This is tragic, absolutely

3 kids already without a

"And Biden has never heard

Yet again Sac, you're the one

Fondo, even though he's a