Evan Heffernan, born and raised in Santa Barbara recently announced his Olympic campaign for the 2024 Paris Summer Olympics (https://evanheffernan.com/). Evan is among an elite group of modern age sailors who have taken the sport of sailing to the air on hydro foiling kite boards.  He intends to be among the first to compete in this new category debuting in Paris; Formula Kite.

Two Santa Barbara unique ‘institutions’ have played a decisive role in Evans trajectory towards Paris. The first was The Santa Barbara Sea Shells (https://www.sbssa.org/) Evan followed his three older brothers into Sea Shells at the age of 7, learning the basics from older kids and their families that make up this unique local family run club.  As novice sailors, each member has to sail with an older club member or parent in a small (8’) dingy in the Santa Barbara harbor, until graduating to sailing independently.  Sea Shell members of the time have an image firmly in my minds-eye of Evan sailing his final solo qualifying race. He had rounded the last mark and had one last leg of the race to finish and ‘graduate’.  As he came up wind, near the beach, the rudder on his boat hung up on the harbor dredging pipe.  Club members in a safety boat were shadowing the novices, and they offered Evan assistance. “I’m good,“; he firmly refused help as he knew that his solo race would by disqualified. He tried to clear the rudder by rocking and pumping without success.  In a flash he had jumped out of his Sabot in chest deep water and lifted his boat over the pipe. He got back in and discovered that he was still stuck.  Back into the water he went, this time adding a push to the lift and he was free. He climbed back in, nearly rolling into a capsize, saving it with a full-body hike over the rail. He calmly sailed the last leg to the finish and graduation out of the Novice fleet. He was 8 at the time, already showing the kind of determination and calm under fire required to be an Olympic athlete. 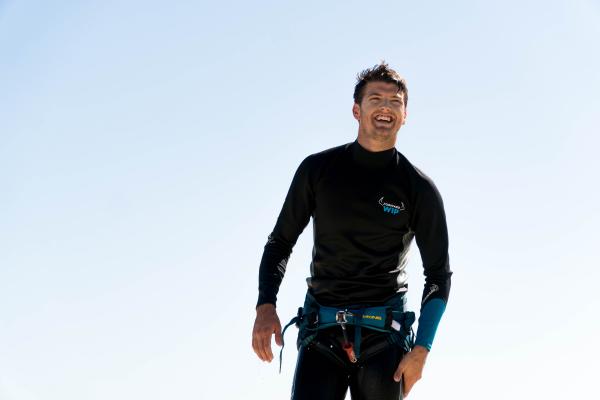 The Santa Barbara Yacht Clubs Youth Sailing Foundation (https://sbysf.org/) is open to anyone in the community to learn from scratch, or in Evan’s case, to refine his skills. When Even aged-out of Sea Shells, he moved directly into the Youth Sailing Program. Weekend regattas all over Southern California throughout junior high, and high school grew his love of sailing and competition. Evan has described his path to a decision to aim as high as possible on the culmination of a passion focused on one thing over time. Water polo in Junior High and a variety of other interests lost out to his love of  sailing.  In Junior High Evan was introduced to Malcolm Gladwell’s ‘rule’ that 10,000 hours focused on one thing can lead to perfection. Since then he has spent his time sailing whenever possible.

Over the last few years kiting has taken him to international events in France, Denmark, Italy, Qatar, the U.K., Mexico and China.  He finished 1st in the most recent 2021 US Open Sailing Series in Florida. Training occurs all over the world. His drive and dedication has resulted in him become the top American in Formula Kite, positioning him for a very credible, legitimate shot at the podium in Paris.

Evan, 22 years old, has funded his passion as a mobile app developer, with many hours from home when the sun and wind are not up.  Training for the Olympics is a full-time endeavor. To be competitive, Evan will need not only time on the water fully focused on kiting, but time for fitness, rigging, tuning, testing, eating, resting and extensive travel. His current training plan includes 80+ hours a month training on the water. Most Olympic sailors say there simply just aren’t enough hours in the day. The practical reality of an Olympic Campaign is that it is expensive and there is scarce time to fund a campaign alone, and train seriously.  Evan’s recent announcement of his campaign included his request for support:

“For American athletes there is very limited funding to pursue Olympic dreams. This means that we must fundraise to pay for our training, equipment, living, and travels to compete with the rest of the world. Thus it takes a large group of passionate supporters to enable the everyday training and progress to the end goal of an Olympic Gold Medal!

As the top American in Formula Kite, with your help, I will maximize my training hours and fully focus on Formula Kite. Up until this point I have worked a full time job while maintaining a tight budget to enable myself to perform on the top of the international stage. In order to win a Gold Medal at the Olympic Games it takes a commitment to sail full time.” 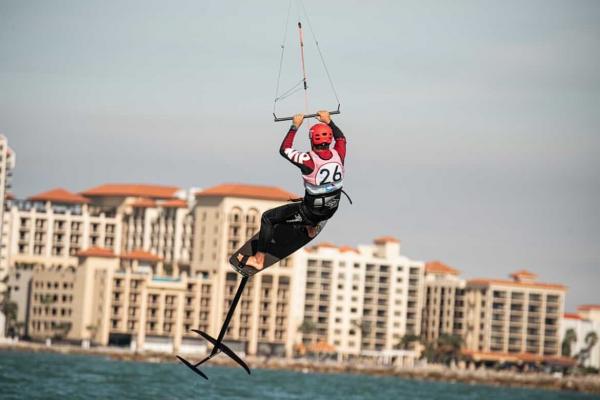 Evan is calling on his friends and neighbors, and all the Santa Barbara families who spent Sunday afternoon’s on Sea Shell Beach with their kids, or those who sailed at a summer camps with the Youth Sailing Foundation.  Support in the first year of an Olympic campaign largely outweighs support later on. It allows the athlete to strictly focus on hours on the water to build a strong foundation, instead of campaign management. This results in performance at preliminary events and unlocks greater support down the road.  Please consider making a tax deductible donation to Evan’s Olympic campaign. https://evanheffernan.com/support

Ok, I thought the olympics were kind of losing their credibility. And now I'm sure - a new "Olympic event", which no one has ever heard of.

Another perspective: Standing on a 4 foot long foil, amongst waves, while balancing and controlling a massive kite above? It’s almost unbelievable that it is even possible. Way more intense than a lot of Olympic sports. It’s going to be an incredible addition and fun to watch. Embrace change.