The owner of Vegan GreenGo has been charged with soliciting the murder of his ex-girlfriend, a judge, and two Sheriff's employees, reports the Santa Barbara News-Press.

Tyler David Beerman, 33 of Santa Barbara, was charged in April with 10 felony counts, including three counts of solicitation of murder, inducing false testimony by threat, and dissuading a witness. His girlfriend, Gissel Castano Diaz, is also charged with one count of solicitation of murder, dissuading a witness and destroying or concealing evidence. 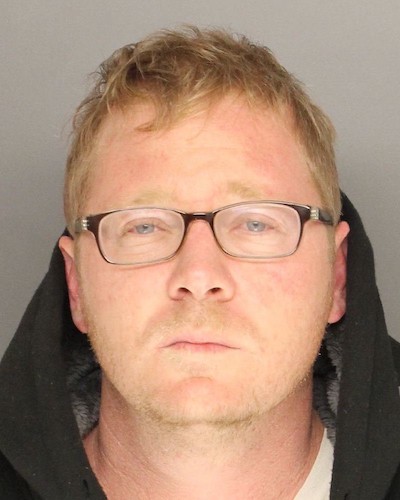 Beerman and Diaz were charged in December 2018 with stalking Beerman's ex-girlfriend. Beerman was also caught on surveillance cameras at the house of a Sheriff’s Lieutenant involved in the stalking case.

It's also alleged that while in jail Beerman agreed to pay another inmate $20,000 to kill his ex-girlfriend, specifically by placing explosives in her car so it would explode while she was inside. He also allegedly agreed to pay $40,000 to “hit” a Sheriff's Lieutenant as well as a detective because he thought the detective was in a relationship with his ex-girlfriend, according to the News-Press.

The inmate was arrested shortly after being released from prison and confessed to law enforcement who planted a recording device that taped conversations with Beerman, corroborating the story. The inmate and an undercover detective then met with Diaz who confirmed the victim's vehicle and agreed to pay $4,000 upfront, reports News-Press.

Beerman and Diaz will appear for hearing on January 15, 2020. Beerman is currently being held without bail while Diaz is currently out on bail.

The vegan Mexican restaurant located at 3613 State Street opened in 2018 and has been visited by several celebrities embracing the Vegan lifestyle. It's unknown if the business is still operational.

No no, you mean ATTEMPTED whack job....

Alleged attempted whack job. I thought vegans were supposed to be harmonious and tranquil?

Wowza, this is a good one. Right out of Hollywood's playbook. Book deal?

Enjoy prison because those who are willing to pay for murder get more time....Vegan? Interesting...

Wow.. Lucky for us, most criminals are complete idiots..this guy included! 10 felonies and placing hits on law enforcement officials will send him away for a long time. Adios!

And this is why people should eat more bacon :)

You mean bacon eaters never commit crimes? Shut down the prisons, boys, free all the convicts and feed them bacon for life.

Exes can really hurt one’s feelings. But to take out a hit like this? I hope the ex is able to move on and enjoy her renewed lease on life ———-After she testifies and helps put Beerman and his new squeeze away for a long long while.

What the?? You make it sound like it might be reasonable payback. Oh, poor little man's feelings. Suck it up. A relationship ended. His alleged crime is despicable, no matter who he's trying to kill.

He will be eating meat in prison

Glad I never said anything bad about the food there - imagine!?

If this guy has been in jail for months how is this place still open ? who is paying the employees? Does he have a partner ? If not maybe there are more people involved that are on the outside. Been there once and good food but didn't think it made that kinda money.

He does have a business partner. I feel like it's possibly a money laundering business as I have never seen it that busy. The guy was probably involved in some other things. Maybe the reason he was stalking his ex was because she knew too much? It's always a possibility..

Completely agree. The food is good but its never that busy to have that type of money. Hopefully they took into the business too

Completely agree. The food is good but its never that busy to have that type of money. Hopefully they took into the business too

Killing animals are bad.. killing humans not so much?

Beerman was charged in APRIL and this is only just now being reported? This is quite disturbing. What else aren't we being told? No wonder so many people are having trouble accepting the validity of today's news media.

The article is a little confusing, but I think these are separate, newer charges. I think....

Case 1 is stalking he was charged with that in 2018
Case 2 is trying to pay for murder. It was charged in April.

story doesn't say how they found out about the cases

Case 1 is stalking he was charged with that in 2018
Case 2 is trying to pay for murder. It was charged in April.

story doesn't say how they found out about the cases

Read it you tin foil weirdos, guy was arrested and while in jail threatened to murder peopke, more than once! The inmate he told it to was released, rearrested and thats when they told the police of the murder plot, the FIRST one! Then he did it again with another cellmate. Reading comprehension is your friend

Didn't this vegan "Green Go" restaurant go into the same location that was supposed to be a pot store in that Upper State strip mall?

Better be careful I'm in the Green Party.

Why would you worry about an ex-girlfriend? With a new one, sounds like the breakup was a while ago. Just carrying a grudge? Someone mentioned the ex might know too much, possibility. This guy sounds like a very angry man.

HA! Good story for a sick sense of humor. Especially when I'm mad at the world for burning in my front yard. I used to go to Rudy's regularly. I live a few blocks away; must soon go see if the restaurant is open. There's been several there in the last few years: previous was the poke shop, right? Who can keep track.

Can a brother just get an Arby's?

How ironic that a vegan is arrested for soliciting murder because he had a beef with an ex-girlfriend.

so what causes more murders, eating meat or eating veggies?

This is crazy! He also owns Conscious Kombucha which is in restaurants all over town. Time to switch to WhaleBird Kombucha!

Geez, talk about a dysfunctional relationship.

Vegans are such easy targets, is it really worth the time and effort to think of something sort of clever to say? By the way, just because he ran that business, doesn't mean he necessarily embraced the life style. Some people are just out to make a buck.

Yeah, I agree, anyhting could

Some people are truly clue

Beautiful, you have such a