The 2017 Arts and Economic Prosperity® 5 report was released today from Americans for the Arts, a nonprofit organization for advancing the arts across the nation. According to the study, our local nonprofit arts and culture industry generates $198.6 million in annual economic activity. This spending - $126.3 million by nonprofit arts and culture organizations and an additional $72.3 million in event-related spending by their audiences – supports 5,857 full-time equivalent jobs, generates $131.4 million in household income to local residents, and delivers $19.1 million in local and state government revenue. 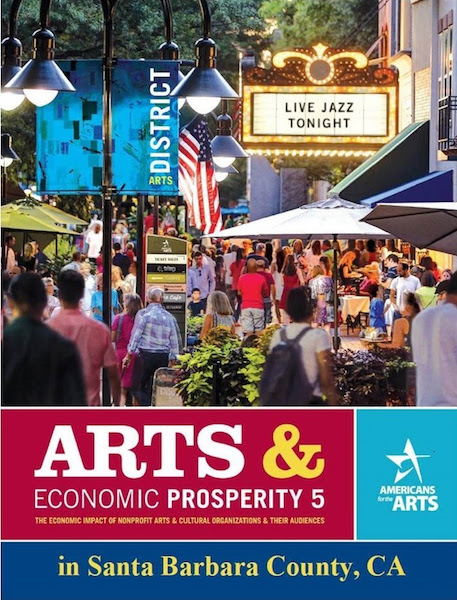 Results from the study demonstrates the tremendous economic capital that the arts and culture sector contributes locally. The report confirms that when we support the arts, we not only enhance our quality of life, but we also invest in the County’s well-being. Administered by the Santa Barbara Office of Arts and Culture, the local study was jointly commissioned by the city and county of Santa Barbara. View the County’s report at www.sbac.ca.gov.

Santa Barbara City Mayor Helene Schneider said, “The city remains incredibly proud of its many arts and culture practitioners and organizations; these figures clearly demonstrate that our investment in this crucial industry is not only fully returned, but infinitely multiplied in its benefit to our local economy.”

Event-related spending of $72.2 million is generated by audiences who attend a cultural event, and who often dine in local restaurants, pay for parking, buy gifts and souvenirs, and pay for childcare. Plus, attendees from out of town often stay overnight in a local hotel.

“These numbers provide concrete evidence that arts and culture is one of the central economic drivers in Santa Barbara County,” said County Arts Commission Chair Dennis Smitherman. “The Arts Commission remains committed to supporting these individuals and organizations, which have the dual power of enriching residents' lives as well as the local economy.”

The national report is a compilation of 341 individual studies from counties, cities and regions across the nation. Nationally, the Arts and Economic Prosperity 5 report indicates that the nonprofit arts industry produces $166.3 billion in economic activity annually, resulting in $27.54 billion in federal, state and local tax revenues. In addition, it supports 4.6 million full-time equivalent jobs and generates $96.07 billion in household income.

Per the report, one-third of the nation’s arts attendees are from outside the county in which the arts event took place (34.1 percent) and spent twice as much per person ($47.57 vs. $23.44) as their local counterparts. Two-thirds of nonlocal attendees (69 percent) indicated that the primary reason they were visiting was to attend that arts event. When local attendees were asked what they would have done if the arts event they were attending was not taking place, 41 percent said they would have traveled to a different community for a similar arts experience.

These results are solely based on the audited 990 forms of 191 participating local nonprofit organizations and data from the U.S. Department of Commerce. There is no extrapolation or estimation, and the information only includes the financial contribution of participating arts and culture non-profits. It also excludes the contributions of for-profit artists and entities, such as venues, galleries and the film industry.

In addition to the detailed expenditure data provided by the surveyed organizations and cultural attendees, researchers and economists collected extensive wage, labor, tax and commerce data provided by the U.S. Department of Commerce (County Business Partners, the Regional Economic Information System, and the Survey of State and Local Finance), as well as the local and state tax data for use in the input and output analysis.

About Arts and Economic Prosperity 5

The most comprehensive economic impact study of the nonprofit arts and culture industry ever conducted in the United States, Arts & Economic Prosperity 5 is conducted nationally by Americans for the Arts and represents the economic contributions of the arts in 341 communities and regions across the country, including all 50 states and the District of Columbia. Local, regional, and statewide project partners contributed both time and financial support to the study. For information, go to www.AmericansForTheArts.org.

About Santa Barbara County Office of Arts and Culture

Goleta is west of Santa

Another Successful Starlink Launch from Vandenberg

I imagine Dr. Swain would be

"take a look at the weekend

It's a desecration of that

Santa Barbara Police Roll Out E-Bikes to Their Fleet

I hope the track down the