Kevin is a senior toy poodle who had been in several homes and shelters before he arrived at Santa Barbara Humane. Upon intake, it was obvious that the senior toy poodle was having trouble walking and was bumping into things. The medical team discovered he was blind from glaucoma. To give Kevin a pain-free life, surgery was scheduled in the donor-funded medical clinic to remove his eyes.

When Kevin was under anesthesia, the medical team discovered that glaucoma wasn’t his only issue. Kevin’s teeth were in poor condition, so he received a dental cleaning and several infected teeth were removed. Further examination also revealed a cancerous lump on his leg which was removed.

But Kevin’s story isn’t about his pain and suffering. It’s about hope and compassion. Today Kevin is adopted. Healed. Loved. 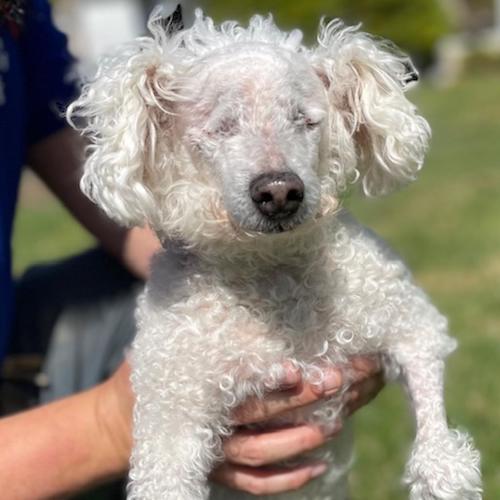 Once Kevin had healed from his procedures, it didn’t take long for the sweet boy to find a home. His adopter reports he is gaining confidence and has become a “big sweetheart” who recently began playing with toys and even put his paws in the Santa Ynez River. This sweet boy now has many more adventures ahead of him.

Kevin’s care would reach $4,000 somewhere else. But because of local donors, this care was provided before he was adopted. The TLC Fund exists so all dogs and cats get the care they need— whether they are in a home with a loving family or still looking for their perfect match.

To learn more about the services available for your pet at Santa Barbara Humane or to donate to help animals like Kevin, visit www.sbhumane.org

A wonderful good news story! I'd love a dog like him.

Such a sweet story. We love you Kevin! Happy “Tails” are very much needed these days. Yay!

Thank you for finding such a good home for Kevin to have as his forever home.....

Tom is back with part two of "Feast or Famine" from Goleta Surfing.

Daniel reports calmer weather this February compared to the intense storms from the past two months.

A reader stumbled across a rare mushroom that resembles Darth Vader.

Joe shares another colorized photo of Old Mission Santa Barbara from the 1880s or before.

Movies Way Back When: A Wet and Soggy Experience

In 1915, a filmcrew was rained out while filiming a silent movie at Zaca Lake.

Bonnie shares a tribute to her mentor, renowned journalist and author of the "Book of Mexican Cookery," Barbara Hansen.

A reader reports the boat ramp at Lake Cachuma is now up to water level.

An edhat reader shares details from a recent school board meeting regarding concerns about the Special Education Program.