A juvenile suspect is in custody for the stabbing in Buellton this past weekend.  On Saturday, July 10, 2021, at about 9:45 p.m., deputies responded to the 100-block of Second Street in Buellton for a fight where a victim was possibly stabbed. When deputies arrived, they discovered an adult male victim who was critically injured with a life-threatening knife wound to his neck. The victim was subsequently air-lifted to Santa Barbara Cottage hospital for treatment. The suspect fled the scene prior to deputies’ arrival.

Santa Barbara County Air Support and Sheriff’s K9 units responded to area to assist with the search for the suspect, described as a white male wearing a black and blue “Thrasher” t-shirt with black jeans, black backpack with roses on straps.  While they searched for the suspect, deputies requested an Everbridge notification be shared with the public to warn them about the suspect and ask that the public call 911 if they spot him. After several hours of searching, the suspect was not located. Sheriff’s detectives and forensic technicians responded to the scene to assist with the investigation.

On Monday, July 12, 2021, the juvenile suspect surrendered to detectives at the Santa Maria Juvenile Hall where he is being held for attempted murder. The victim is in stable condition and is expected to make a full recovery.

If anyone has further information about this incident, or video surveillance footage that may have captured portions of the incident or the suspect, they are encouraged to contact the Sheriff’s Office Criminal Investigations Bureau at (805) 681-4150. To leave anonymous information, you can call the tip line at (805)681-4171, or submit information online at sbsheriff.org/home/anonymous-tip. 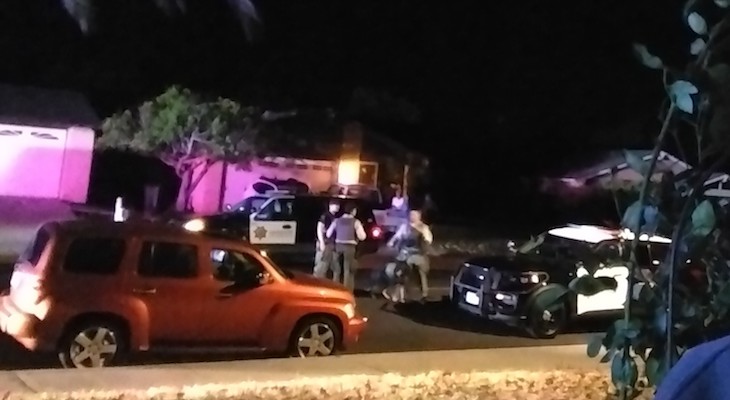 Sheriff is on scene for a stabbing around the 100 block of 2nd St in Buellton.

Be on the lookout for suspect from an assault with a deadly weapon in #Buellton. Suspect is a white male wearing a black and blue “Thrasher” t-shirt with black jeans, black backpack w/ roses on straps. DO NOT MAKE CONTACT, if you see this subject call 911.

A while back an old girlfriend of mine moved to that area. Seemed like a nice bedroom community, pretty clean, good location. All was fine until the house next to her was rented & it was leased by a dealer from "The Poc" & basically, there went the neighborhood.
Constant car & foot traffic in & outta the house, lots of shady characters comin' & goin' @ all odd hours of the night.
Eventually the neighbors had enough, tried to negotiate w/ the owner of the house, that went nowhere, so they started reporting any & all activity there to the cops.
Eventually, it paid off, the cops raided the place, found a HUGE stash of assorted products & arrests were made. In those arrests, some pretty high profile thugs were taken in.
This was during the housing crash back in 2008 when people were renting their homes to ANYONE to avoid foreclosure.
We're past that era now, but the elements from it still exist, even in a quiet place like Buellton. Seen the same things happen in my old home state of FL.

7-12-21 SBCSO - "The victim is in stable condition and is expected to make a full recovery." - well I thank you for this info, always good to here the victim is still with us. "On Monday, July 12, 2021, the juvenile suspect surrendered to detectives" good deal but: "If anyone has further information about this incident..." so they don't believe him?

A friend of mine lives out that way and she tells me meth is making the rounds out there BIG. It is either coming from Santa Maria, Lompoc or the Santa Barbara and Goleta areas.
Lots of busts for possession lately, but the dealers are smart, they either carry small amounts or have minions do the work for them and they've been recruiting young people.
Not saying that's the case this time around, but it would not surprise me one bit if that was the case in this incident.

Venturing to guess it will be DRUG related... No random incident here.

Trail is getting cold; dog track didn't pan out. Forensics en route but some units being released for other calls, including K-9. Good thing is the SO seems to have a good ID on the suspect, so he will be caught eventually.

Calstar is enroute to Cottage with the victim

They have a name of possible suspect

Setting up a landing zone for Calstar

Perimeter is being set up around the area