Yesterday, on July 30, 2021, around 2:00pm, Santa Barbara Police Officers responded to the area of Anacapa Street and East Cota Street for a report of gunshots heard in the area. Officers and Detectives arrived and determined an unknown suspect fired a gun at several victims, then fled the area.

Today, July 31, 2021, Detectives continued the investigation and were able to develop evidence to obtain a search and arrest warrant authorized by a Santa Barbara Superior Court Judge. At about 9:00pm, Officers, Detectives, SWAT Team, and Crisis Negotiations Response Team responded to the 400 block of North Milpas Street to serve the arrest and search warrant at the suspect’s residence. Officers utilized an amplified loudspeaker to order the suspect to surrender. The suspect initially failed to comply with verbal commands, but eventually exited their residence, and was taken into custody without incident.

The suspect is a 14-year-old juvenile that resides in the City of Santa Barbara. Due to the age of the suspect the name will not be released at this time.

All traffic on 400 North Milpas Street was diverted for approximately 2 hours while the warrant was served.

The juvenile suspect was transported to Santa Barbara County Juvenile Hall in Santa Maria where they were booked for Attempted Murder (felony), Participation in a Criminal Street Gang (felony), and Discharging a Firearm in Commission of a Felony (felony).  Detectives are still investigating portions of this incident.

The Police Department encourages community members to participate in the anonymous gun buy back on August 21st, 2021, at Earl Warren Showgrounds. The gun buy back is a community partnership designed to reduce gun-related violent crimes and save lives. Community members will receive gift cards for each gun turned in during the event. For more information visit http://sbcoalition.org

Police activity on the Eastside. Police are on scene near Milpas & Haley Streets. 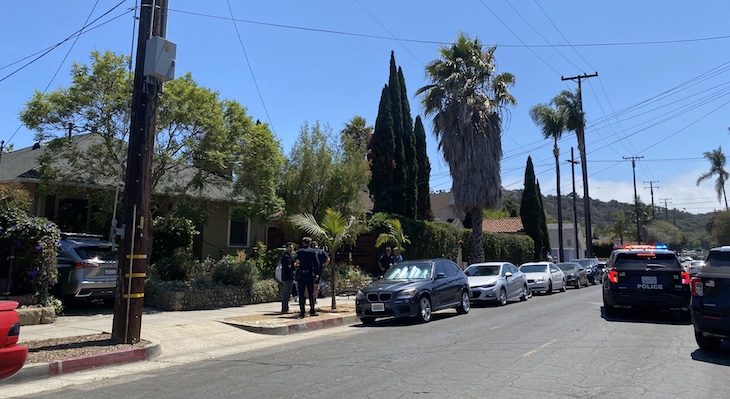 Nearby business have been evacuated

Bearcat is on scene

I LIKE this Temporary Police Chief's "gloves off" way of Policing SB...!

Family members surrendered, will be interviewed

This is related to the 2 p.m. shots fired report on Friday. Police updated this morning. Suspect in jail on serious charges. Sorry I couldn't paste post from them

"Police have identified the suspected shooter as a 14-year-old resident of Santa Barbara. Due to their age, no further details about the suspect are being released at this time." https://keyt.com/news/crime/2021/08/01/14-year-old-arrested-in-connection-with-santa-barbara-shooting/

When I was 14, my primary goal was to meet girls and avoid Jacque at Miramar beach. I have seen Ex-gang members try and help young people in gangs and tell them that if they stay in a gang, they will either end up dead or spending their life in prison. What a waste.

So, I ask again, if our police might track down where and how a 14-year-old got a handgun? Neither the police nor the mainstream media seem to care much about this. I'm pretty sure this kid didn't buy his gun from a licensed dealer. SOMEBODY needs to go to prison for providing access to this weapon.

I had a .38 Smith and Wesson when I was 15 or 16 my girlfriend at the time took it from her Grandfather. Maybe that is how he got it by stealing it from a relative or another adult.

JB86 criminals acquire firearms the same way they illegally obtain drugs. They are not afraid to steal your belongings then sell them or use them as they see fit..

He is only going to get Juvy time though he may not be about to get out till he is 18.

Spreading your BS around doesn't help anyone here in this forum.
By the way,you can't go to a"gun show "unless you are 18 yrs. old,and even with that,I have only been to one gun show and the people there won't sell a weapon just on appearance alone.
Go to one and try to buy a gun.If they let you in I'd be surprised because your entire attitude is disturbing and on your sleeve.
There is 3 shows in CA this time of year,so go and tell us all how far YOU got.

General, I think they have closed those loopholes in CA.
"Subject to certain narrow exceptions, California law generally requires all firearm sales or transfers to be completed through a licensed firearms dealer, pursuant to a background check and other requirements.1

Gunshow Loophole explained: The Gunshow Loophole is when a criminal contacts one of their criminal friends as tells them what the are looking for, such as a .22/.25/9mm/.45/uzi/full-auto/ammo/etc., and then said criminal friend spreads the word around until.....Voila....the specified items magically appear through the "loophole." It the same loophole that was/is used to purchase switchblade knives, brass knuckles, saps, and so on, only now....the little darlings are stepping up their game to firearms. "Teach....your children well...Their father's hell...Did slowly go by"....

The gun show loophole is illegal and has been in Ca for over 20 years. In the case you brought up it would be a private party sales which is also illegal unless going through a FFL and background check.

Why not just say illegally obtained? There is no gunshow involved.

Find out who gave this kid access to a firearm and give them a lengthy jail sentence. That might stop some of these senseless shootings.

That is called a straw buyer and like everyone said, its illegal as hell to do that. There are some crimminals who do that type of thing and sell to other criminals as a business, but since they need to buy lots of guns that all get registered to them at point of sale its a problem for the seller.
1. Serial number comes back to your name. You are going to have to report a lot of guns stolen in order to explain why guns you bought are consistently found during the investigation of a crime.

2. Its is easier to be a stolen gun broker. Sure it costs alot more money to buy inventory that way, but less problems with ATF.

You can't buy fully auto anything in the USA without a special license. Far easier to buy stolen guns, then the parts, or illegally manufactured parts to make your own fully auto weapon. It isn't an easy task at all and those parts would be hard to come by and you'd need to be a pretty good gunsmith to pull it off.

You can't buy anything at a gun show that is illegal in the state the gun show is in. If it is illegal to possess brass knuckles in a state, you cannot possess them at the gun show either much less possess and sell.
You can't show a CA ID and address at an Arizona gun show and buy stuff illegal in CA. It is illegal to sell deadly stuff to someone you suspect is going to do something illegal with it. For example transporting illegal stuff across state lines is a federal crime.

It is possible to move to AZ, gain residency, buy a weapon with a bunch of features that would be illegal in CA and transport it into CA, but that weapon is illegal as soon as you cross the Colorado River and again it would be tough to sell to a gangbanger because you'd have to fix the weapon (remove all the stuff that makes it work fast and easy) to make it legal for CA transfer and sell it to a legal eligible buyer through a dealer with a Federal Firearms License.

Anyway, I'd be willing to bet the gun is stolen. far easier to trade stolen guns than to buy them and risk a federal crime crossing state lines.

Another phantom argument on gun sales is often about a place like Chicago that doesn't allow many types of guns at all, doesn't allow their possession, transport so there are few gun shops and no gunshows because those people follow the law. But downstate you can still buy guns easily. However again you will need to register the guns you intend to straw buy with a verified ID. You don't want to be the John Robinson that has 82 pistols and 45 AK's that all have been tragically stolen or lost in a series of unfortunate boating accidents (but Mr Robinson, you have no boat) if the ATF wants to know how the collection is going

EDNEY - Finally! Someone with actual FACTS!

Last recorded instance I can recall of large scale strawbuying was Operation Fast and Furious run by the Obama Administration and saw Eric Holder held in contempt of court.
https://www.cnn.com/2013/08/27/world/americas/operation-fast-and-furious-fast-facts/index.html
where the ATF bought 2000 guns in the border states with Mexico and set up gun shops that pretended to be corrupt but still legal firearm sales people and then sold the guns to strawbuyers to be moved into Mexico and the ATF then was to try to trace the guns to final use locations in Mexico. The ATF of course f-d it up and lost track of 1400 of the guns with the notable exceptions of the two they did recover at the scene of the murder of a US Border Patrol agent in southern Arizona

This is how the cartels get their weapons, right? Straw buyers from legal vendors and smuggled to Mexico. Good for the vendors, not so good for anyone else.

Pitmix said: "This is how the cartels get their weapons, right? Straw buyers from legal vendors and smuggled to Mexico. Good for the vendors, not so good for anyone else."

That is one way. Another way was the US government's "Fast and Furious" program:

"Fast and Furious was an operation so cloak-and-dagger Mexican authorities weren't even notified that thousands of semi-automatic firearms were being sold to people in Arizona thought to have links to Mexican drug cartels. According to ATF whistleblowers, in 2009 the U.S. government began instructing gun storeowners to break the law by selling firearms to suspected criminals. ATF agents then, again according to testimony by ATF agents turned whistleblowers, were ordered not to intercept the smugglers but rather to let the guns "walk" across the U.S.-Mexican border and into the hands of Mexican drug-trafficking organizations.

Just as ATF agents feared, on Dec. 14, 2010, in the dark of night in a remote canyon in Rio Rico, Ariz., some of the firearms sent over the border to arm Mexican drug runners were used in a gun battle with the U.S. Border Patrol. During the gunfight, U.S. Border Patrol Agent Brian Terry, 40, was killed by suspected operatives of a Mexican drug-smuggling organization. After a battle that U.S. Border Patrol officers started by shooting bean bags at smugglers armed with AK-47s, police arrested four suspects and recovered three firearms from the scene that have since been traced to Fast and Furious."

sorry pitmix, I did not see the post you were responding to. Did not mean to be redundant.

I don’t understand that logic

Worked for me. And they just

I don't need a government

Propane is available at many

Uhaul on the corner of