In full bloom, the “Snowy Fleece Tree” is truly remarkable.  When it is dressed up in all its cream-colored fluffy flowers, this common name is a perfect wintery description of its appearance in spring.

In late April through June, tiny flowers appear on cylindrical bottlebrush-shaped flower spikes (up to 2 inches long and 1 inch in diameter), which form along the stem of nearly every twig.  Each spike holds up to 30 flowers.  The tremendous number of flower spikes can literally cover the tree and obscure the foliage!

The flowers’ sweet fragrance and abundant nectar attract a wide variety of insects, primarily honeybees, which arrive in such great numbers that the tree hums with their productive activity.  After pollination, the flowers produce woody seed capsules that are densely clustered along the twig stems.

This is a medium-sized tree that grows 30 to 50 feet in height, with a crown spread of 25 to 30 feet.  It will naturally grow as a large, multiple-trunked, spreading shrub; however, it can be easily trained into a single-trunked tree, for planting in confined locations or in parking strips.

Though it bears a thick canopy of leaves, each light-green leaf is quite small (only ¾ inch long and 1/8th inch wide) and narrowly lance-shaped; these are arranged alternately along the drooping twigs. The overall effect is a tree with a soft, billowy appearance. 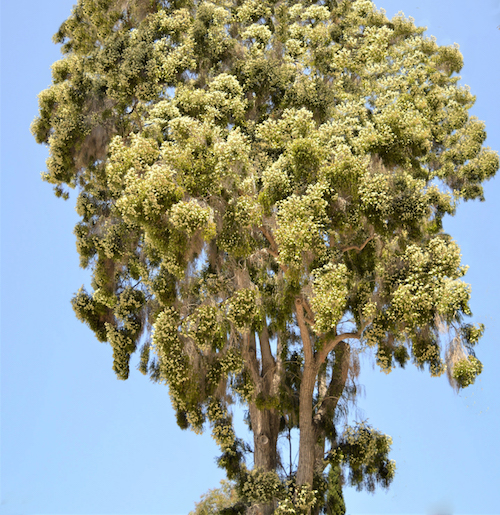 Its bark starts a pale brown, then turns gray and fissures with age.  The fissures often form an interlacing pattern - and can peel open just slightly.  The old bark does not peel off in long vertical strips, as on its cousins, the “Broad-leaf Paperbark” (Melaleuca quinquinervia), the “Bracelet Honey Myrtle” (M. armillaris), and the “Prickly Paperbark” (M. styphelioides), all of which are more widely planted in Santa Barbara.

Like its cousins, the Snowy Fleece Tree is in the myrtle family (Myrtaceae).  Its botanical name is Melaleuca decora.  The genus name, Melaleuca, is derived from the Greek words, “melas”, meaning “black”, and “leukos”, meaning “white” - which refers to the black marks on the white trunks of some trees that can be the result of either age or fire damage.  The specific epithet, decora, is from the Latin word, “decor”, meaning “fitting”, “elegant”, or “decorous”.  It was formerly identified as Melaleuca genistifolia.   Its other common names are “White Feather Honey-myrtle” and “White Cloud Tree”.

The Snowy Fleece Tree is one of the best examples of a beautiful and sustainable tree for our Mediterranean climate.  This is a hardy, low-maintenance, tree.  It survives during our extended droughts but will benefit from addition water in dry seasons.  It tolerates a wide range of soils, including poorly drained sites, although it prefers good drainage.  It does not seem to have any insect or disease problems. It is much appreciated for the fact that its roots are generally well-behaved; they will not heave up adjacent sidewalks and other hardscapes, provided the soil is deep.

The Snowy Fleece Tree is native to the coastal forests of eastern Australia.  In 1908, its seeds were first brought to Santa Barbara and propagated by one of our local pioneering horticulturists, Dr. Franceschi.  In the 1930’s, it began to be regularly planted here as a street tree.

In addition to making an excellent street tree, it is useful when planted as a specimen tree - to make a gracious statement in any landscape - or as a handsome utilitarian screen.  It certainly should be planted, for any purpose, more frequently in our area.

Mature Snowy Fleece Trees can be seen as street trees in several places about town: on the first block of East Junipero Street through the 200 block of West Junipero Street; and, intermixed with “Prickly Paperbark”, on the 200 to 500 blocks of East Canon Perdido Street.  There are single specimens in East Alameda Park (at the corner of Santa Barbara and Sola Streets), in Lower Orpet Park, and in Franceschi Park.

Lovely, educational well-written piece. I will search now to see one of these.

Thank you! I love this and this kind of story that helps us appreciate where we live.

That’s all GT does. I wonder

If we back up to the headline

Duke, as I stated, a similar