With its arched and weeping branches, the Peppermint Tree has the graceful elegance of a weeping willow.   Unlike a true willow, it is water-thrifty and sustainable - making it a perfect choice for our area.

It was given this common name because of the delightful and strong peppermint aroma the leaves exude when they are crushed or torn.

The Peppermint Tree is native to the southwest tip of Australia, in the coastal and subcoastal strip from north of Perth southward through the Swan Coastal Plain, a region with a Mediterranean climate like our own.

It was introduced into California in 1871. By the 1920’s, well-established specimens could be seen in Santa Barbara.  Surprisingly, it is still rather an uncommon tree here - and, because of its many attractive qualities, really should be more frequently planted.

This relatively fast-growing tree will reach up to 25 to 35 feet tall with a spread of up to 30 feet, developing a weeping growth habit and a dense leaf canopy.  Its deep-green, willow-like, fibrous, lanceolate-shaped leaves (up to 6 inches long and ½ inch wide) grow on dangling twigs that have a noticeably zigzagged form. 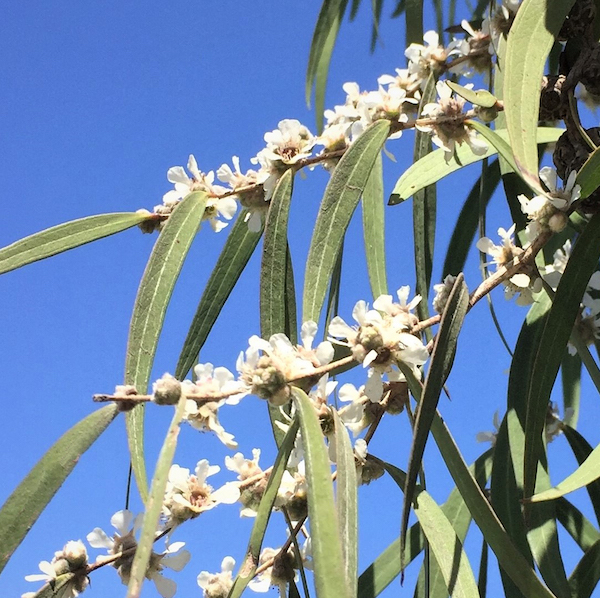 One of the loveliest features of this tree is the flowers, which occur in profuse quantities from March to June.  The small (½ inch wide) white flowers appear on the twigs in close but distinctly separated clusters, very much resembling a chain of beads in a necklace!  They can cover the tree crown so thickly that it appears to have a light dusting of snow.  After pollination, the flowers develop heads of seed capsules (½ in diameter) that will persist on the twigs for several years.

Another of its notable features is the bark, which is reddish-brown to gray in color, becomes very deeply fissured, and will flake with age.

While it prefers a sandy well-drained soil, the Peppermint Tree is versatile and can thrive with most types of soil and exposures.  Once established, it is quite drought-tolerant, though it will look more robust if given infrequent deep watering during the dry season.  Happily, it can tolerate exposure to the windy coastal conditions often found in Santa Barbara County.  It is much appreciated for its strong immune system, being generally pest-free and resistant to root fungus.  However, it is not cold-tolerant and can sustain damage in temperatures below 28 degrees. 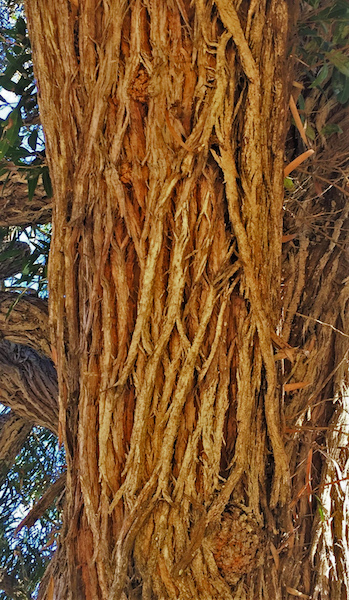 It should be planted in full sun to partial shade.  When transplanting, use care to avoid disturbing the area where the trunk meets the root ball.  A young tree should be trained into a single trunk, because multiple trunks can split apart - resulting in the loss of the whole tree.  There have been reports of this tree being sensitive to phosphorous fertilizer, so apply only natural fertilizer or just nitrogen.

The botanical name for the Peppermint Tree is Agonis flexuosa.  The genus name, Agonis, comes from the Greek word “agon”, which means "a gathering or collection" and refers to the tightly clustered flowers.  The species epithet, flexuosa, is Latin for "full of bends", which refers to the zig-zag pattern of the twigs that change direction at each leaf node, as well as to the flexible arching of the branches.

Its other common names are “Western Australian Peppermint”, “Peppermint Willow”, and “Willow Myrtle”.  It is also called “Wonong” and “Wannang” by the Noongar, an Australian native people, who have traditionally used the leaves as an antiseptic and the trunks of young trees for spear shafts and tools.

This well-behaved small- to medium- sized tree is a fine shade tree for residential landscapes and for parks.  It can also be used, in mass plantings, for effective screening.  There have been several cultivars selected for leaf color and size.  The best and most available in nurseries is called ‘Burgundy’, which, as the name implies, has new foliage colored a deep burgundy; it is somewhat smaller than the species and some of the other cultivars, making it an excellent choice for patio gardens.

A magnificent specimen of Peppermint Tree, pictured here, stands in the lawn at the east end of Shoreline Park.  Other mature trees can be seen at Stow House (by the caretaker’s cottage), and over 15 are to be found in the Calle Barquero Open Space.  One particularly attractive tree is located at 12 La Flecha Lane.  New street trees are located in the 500 Block of E. Figueroa Street at Rinconada Road.

No, you're not going to be

Are there too many humans on

AS a resident of IV, I gotta

5 people inside the residence