The King Palm is the patriarchal monarch of all palms because of its elegant fronds, beautiful symmetry, and tropical effect in the landscape. While it is not the largest of the palms grown locally, it can reach 40-60 feet tall and commands a royal prominence along many of our city streets.

The King Palm has a solitary, smooth, light-grey trunk that is “crowned” with a lush umbrella of arching fronds, each 6 to 10 feet long. The pinnate (feather-like) fronds have dark-green leaflets which are up to 1½ feet long and 3-4 inches wide. 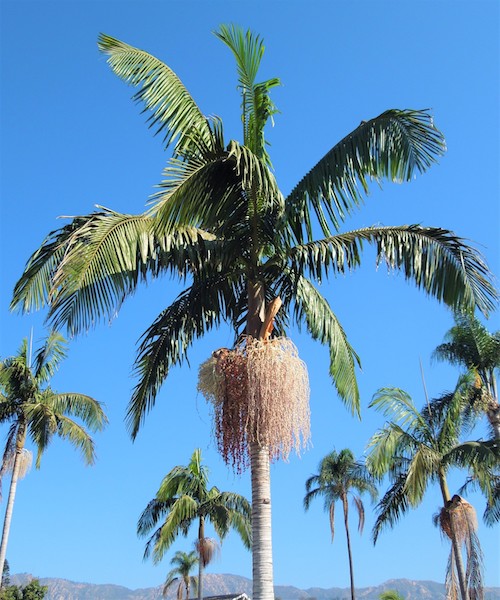 A green to purplish-brown columnar “crown shaft”, 2-3 feet long, rises just above the top of the trunk; this is actually the fronds’ leaf bases which are compressed together, one on top of the other, with the newest ones in the very center. The King Palm is considered “self-cleaning”, because, as the newer fronds grow, they push against the oldest one on the outside layer, forcing it to peel away and shed naturally, without requiring any pruning off by humans.

From November to February, pendulous, multi-branched, whitish inflorescences (flower bearing stems) break out of their enveloping spathes (bracts) in the area between the trunk and the crown shaft - and, once fully extended, display long strings of hundreds of tiny mauve-pink to lilac colored, slightly fragrant, flowers. Male and female flowers occur on the same inflorescence. After pollination, the flowers develop round, green fruits, 1½ inch diameter, that ripen gradually to a stunning bright red in the summer to fall.

The King Palm is a native of Australia, where it grows in the wet subtropical regions of New South Wales and Queensland. There, it has the common name of “piccabeen palm”, derived from the Aboriginal name for the palm, “Pikki”. Its botanical name is Archontophoenix cunninghamiana. The genus name comes from the Greek words “archontos” (meaning chieftain or ruler) and “phoenix” (the date palm); the specific epithet honors the 18 th century botanist and surgeon, James Cunningham.

In spite of its subtropical origin, the King Palm does quite well in our Mediterranean climate, particularly once well-established. It will do better with additional irrigation, but most have managed to survive through our long dry seasons and even through the recent drought. It likes full sun to partial shade. It does prefer a moist, non-acidic, well- drained soil, though it will tolerate heavier soils. Under good conditions, it can grow up to a foot per year! They can be planted singly, or in groups of two or three for a more dramatic effect. 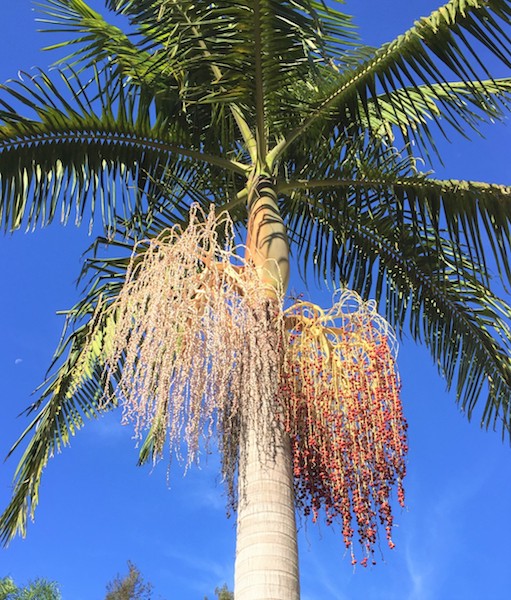 While normally quite pest-free, King Palms can suffer infestations of spider mites or of mealy bugs, and are susceptible to “pink rot”, a serious (and sometimes deadly) fungal disease that usually attacks stressed or damaged palms. They can also develop “root rot”, if the soil stays too wet without draining. They are cold hardy to 28 degrees; young trees can be killed, if the temperature falls below 25 degrees.

The King Palm is remarkably wind-tolerant, but its fronds keep their lush appearance best when in sheltered locations. If the fronds fade to light-green and then to yellow, the palm is telling you it needs nitrogen and micronutrients - to solve the problem, apply a fertilizer formulated specifically for palms during late winter or early spring.

In Santa Barbara, King Palms have regularly been planted as street trees over the years and are seen on the 400-1000 Blocks of Chapala Street (planted in recognition of the contributions of past Presidents and Board Members of Santa Barbara Beautiful), on the 00-200 Blocks of East Victoria Street, and on the 2900 Block of State Street, interspersed with Queen Palms on the 800-1400 Blocks of Anacapa Street and the 100 Block of East Anapamu Street.

I've got a solution to all of

I don't think anyone expects

Takes all kinds, Roger. A lot