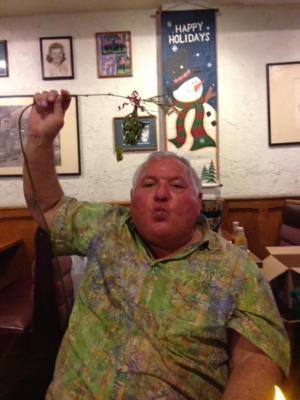 John Steven Rowe passed away peacefully surrounded by his family May 19 and gained his angel wings (I know this would give my dad a big laugh, and he most likely dressed up as an angel for one of his many pranks over the years). He courageously battled cancer for 17 months with grit, determination and constant humor that left the nurses and doctors alike deeming him their favorite patient.

John was born at St. Francis Hospital on August 24, 1947 to Robert and Dorothy Rowe. He was a fifth generation local and his pride in Santa Barbara knew no bounds. He grew up alongside his older brother Bob wreaking havoc around town, and he loved to tell stories of his shenanigans. He attended the Army & Navy Academy and Santa Barbara City College before becoming Vice President and General Manager of Orchids by Rowe alongside his father. Shortly thereafter, John married his first wife Lorna and they had a daughter, Sarah.

John was a jokester and known for his elaborate pranks that he especially liked to play on his dear friend Andrew Easton. One was always plotting something against the other. The two traveled the world judging and speaking at Orchid Shows. During this time, he fell in love with New Zealand and the Cook Islands and would return to each many times over the years.

John was widely involved and respected in the Orchid world and continued to be involved until his passing. John was the President of the Cymbidium Society of America, Director 19th District Agriculture Association, Accredited Emeritus Orchid Judge in the US, Europe, New Zealand and Australia, Honorary Life Member of the New Zealand Orchid Society, Life Member of the Paphiopedilum Guild, Former President of the Santa Barbara International Orchid Show, Member of American Orchid Society and Member of the California Farm Bureau.

His involvement and passion to give back to the Santa Barbara community was widespread as well. John continued the family tradition started by his father in Old Spanish Days Fiesta. He was a long time Director and Officer of Old Spanish Days and a Director of the Carriage Museum since its inception in 1976. For many years he served as the Fiesta Parade Chairman in charge of the carriages and wagons.  He loved to revel in stories of the Fiesta Parade, and he was greatly honored to be the Grand Marshal of the parade in 2017. John was a Director on the Santa Barbara Showgrounds Foundation, Goleta Valley Historical Society, Director of the Santa Barbara Rodeo and Member of the Santa Barbara Jaycees. He was extremely honored when he was chosen as the only American in a three-member panel to be a Float Judge for the 98th Tournament of Roses Parade.

John instilled his love of travel in his only child, Sarah. He took her on trips to Hong Kong, Amsterdam, Caribbean, New Zealand and the Cook Islands to name a few where they shared many adventures. A favorite story is when they were in Hong Kong and John walked by a Mah-Jongg parlor sweating profusely in the July heat and wearing a rice paddy hat. All of the women in the parlor got up and came outside to laugh and point at the big burley American walking down the street wearing his rice paddy hat.

John married Ruth in 1995 and they have filled the years with laughter, entertaining and world travel. Anytime you came to the Rowe Family Ranch House for dinner you knew it was going to be an evening filled with fabulous food including the famous “Rowe” burger, abundant cocktails that always started at 5 o’clock sharp, and games like Train, Backgammon and cards. Jokes were aplenty and John’s belly laughs would permeate the air. Friday nights were for Harry’s and their standing reservation. If you were lucky enough to be invited to join them, you knew it was going to be an evening of fun cross conversations with the tables around you and Dave the General Manager. John knew everyone in the front room and when leaving there were plenty of stops to greet old friends. John and Ruth enjoyed many wonderful trips worldwide and Christmas Eve dinners at Chuck’s with their dear friends Monroe and Kathy Rutherford became tradition. They cruised the world and had ongoing jokes and pranks that they would pull on each other. A well thought out prank could take months in the making, and lots of laughter always ensued.

They absolutely loved their yearly trips to Carmel and road trips up to Cayucos. When John’s daughter and family were living out of state, they would regularly travel to see them and the grandbabies which included trips to Football Bowl Games and Disneyland to take care of them. John was always happy to pitch in and help when his grandchildren were babies besides changing diapers which he had a knack for handing off to Ruth!

John was an avid UCLA football fan and made sure he passed on this love to his daughter who attended UCLA (and married a UCLA football player much to his delight). Much to the chagrin of his wife Ruth who was just as loyal to the USC Trojans. Football seasons were filled with yelling at the TV screen, ribbing, bets and trash talking filled the air between seasons.

John and Ruth enjoyed their social groups and especially El Pescatores where John was President and belonged for 19 years. His weekly Goleta Boys lunches were also a highlight. He followed his father into the El Pescatores group and always looked forward to his Monday lunches with many local men that he had known since he was a child. Their cruises, road trips to the races, Christmas parties and Mardi Gras at The Palace always came with great stories and memories that he cherished. Santa Barbara Community Church and the friends that John had there held a special place in his heart.

His greatest love was for his family, his wife Ruth, daughter Sarah, son in law Grady and grandchildren Maddox and Makenna. He loved nothing more than to spend time with his grandkids, affectionately calling himself the taxi driver as he spent years driving his grandchildren everyday from school to their many sports activities. He was front and center at his grandson’s football games making sure any bad calls by officials were met by his commentary! He loved to support his granddaughter in her swimming and water polo games and was so proud of her for taking on water polo in the midst of COVID. He was at every performance, award ceremony and graduation. Everyone that knew him, and some that did not, were given detailed updates on his grandchildren. His pride in them was unmatched. And we know that even though his greatest wish was to be present for his grandson’s high school graduation, that he will be looking down celebrating and cheering on Maddox when he graduates from Bishop Diego High School in June.

In lieu of flowers, because honestly, he was the only one in the family that can keep them alive, hug your family and friends a little tighter and cherish your time with them.