Bardem and Kidman were recognized for their long-standing contributions to the film industry, most recently in the roles of Desi Arnaz and Lucille Ball in Aaron Sorkin’s BEING THE RICARDOS from Amazon Studios, for which they both received individual Lead Actor SAG Award nominations.

They sat down with Leonard Maltin, who returned for his 32nd year to moderate the evening for an insightful conversation and look back at their careers. Kidman was interviewed remotely as she tore her hamstring on her current film set and was unable to attend in person.

Kidman spoke about playing the much-beloved American comedic icon, Lucille Ball. "I was just unbelievably grateful to be given the chance to discover her… There is Lucille Ricardo, and then there is the Lucille Ball of it. The Lucille Ball of it was so rich and complex, and her fragility, her resilience, her tenacity, her ability to survive, and the things that she did in terms of defying the odds and opening doors, I mean I had no idea about her story… that gave me the chance to really bring her into reality,” she said.

Following her video interview, Bardem was brought on stage where he showered her with accolades.

“I wanna say how amazing just a glimpse of the body of Nicole’s work is on the big screen, it’s really outstanding. The qualities that she has always as an actress, but also the risks she takes… it’s amazing to see it one after the other on the big screen. And in a theater full of people, by the way!” he said.

Kidman responded with compliments to Bardem. “To have this man opposite me when we were working together, and just that pledge of allegiance… he had my back and I had his and that is what made it possible. Because when you look across and see this kind of talent opposite you… I could literally lean in and get lost in him,” she said. 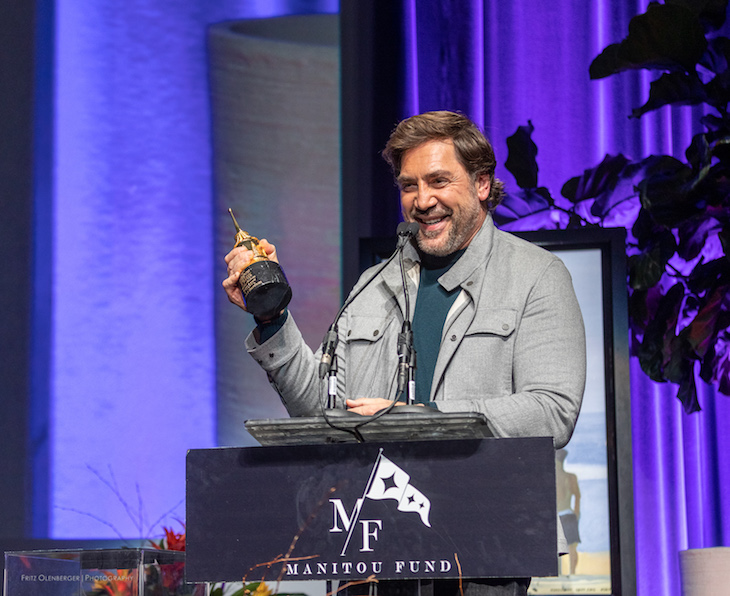 The affable Bardem was a joy to watch on stage. He appeared to truly enjoy being there and interacted with the crowd making a lot of jokes, including the bowl haircut in his standout performance in the Coen brothers' NO COUNTRY FOR OLD MEN.

Maltin followed up by asking if he takes his parts home with him, and Bardem joked: “That one I took, I killed many people in New Mexico! …I went full method!”

When asked if he'd work with his wife Penelope Cruz again he teased, “No, no I don’t want to! …no, of course I will! But we have to be careful with that because we have to be mama and daddy… but she is an amazing actor and I love to work with her. It also makes it more convenient because then the whole family moves together.”

Following the conversation with Maltin, Producer Todd Black presented both with the Maltin Modern Master Award. Todd remarked: “You’re [Nicole] probably one of the most humble people I’ve ever met in my career, and very kind…Every day walking on that set with Javier and being completely present, and kind, and personable to every crew member…and delivering it 100% every day. It was kind of a dream come true for me,” and “Who he [Javier] is here is who he is. He’s as humble, and sweet and gracious and funny and professional as any person I’ve ever met in my career.”

Upon accepting the award, Bardem said: “I’m very honored, I don’t want to leave this stage! …seeing these images on the big screen after two years, in a theater full of people… it’s a joy for an actor.”

The Modern Master Award was established in 1995 and is the highest accolade presented by SBIFF. Created to honor an individual who has enriched our culture through accomplishments in the motion picture industry, it was re-named the Maltin Modern Master Award in 2015 in honor of long-time SBIFF moderator and renowned film critic Leonard Maltin. Past recipients include Bill Murray, Judy Garland, Brad Pitt, Glenn Close, Denzel Washington, Michael Keaton, Christopher Plummer and Cate Blanchett.

Still upcoming is the women’s panel. The 37th Santa Barbara International Film Festival, presented by UGG®, will take place IN-PERSON through March 12, 2022. 200+ films, filmmaker Q&As, industry panels, and celebrity tributes, will be held throughout Santa Barbara, including at the historic Arlington Theatre. This year’s lineup is available on SBIFF’s mobile app. For additional information or to buy passes, visit sbiff.org.