Kentia Palm is one of the most graceful and elegant palms to be seen in our community.  It is also one of the most adaptable to our area, making it perfect for private and public landscapes.

Kentia Palm has been planted in Santa Barbara for over 130 years.  The taller ones that stand in the sunken garden at the County Courthouse are at least that old; these were fully mature when they were planted on the grounds following the construction of the new courthouse after the 1926 earthquake.

Its most distinctive characteristic is its open canopy of slightly drooping fronds – the quintessential appearance and relaxed feel of a tropical island palm.

The spikes of its brand-new pinnate (featherlike) fronds emerge upright from the top of the trunk; over time, they open and gradually recline into an arched downward position.  Each mature frond is long (over 10 feet) and bears slender leaflets (up to 20-inches long and 2-inches wide). The top surfaces of the fronds are a dark green; the bottoms are often a lighter green.

Inflorescences (flower bearing structures) develop among the lower fronds; their stems are rather long (up to 2½-feet) and emerge in groups of 3 to 7 that are fused at the base of the group.  Small, white, and inconspicuous flowers completely cover the inflorescences.  This palm is “monecious”, meaning that male and female flowers occur on the same tree.  Flowering can occur over a lengthy period - from February to September.

After pollination, the flowers develop fruit in tight clusters along the stems.  Each fruit (1- to 2-inches long) is a “drupe” (a single seed inside a fleshy covering) and is generally ovoid in shape narrowing to a small nub at the end,  New fruit is green, later turns yellow and, when ripe, turns red. 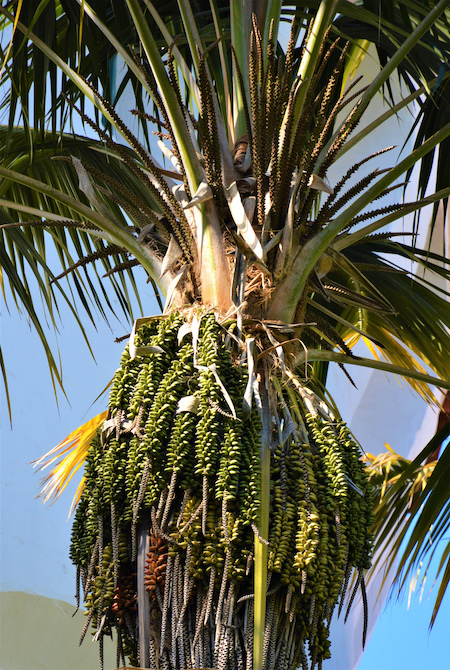 The Kentia Palm grows naturally with a singular trunk.  However, it is often planted in groups of 3 to 5 for landscape design appeal.  Its slender trunk (6- to 10-inches wide) has a slight flare at the base.  It is slow growing, reaching a height at maturity of over 50 feet with a canopy spread of 20 feet.  The trunk is a vibrant green when young, somewhat resembling bamboo;  with age, it will gray out.  The younger trunks are marked prominently with gray bands, which are the leaf scars from detached fonds.

This palm is endemic to the tiny (6 miles long and 1 mile wide!) Lord Howe Island located in the Tasman Sea 500 miles off the coast of New South Wales, Australia.  A rugged, volcanic remnant, this island was first discovered by English explorers in 1788.

The most used common name, Kentia Palm, was given in reference to the small town of Kentia on the island – that town was named after William Kent (1685-1748), a British botanist and garden designer.  Its other common names include Paradise Palm, Parlor Palm, Victorian Parlor Palm, Sentry Palm, and Thatch Palm. 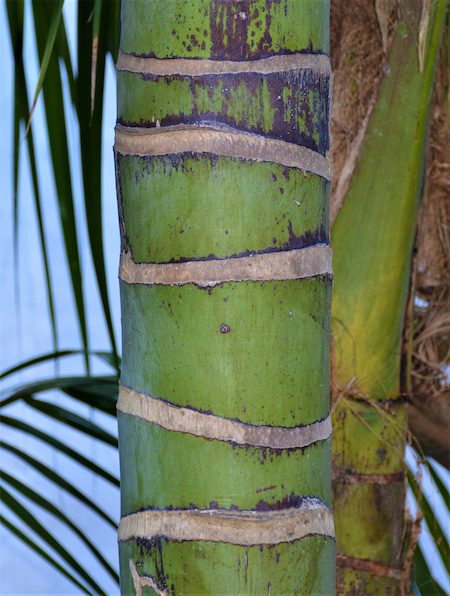 The botanical name for Kentia Palm is Howea forsteriana. The genus name, Howea, refers to its diminutive homeland, Lord Howe Island.  The species epithet, forsteriana, refers to the father-son duo of Johann and Georg Forster, both naturalists and authors, who served on Captain Cook’s second voyage to the Pacific Ocean in the 1770s.

Amazingly, though endemic to such a tiny and isolated oceanic island, Kentia Palm would become the most renowned and iconic indoor plant worldwide.  Starting in the 1870s, its seeds were shipped from Lord Howe Island to England and other countries, including the United States.  It has now been cultivated and planted out in every tropical and subtropical region in the world.

The export of seeds remains a key part of the economy of Lord Howe Island.  However, these sales are now tightly regulated, so seeds from mature palms growing in our area are often harvested and sold to nurseries that specialize in propagating palms.

This lovely palm was given the common name “Parlor Palm”, because it was a must-have accessory for Victorian-era homes, ballrooms, and lobbies of public buildings. It was so highly prized that it was quickly awarded the prestigious Royal Horticultural Society's Award of Garden Merit.  Even today, it is considered a decorative plant that will always add a touch of elegance and refinement to indoor spaces.

Kentia Palm is admirably adapted to our Mediterranean climate.  Once established, it is somewhat drought tolerant - but does require periodic watering during the dry season.  It is cold hardy to temperatures below freezing and has even survived temperatures down to 25º F. for brief periods.  It can be grown in full sun  - but looks better within partial shade and wind protection; in hot direct sun, its leaves can sunburn.  It is tolerant of many types of soils, including clay and rocky soils, but does best in sandy loam soils that are well drained.  It is a slow-growing palm (less than 6 inches per year).  It sometimes requires fertilizing with special palm fertilizer that contains micronutrients, in order to maintain both growth and a deep green foliage color.  When planted outdoors, it is mostly insect- and disease-free.  When grown indoors, it is susceptible to scale and spider mites, which can be easily treated by spraying with insecticidal soaps.

Kentia Palm can be planted as a single-trunk specimen, in twos and threes for landscape interest, or in mass for a dramatic, lush, tropical effect.

Mature Kentia Palms can be seen in many locations in our community: in the sunken gardens of the County Courthouse; in front of the Carriage Museum at Pershing Park; in the Santa Barbara Cemetery; mixed with other palms in front of the Cabrillo Arts Pavilion; many in Lotusland; on the UCSB campus; and, in yards and gardens all around town.

So Santa Barbara are these palms. They talk to you and tell you of the weather like no other. My Great Grandfather brought two of them back from a trip to the south pacific in the late 1800's. They after being potted for decades were planted at our family home in Hope Ranch. The last and most iconic succumbed to Pink Rot recently leaving a big hole in the hearts to any who looked up to see what the weather was doing. Santa Barbara had its own nursery of fame for these and a road is named for south east of La Cumbre Junior High. The nurseries are in San Clemente now that specilize in these palms.

Thank you, David for your interesting and well researched articles about our trees. I look forward to it every month.

And if you don't want it forever, cut it down before it's visible to Parks employees, or you'll have it forever Which is not bad, but depends on where it is and how big it gets.

"When grown indoors, it is susceptible to scale and spider mites, which can be easily treated by spraying with insecticidal soaps." -------------Just a heads up for anyone thinking of using insecticidal soaps. ----------------Such soaps, although often touted as "safe" are indeed a pesticide. If you're treating for mites or scale or aphids, it's best to find a more enviro method. Rubbing alcohol works. Or diatomaceous earth. Or a spray made from diluted dish soap. For outdoor plants, blasting with water from your garden hose will rid plants of scales, mites, aphids. If it's an indoor plant --- take it outside and hit it with some forceful sprays of water.