On Thursday night the Santa Barbara Zoo hosted its second IMPROVology show of the year. It had the expertise of a TEDtalk (Beth Pratt actually has a TEDx talk about P22) with the laughter you would find at an improv show. The event featured animal and insect experts, California Director for the National Wildlife Federation, Beth Pratt, and Entomologist, Justin O. Schmidt, along with comedic actors Stephen Kearin, Kelly Holden-Bashar, Brian Lohmann, and Michael McShane. The balance of informative and improvisation made for a seriously funny performance.

Dean Noble, Director of Marketing for the Zoo, was an engaging host, launching compelling questions at the experts, which led to interesting challenges for the performers. The acts were scored by 3 local celebrity judges, including John Palminteri of KEYT news. 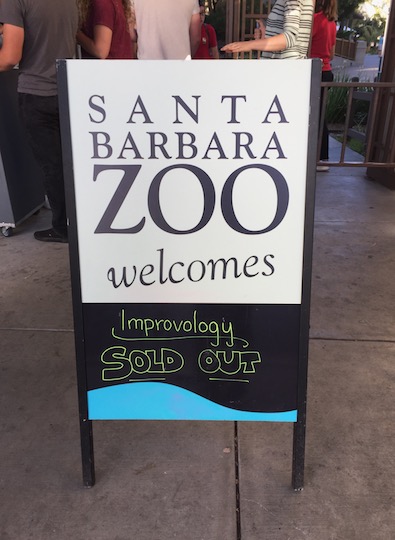 For the science portion of the night, Noble began by asking Justin Schmidt, author of The Sting of the Wild, about the painfulness scale of his insect stings as well as coaxing interesting factoids out of him that were used to fuel the improvised games.

Noble followed this by inviting the children in attendance to the front. They were tasked with choosing the winner of the first game, where the actors came up with the name of an insect, along with its Latin name, sting location, and pain level, inspired by the many insect bites experienced by Schmidt.

A fantastical duet by the Insects Team, made up of Brian Lohmann and Michael McShane, had the duo trading rhymes and filling in lines about the habits of harvester ants. Despite not being part of the comedy act, Schmidt was quite the scene stealer later in the show when he acted as a professor guiding his students through a rigorous day dissecting insects in the laboratory.

The format of the show was a short interview, followed by an improv game based on Noble’s interviews with the animal experts. When Beth Pratt was asked about P22, the mountain lion that travelled across the 101 and 405 Freeways to make a home for itself in Griffith Park, her retelling of his fatal encounter with a snuggly koala bear from the LA Zoo inspired team P22 (Holden-B Hashar and Kearin) to perform their wildly successful Shakespearean Koala Tragedy sketch, complete with 16th century English. The pair had the audience in stitches with this skit, earning a perfect score from the judges and ultimately winning the night.

The show ended with a “What I Learned” closing song accompanied by the house band, where the actors recounted their favorite facts of the night. Holden-Bashar hilariously declared her desire to be treated like a Queen Ant -- powerful, reigning, and served by all her children for 48 years.

For a Thursday night in Santa Barbara, there is no better way to spend an evening out with your family. There was no shortage of talent or information and Noble never missed a beat as host. The performance was recorded for audio to be posted on the Zoo’s “Zoological Radio” podcast.

You can read more about IMPROVology and upcoming schedules here.

Celebrate Stearns Wharf 150th birthday with a celebration on Saturday starting from 10:15 a.m. and ending with fireworks in the evening.

Joe shares a photo of stars we don't often see when looking up.

[Update]: One elderly woman died and another sustained serious injuries after two vehicles collided on Highway 246 near Solvang on Wednesday.

The Santa Barbara County Fire Department would like to invite the community to attend the second 2022 Wildfire Preparedness Exposition October 14-15, 2022.

The San Jose Creek Bike Path Project is on to the next phase following Goleta City Council’s approval Tuesday night of the environmental document.

Is anyone else experiencing a power outage in the 700 block of Anacapa?