Authorities have released the name of the woman who died in an MTD bus accident this week.

Santa Barbara County Sheriff's Office has confirmed 67-year-old Eve Debra Johnson was struck and killed by an MTD bus after it drove onto the sidewalk of Figueroa Street near Chapala.

The incident is under investigation.

"MTD offers our deepest condolences to the families and loved ones of the individuals involved.

MTD is cooperating fully with the investigation being conducted by the Santa Barbara Police Department, and due to the ongoing nature of the investigation, no additional information is available at this time."

Upon arrival, public safety personnel observed two victims on the ground outside of the bus. One victim was deceased while the other had suffered major injuries. Multiple passengers on the bus claimed injury.

A Santa Barbara Fire Department Incident Commander quickly assessed the scene and determined the number of potential casualties exceeded the immediately available resources. As per county protocol, he initiated an MCI or mass causality incident. That alerted region-wide public safety agencies, the hospital, and ambulance services to be prepared to deploy additional resources and apparatus if necessary. Additionally, the Police Department deployed their mobile incident command vehicle and summoned the Critical Incident Traffic Investigation Team.  Approximately 20 police officers and 20 firefighters were involved in the incident.

An unknown number of people were aboard the bus at the time of the collision.  At least two bus passengers needed to be taken to the hospital. Their injuries were categorized as moderate. Many others on the bus reported injuries but declined medical transport and left the area on their own volition after speaking to police investigators.

According to witnesses, prior to the collision the bus was traveling north on Chapala Street before making a right turn east on to Figueroa Street. For a yet-to-be-determined reason, the bus continued turning, driving up onto the sidewalk and striking two individuals before coming to rest inside a city parking lot against four vehicles.

Investigators are in the process of interviewing more than 20 witnesses, including the bus driver. The area in which the incident took place is expected to remain closed for a number of hours while investigators detail the scene.

The cause of the crash remains unknown. 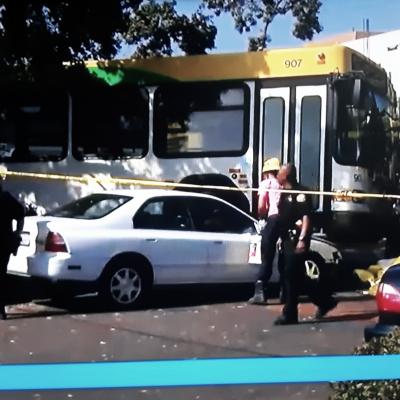 Incident at Figueroa and Chapala...Something happened and I missed the call posting in case others know what is up, please share.

[Update]: An inmate worker on a laundry detail was arrested and rebooked into custody after briefly escaping from the Sheriff’s laundry facility adjacent to the Main Jail on Saturday morning.

Roger reports a tree fire in the 300 block of East Cabrillo Blvd.

An edhat reader reports over 10 emergency vehicles heading to Turnpike on Highway 101, what's up?

The International Space Station will make some nicely visible evening passes through Santa Barbara’s skies over the next week.

Way Back When: The Red Cross Asks for Help

During the “Spanish Flu” in 1919, the Santa Barbara Red Cross was calling for any volunteers who had attended “home nursing” courses.