The Coroner's Bureau is releasing the names of the decedents from the vehicle accident on 7/15/21 on Hwy 101 at El Capitan Ranch. The decedents are 52-year-old Maria Sanchez De Bautista and 20-year-old Yazmin Bautista Sanchez, both from Santa Maria.

On July 15, 2021, at approximately 7:55 A.M., a fatal traffic collision involving six vehicles occurred on U.S. 101, south of El Capitan State Beach.  The collision occurred when the driver of a Ford Expedition traveling northbound lost control and moved to the left across the #1 lane, through the median, and into the southbound lanes.  Two occupants were pronounced deceased at the scene and four other people involved in the collision were transported to Santa Barbara Cottage Hospital with injuries.

Two female passengers in the Expedition sustained major injuries as a result of the collision and were pronounced deceased at the scene by American Medical Response (A.M.R.) personnel.  The other three occupants of the Expedition, including the driver, also sustained injuries as a result of this collision; all three were transported to Santa Barbara Cottage Hospital, two of them with major injuries.  The driver of the Dodge Caravan was also transported to Santa Barbara Cottage Hospital with major injuries.  Additionally, all three occupants of the Honda Accord were treated for minor injuries at the scene.

As of 12:55 p.m. Thursday, the southbound lanes of Highway 101 near El Capitan State Beach are now open.

Extensive extrication was required to reach the occupants of each vehicle.

Two people were pronounced dead on the scene and four others sustained critical injuries. The four patients were taken to Santa Barbara Cottage Hospital.

The southbound lanes are current closed with no estimated time for reopening.

California Highway Patrol is investigating the cause of this collision. 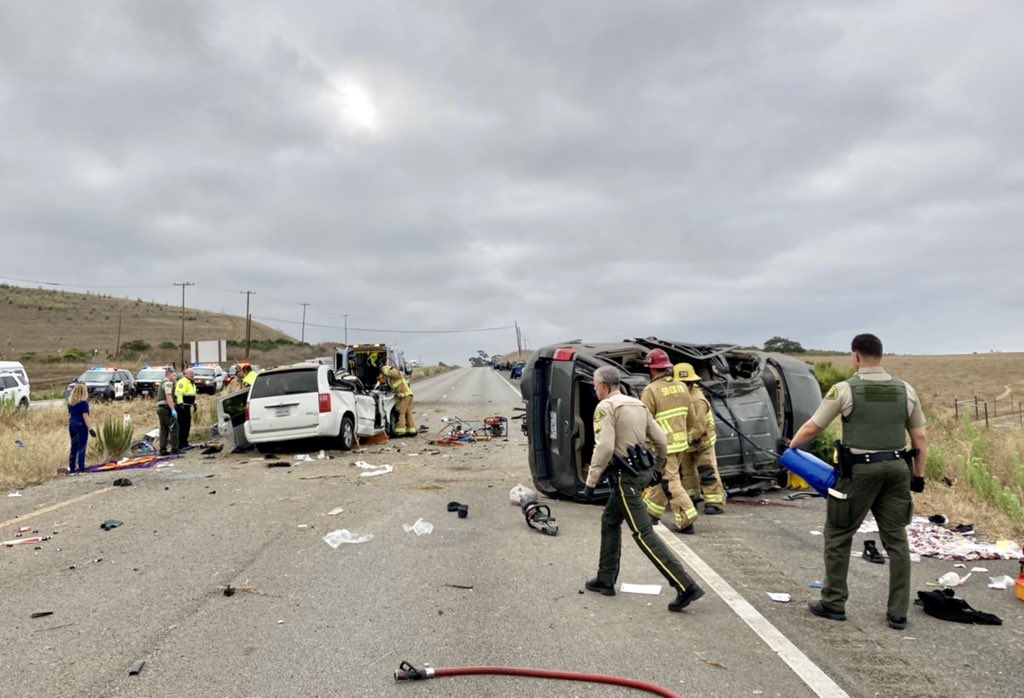 Description of Incident: The southbound lanes of  US 101 are closed near El Capitan State Beach due to an incident involving several vehicles.

Estimated Time of Opening: There is no estimate for re-opening.  A detour is available on Highway 154 and 246.

Excuse me, I meant "..doesn't mean they're NOT there".

Ehhh.... just because you aren't seeing them everywhere and every time you're out driving doesn't mean they're there. There could be a CHP officer traveling a 1/2 mile in front of or behind you at any time, or posted up just passed where you exit the freeway. More presence requires more officers, and I don't think people are running to sign up to become law enforcement officers right now. (By the way, I do agree there is A LOT of scary driving going on out there and I wish a lot less of those drivers would get away with it)

I don't understand why we don't have center dividers the length of the freeway to prevent cars from going to the other side. This type of accident scares me to no end! Even at a normal freeway speed a vehicle of that size coming at you head on is going to do some serious damage.

In more "rural" areas that doesn't tend to have backed up traffic, I wouldn't be surprised if a divider would lead to more destructive accidents. Instead of people running off the road into the median, they are bounced back into lanes, out of control.

If the speed limits top out at 75 mph, why are they making cars that can go 150 mph? Just another thing that crazy humans do, I guess. Like the excessive consumption of fossil fuel is a good idea to start with....

Maybe we need a great depression with extensive suffering to teach us to conserve? We might get one.....

PITMIX - Do you ride a bike, or a horse drawn carriage? I'm betting you drive a car though. Hypocrite.

PITMIX - So, what is it that you're proposing then? Horse and buggy, or we all ride bikes? And, no matter what percentage of EVs are on the road, they still go faster than you'd like.

Pit - if we’re being honest we can obviously pin a ton of blame on the left and right for the deficit. That being said, i don’t think it’s the Right pushing the latest 4.1 trillion dollar bill…

OGSB, Republicons increased the deficit which will lead to a recession. They create the mess, and Biden has to clean it up. Why are Dems the only adults in the room?

Cwaz, bet you don't know what percent of cars are EVs in the US? When they get above 1% of the cars on the road, then maybe I will have to make allowances for them. And you probably want me to ignore the fossil fuels that are burned to make electricity to recharge them. But nice nitpicking.

I think you're right Pit and Kam... err Biden is working on that! Nothing like a good recession and government overreach/oppression to put us in our place!!

PITMIX - Teslas are all electric, and they're faster, and can accelerate better than most cars on the road. So... What's your point?

It was more than speed. Look at KEYT for details. Also more cars involved than initially thought.

Too many crazy drivers out there. Yesterday two Nobel laureates were racing bt Vta and Carp weaving through traffic going 100+. A Caltrans sign said the 55mph construction zone would be strictly enforced but I saw no officers the whole way.

Have noticed the same craziness lately. Many "swervers" going back and forth from lane line to lane line, talking on their cells while they slow down, and speed up , tailgaters, racers, and the odd folks who park in the fast lane going 65 until one tries to pass, then speed up. Last night several going at least 90 mph in the middle lane northbound through Goleta.

And don't people know to go

And don't people know to go

Tajiguas Landfill as an Environmental Leader

Thank you, Robert, as always,

Aware H, can we read this and

Dem here who is voting for

Then one must put up their

Whom are you addressing? I

As we reflect on how lucky we

Don’t people know to go to