The I Madonnari Italian Street Painting Festival will celebrate its 34th anniversary on May 23, 24, and 25, 2020, through an online festival experience thanks to support of its generous sponsors. Previous festival artists will use chalk pastels to transform their pavement canvases into elaborate and vibrant compositions in their driveways. Online festival visitors can view the daily evolution of the street paintings on the festival website, Instagram, and Facebook. Follow the hashtags #imadonnari, #iMadOnline2020, #ChildrensCreativeProject, and #ChalkOn2020.

“I Madonnari is a treasured community event that celebrates art through this beautiful medium. We are thrilled to share this experience online and look forward to a time when we can gather together at the Old Mission,” said County Superintendent of Schools Dr. Susan Salcido. “We thank the Children’s Creative Project for the important work it does to provide arts education to more than 50,000 students annually.”

The new “Chalk for Kids” event invites children to create drawings on their driveways and share their colorful work on Instagram using #ChalkOn2020. Through the sponsorship of Village Properties, free chalk will be distributed on Saturday, May 23, between 9 a.m.- 1 p.m. at the drive-through parking lot at the corner of State and Micheltorena streets.

This year’s featured street painting will be a reproduction of a piece by Thomas Hart Benton. This 12’ x 50’ painting will be created by Sharyn Chan, Ann Hefferman, and Jay Schwartz, with the assistance of Emily Hefferman. 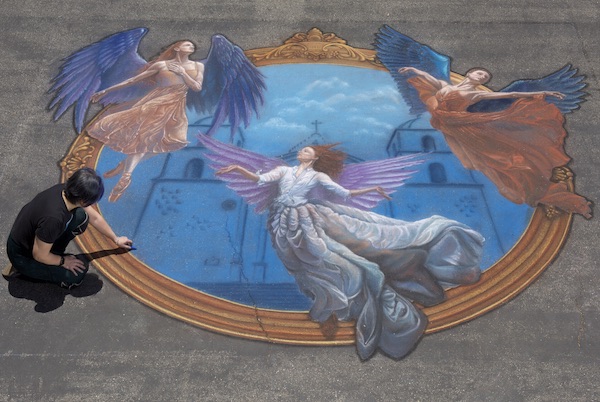 I Madonnari is produced by the Children’s Creative Project (CCP), a nonprofit arts education program of the Santa Barbara County Education Office. The organization was the first to create a festival in North America featuring the art form of street painting. After traveling to a street painting competition in Grazie di Curtatone, Italy, CCP Executive Director Kathy Koury created the festival and the concept of sponsored street paintings as a fundraiser and produced the first local festival in 1987. The late Father Virgil Cordano and the Santa Barbara Mission’s bicentennial committee members also worked with Koury to include the I Madonnari festival in the yearlong series of official events that celebrated the Santa Barbara Mission’s bicentennial.

The festival has continued to grow and now is being replicated in more than 200 cities throughout the Western Hemisphere. In November 2019, four I Madonnari street painters — Jesse Altstatt, Ann Hefferman, Delphine Louis Anaya, and Jay Schwartz — traveled to Santa Barbara’s sister city of Puerto Vallarta to create street paintings with local artists and children. Koury has continued to work with Santa Barbara and Puerto Vallarta Sister City representatives to further develop the festival that has taken place in the city’s main plaza since 2006. The project is co-sponsored by the Santa Barbara-Puerto Vallarta Sister City Committee.

Street painting, using chalk as the medium, is an Italian tradition that is believed to have begun during the 16th century. Called “Madonnari” because of their practice of reproducing the image of the Madonna (Our Lady), the early Italian street painters were vagabonds who would arrive in small towns and villages for Catholic religious festivals and transform the streets and public squares into temporary galleries for their ephemeral works of art. With the first rains of the season, their paintings would be gone. Today, the tradition lives on in the village of Grazie di Curtatone, Italy, where the annual International Street Painting Competition is held in mid-August.

Fundraising from the I Madonnari festival helps continue the CCP’s work. During the 2019-2020 school year, this included:

·      A $200 arts credit for each public school to help offset the performance fees.

It says that "face masks featuring designs from previous festivals can be purchased online" but I have searched the website and the Facebook page and see nothing about this. Does anyone know anything about this?

Just tried to open a facebook account and it requires your mobile phone # to text a verification code to, I only have a landline so the cost of a facebook acc is handing over your mobile # for them to $ from. Guess I'm out of luck.

Try again, you should be able to sign up for Facebook using either a phone number OR an email.

The online festival will also be available on I Madonnari's website: http://www.imadonnarifestival.com

I keep trying, but the chalk doesn't stick to my screen right.

The festival will also be available on the festival website: http://www.imadonnarifestival.com

We walk the pier most

and any comments about