Jacie Rowe of the Final Exit Network informed the Humanist Society of Santa Barbara about end of life options that were new to many of us. Here are my photos.

Back in October 2014 Toni Broaddus of Compassion and Choices talked about the coming End of Life Option Act for California. People were urged to call and write letters to help the law get passed and it paid off. That law was signed by Governor Brown a year later in October 2015 and went into effect June 9, 2016.

In Santa Barbara we are fortunate that the Sansum Medical Clinic is a participant. But in Los Angeles and in the San Fernando Valley it can be harder. UCLA on paper is supportive, but many doctors there are not.

During lobbying for the End of Life Option Act it was expected to take five years to pass. But Governor Brown said he wanted it. He said he would want it for himself if needed. They even got one Republican legislator to sign on. A 2014 poll showed 57-61% support for the bill. By 2015 support had risen to 71%. 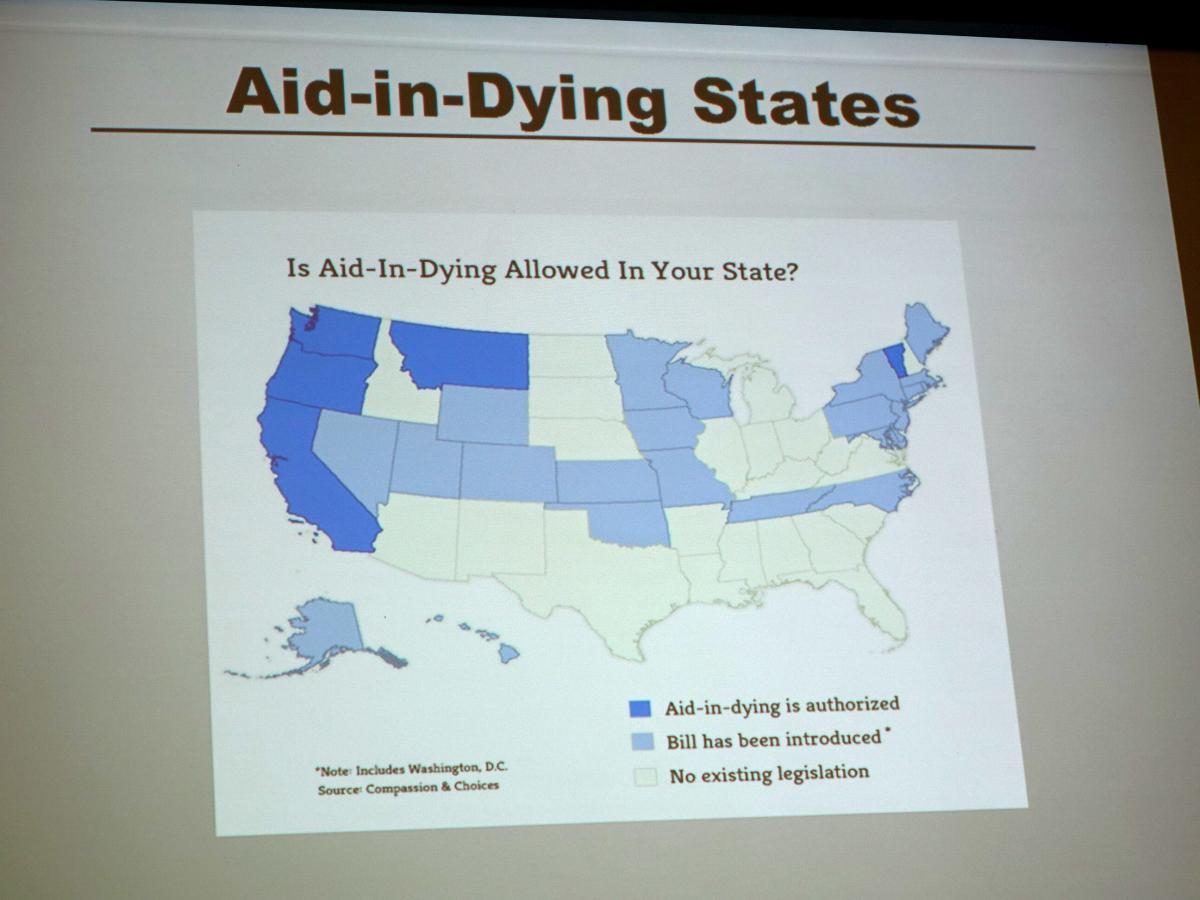 Some doctors pushed back saying "we do no harm". One said he had been a doctor 30 years. Another said he had been, too. Anyone who practiced medicine that long had to have seen terrible, unnecessary suffering. They got the CMA to agree at least to be neutral. It turns out less than 20% of doctors are in the CMA. It is really a 501-C4 lobbying group.

Rowe told the story of a dog trainer woman whose father was an architect. The father had a terrible brain cancer. It felt like termites were eating his brain. Like a hammer banging him on the head. He had the idea that using a gun to end his life would make a terrible mess for others to clean up. He used his architecture skills to design a box that would contain the mess. He worked on it for two years and had to give up. His painful death took five years.

We had the law but for many it did not help. Rowe compared the Final Exit Network to the Underground Railroad. It is a legal organization that works with the autonomy of the person.

Suppose a person "Richard" has a terrible terminal illness. Richard can call Final Exit Network (FEN) and they will call back within 24 hours. They will talk to Richard and submit a medical report for evaluation. FEN doctors would talk to Richard. In a short time Richard will have a decision whether he qualifies. There is no obligation to take the medicine when it is provided.

Rowe quoted Unitarian Universalist (UU) theologian Forrest Church: “Death is not a curse to be outwitted no matter the cost. Death is the natural pivot on which life turns, without which life as we know it could not be. A pro-life-support position is not always a pro-life position. When we can no longer hold on with purpose, to let go is to die with dignity and grace.”

UU and the Humanists were critical to passing the End of Life Option Act.

Rowe's own grandmother died two years ago after five years of terrible pain from cancer. He asked for a show of hands how many here have watched someone suffer until the end. About 50-75% raised their hands.

In 2015 71% of the public supported the End of Life Option Act. Only 51-54% of doctors did. But 74% of doctors said they would end their own life in that situation! FEN is national. Dignitas is their unofficial partner in Europe.

Life Insurance can be a concern if the death is viewed as a suicide. But the End of Life Option Act recognizes the cause of death as the illness, not as the medication that ended the life. The illness is what goes on the death certificate.

How many here have prepared to die? About half raise their hands. He recommends everyone fill in the Physician's Orders for Life-Sustaining Treatment (POLST) form. You can download it online. But he recommends getting it from your doctor. It is fluorescent pink. You can specify Do Not Resuscitate (DNR). And/or no new or experimental medicine.

We need to take responsibility for ourselves. Today. You can post it on your door or on your refrigerator. Some wear DNR bracelets.

Fill in the Five Wishes for end of life. Give it to your doctor and to others who know you so that your wishes will be fulfilled. We prepare for other things. This is one more thing.

Alzheimer's is the elephant in the room. It won't kill in six months or less. But FEN can work with Alzheimer's patients during a critical window: The patient has to be mentally competent at the time of the agreement. 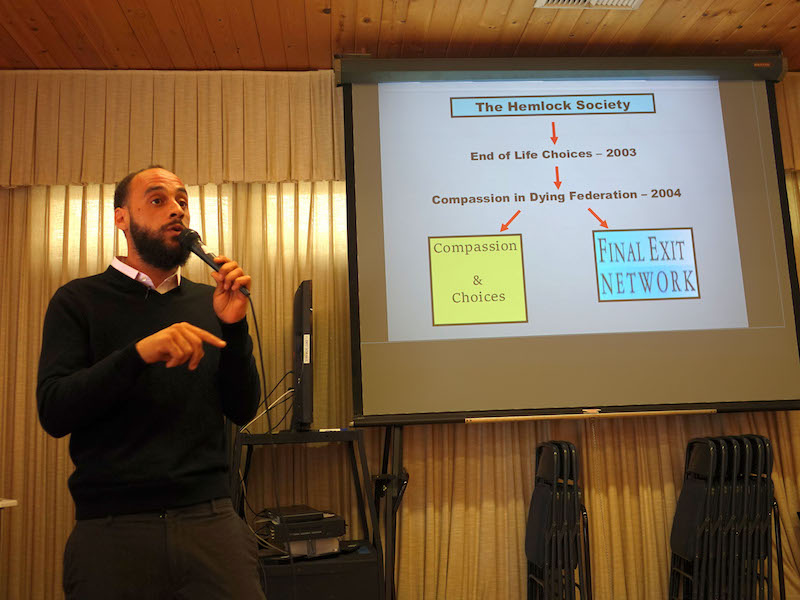 Rowe is a member of FEN himself. He had a surprisingly young initiation. He was just 8 years old and his mother was just 23! She realized you could get in a car wreck and be in a terrible state afterwards where recovery would never happen. She told young Jacie that she would not want to be kept alive in that case. He realized he felt the same way.

A 17-year-old friend later crashed his Mustang and his brains actually came out of his head. But he was still breathing in the hospital. Jacie remembered how the hospital pillow was stained by the brains still leaking out. He was relieved that the parents pulled the plug.

"What if the light at the end of the tunnel is another vagina?" For some they see death as just the start of a new life.

What is the drug? Barbiturates. The dose involves taking 30 pills. It is supposed to take about two hours to die. In fact it can take 15 minutes to nine hours.

There are other options. Refusal of water can take two weeks or more. Another option uses an inert gas. The latter can happen very fast and is always effective within 30 minutes. In many cases the family and friends are gathered and they actually want more time.

He thanked us for coming to learn. Not how to die. But how to end suffering. He notes that in every state but Georgia it is legal to educate a person how to end your life. FEN has lawyers and have had to fight at times.

FEN will also have conversations with family members. Many family members will be religious or otherwise oppose ending your life. But FEN volunteers are often successful at reaching them and having them understand.

He urged people to continue to support Compassionate Choices to get similar laws passed in more states. Their work and FEN's are both necessary and complement each other.

Judy Fontana strongly recommends reading "Being Mortal: Medicine and What Matters in the End" by Atul Gawande. Rowe agreed.

What happens to end of life drugs if they are not used? They should be disposed of the same way as other medications. Santa Barbara County has drop offs available 24/7. Google "Operation Medicine Cabinet" for details.

It is reassuring to know that there are good people like Jacie Rowe with FEN who are there to help with challenging end of life situations. Be sure to join today!

Toggle Comments (Show)
Humanist Society Talk: Jacie Rowe on End of Life Assistance
Having helped 3 parents through end-of-life transitions, I could not support this cause more strongly. We were fortunate that both my parents had Hospice help to make their deaths less painful, but my mother-in-law was forced to suffer for years. No one should have to endure unimaginable pain, seizures, and torture before their body finally quits. End the unnecessary suffering before death. Support doctors, hospitals, families, pharmacists, and any others (esp. Hospice) who help those dying to die with less suffering beforehand.
Please Login or Register to comment on this.

LOTS of people partying this

He is gorgeous, and I hope

I hope that photo is from

Wonderful poster and pin by

The pin and poster are not

Fabulous. Thank you for