A History of Isla Vista Told By a Former Resident

Detailing the rich history of the community, Lodise follows the origin of Isla Vista from Chumash land to a capitalist venture, and finally the current college town that many UC Santa Barbara students call home. 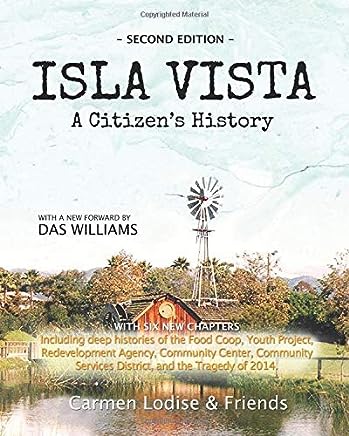 As Isla Vista's (IV)  primary historian and the former leader of the Isla Vista Free Press, his second edition details activism efforts by himself and other members of the Isla Vista community. Initially banned from the UCSB bookstore, the Free Press became a 64-page booklet that slowly morphed in the book that is today.

Though Lodise never attended UC Santa Barbara (he came to the area to do research), he stayed in IV and was inspired to write a book on it because of what he calls “the Isla Vista experience.” Between meeting new people who come together because of the university, to the small town feel, and the opportunities for activism, Lodise, like many UCSB students, carved a home in the seaside town by UCSB.

The book details decades of activism in IV that both students and community members participated in, such as lobbying for IV’s cityhood, IV’s struggle for self-government, and the everyday issues that plague the IV population, such as scummy landlords, rent hikes, police corruption, etc.

Lodise also describes activism efforts in detail; for instance, he writes extensively on the 1970 Bank of America burning, and the details other community activism events such as the creation of the Isla Vista and Park District, as well as the many unsuccessful attempts to make IV a city.

The tragedy of 2014 is also detailed in the Second Edition, and “discusses both Deltopia and the Rodger incident as catalysts in starting up the fourth self-government movement that resulted in the formation of the CSD (Community Services District),” Lodise says.

The second edition features seven new chapters written by five different authors, all of whom are personally involved in their topics and who are in touch with Isla Vista’s day to day going ons, which Lodise hasn’t kept up with due to a move to Mexico. New information includes the development of a new community center (Chapter 21),  new accomplishments by the IV Co-op (Chapter 17), and IV Youth Projects (Chapter 18).

Lodise not only details Isla Vista’s history, but his book also details the relationship that the University has to Isla Vista. In Appendix A, Lodise describes the responsibility that UCSB has to Isla Vista with regards to housing, called the Trow Report. Appendix A also includes some detailed excerpts from the report’s preface and includes 100 pages of observations and recommendations. Chancellor Yang, the current UCSB Chancellor, also positively weights in about Lodise’s effort to publish the First Edition back in 2008.

The student population of UCSB, and those that live in IV, can get involved in activism in various ways. Lodise urges students to pay attention to the priorities the IV CSD is developing, and participate in them. Events like the GIVE benefit sale is an easy way to get involved as well, considering it is move-in season and many people are getting rid of things they no longer want. Students can also volunteer to help with the GIVE benefit sale. Volunteers can contact Viviana Marsano.

Lodise’s book is available in paperback on Amazon Prime. Below is an excerpt of Chapter One from "Isla Vista: A Citizen's History."