Santa Barbara County Association of Governments (SBCAG) Highway 154 Safety Committee announced they will convene a meeting at 6 p.m. on Wednesday, September 29 via zoom webinar. The September 29 meeting will focus on the latest traffic safety and improvement efforts for Highway 154. The committee last met in December 2019. Spanish language interpretation services will be available through Bridging Voices-Uniendo Voces.

“As Santa Barbara County rebuilds our economy and more residents return to work, it is vital that we keep a close watch on public safety for Highway 154,” said Joan Hartmann, chair of the Highway 154 Safety Committee. “I encourage all members of the public who travel on Highway 154 to attend and participate in this committee meeting to hear the latest on regional safety initiatives and to share any comments or concerns.”

A committee agenda will be available on Santa Barbara County Association of Government’s website at www.sbcag.org/meetings in advance of September 29. Members of the public can also sign up to be added to the Highway 154 Safety Committee agenda notification email list serv by emailing SBCAG at info@sbcag.org. The meeting will feature presentations from State and local agencies. The public will have an opportunity to meet and ask questions of representatives from Caltrans, California Highway Patrol, Santa Barbara County Association of Governments, and local/state elected officials.

WHERE:                Zoom Webinar, there are multiple options to participate in the virtual meeting: 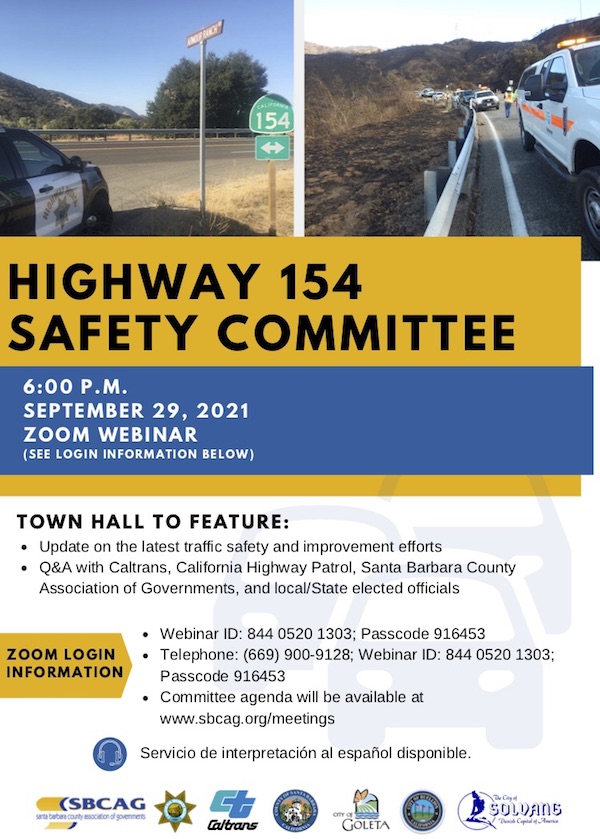 I'll comment with my simple solution: What we need to do is reduce the number of people on the 154, and the easiest way to do that is to increase the time it takes to drive the span. Waze and Google Maps etc ALL tell people that taking the 154 is 10 minutes quicker than the 101, and you can see at the northern turn-off that 80% of the Southbound cars now divert off 101 as a result. Adding in a few stop signs along the 154 route, with CHP enforcement, would slow down traffic JUST ENOUGH to have those people anxious to get here quicker NOT choose the 154. Simple. It won't fix the problem of the casino drunks, but a few signs and a few bags of cement is a lot cheaper than a costly government survey and more wasted time and more deaths.

LUCKY777 - that's actually a great idea. Add to that roving CHP patrols to nab drunks and other reckless drivers and we should be good.