By Hillary Hauser of Heal the Ocean

﻿Heal the Ocean (HTO) has been involved in cleaning up abandoned homeless camps in environmentally sensitive areas because the camps often contain trash and human waste that can end up in the ocean.

In 2020, HTO Field Advisor Harry Rabin, known for his high-tech work through his company, On the Wave Productions began to survey homeless camps from Summerland to Goleta, using drones with high-power lenses and infrared capability. Harry visited the camps, photographing and talking to the unsheltered about their situations – while also asking them to put out their fires

Both City and County fire departments, together with Public Health workers, became interested in Harry’s work. His ongoing surveys have helped fire officials keep an eye on potential conflagrations. It has also provided useful metrics for housing and health authorities to justify ongoing efforts to house the unhoused.

Harry keeps an updated interactive map on Heal the Ocean’s website, accessible to all. 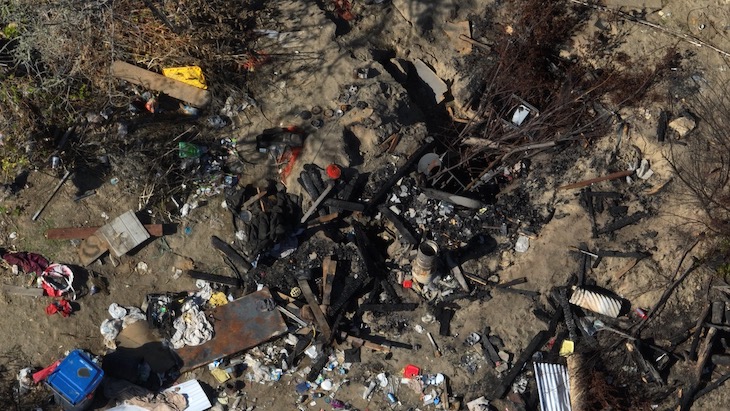 ON WEDNESDAY, SEPTEMBER 28, Harry and his son, Drake Rabin headed to Lompoc with On the Wave high-tech equipment. Their goal: to survey the homeless population in the Santa Ynez Riverbed. The survey was recommended to City Net Lompoc by Santa Barbara County Housing and Community Development Encampment Response Coordinator Lucille Boss.

City Net provides services for people experiencing homelessness, and Lompoc City Net official Keela Potter needed help in locating and assessing the number of encampments and occupants that had returned to the Santa Ynez Riverbed since it had been cleared out previously. State funding had arrived, and City Net Lompoc had a high need to assess what it could now achieve with such funds to help the homeless people living in the Santa Ynez riverbed.

Escorted by Lompoc City Net personnel - Charlotte, Denise and KC - Harry and Drake launched the On the Wave high-tech drone, and very quickly covered 5 square miles of the riverbed. They spotted a number of cars and trucks parked - or driving - in the riverbed. They captured minute information on each site - which included dogs, propane tanks, fuels, chemicals, and more. Some of the sites had crudely constructed shelters framed with makeshift roofs.

Most importantly, mountains and trails of trash were documented - all the polluting stuff that could wind up in wetlands and finally, the ocean.

Harry Rabin approximates least 26-30 individuals are living in the Santa Ynez riverbed based on the approximate 11 encampments surveyed with 2-3 being abandoned. See labels of each picture. Numerous fire hazards at over 50% of these sites. Approximately 2.5 square miles were surveyed revealing these encampments. This was accomplished in minutes by 2 drones with one having infrared capabilities. Both had high powered lenses to enable closer examination of site contents.  Human waste is being dumped into the riverbed as was evident is several of the photos. 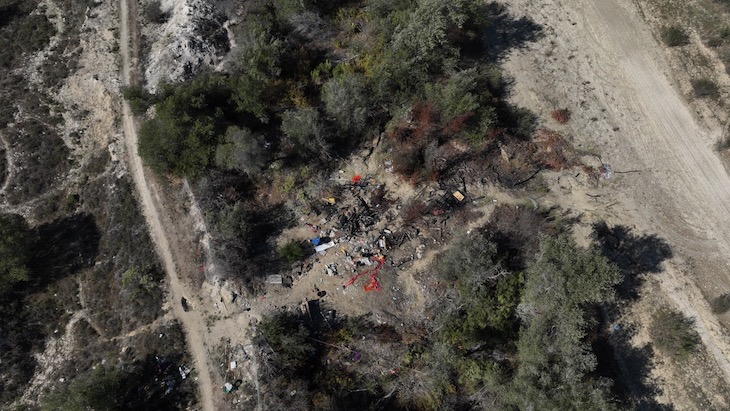 For Heal the Ocean, Harry and Drake will return to Lompoc to obtain more GPS data, and all of this information will be entered into Heal the Ocean’s interactive map. The ultimate goal of the work - and the map - is to help the unhoused get the help they need.

The final step is, of course, cleanup. Waiting in the wings for this important work for Heal the Ocean is Andrew Velikanje of Earthcomb  - a team of once-homeless workers, who will get into the riverbed to remove the tons of debris left behind.

Thank you to Heal The Ocean! They are consistently doing amazing things.

RHS gets 4 upvotes for blaming supply and demand economics and a concept called capitalism. Make the government engineer all these economic forces say you? Good luck. The Russians and Chinese are failing at that. You know what is called.

The homeless that right wingers love to dump on (by their ideology, all victims are to blame and should be punished--like women who have unwanted pregnancies, generally caused by men) are a product of a capitalist, not socialist or communist, society. That alone doesn't make capitalism bad, but it does highlight the hypocrisy of the right wing. If they were decent people they would, while lauding capitalism, also call for high tax rates to provide the sort of infrastructure needed to provide a good life for everyone -- that's how it's done in Scandinavia where taxes are high, quality of life is high, and people are happy, unlike the grumpy right wing sourpusses who are always whining about the homeless or "illegals" or their taxes or money spent on rescuing hikers (that's right, edney, that's *your* people).

"The Russians and Chinese are failing at that. You know what is called."

You don't know history, then.

Capitalism has brought more people up out of poverty than any other system in history.
I like it.

Clearly, both capitalism and kleptocracy, as practiced by all the nations you mentioned, do not work well for many of their citizens.

A solution might be to house the homeless in three large, air-conditioned buildings in say, Needles. The first entry level is a clean, safe environment with basic meals, TV and beds. DRUGS supplied for those that want to waste away. (As a taxpayer, it seems better to pay for safe, non-fentanyl laced drugs than to have these poor souls on the street.) Would also cut WAY down on crime which would be nice for all of us. Second building is for the rehab for those that want it. Third building (where some people start) is teaching of skills that are needed in our society. Trade type skills. Then clothing, job referral across the state of country and references and a bit of start up money. We don't all get to afford where we want to live in this country. I couldn't live on Martha's Vineyard but it sounds great.

The trash in the "encampments" is largely stolen goods. WHY can't the vagrants be charged with possession of stolen property and incarcerated? Once inside they can have a hope for forced sobriety, the first step toward breaking the destructive cycle they have descended into.

Start with a false assertion. Proceed from there.

If it's not unpolitically correct to state the obvious: Homeless camps are not good neighbors, don't clean up after themselves, sometimes start fires the fire department has to handle and shred the environment. REAL campers carry out what they carry in, dig a hole and cover their excrement or bag it and take it out and either don't make a fire or make good and certain it's out when they leave.

A man who was discovered dead in the riverbed near North H Street in Lompoc last month has been identified as 34-year-old Darrell Anthony Whorten. Just keep your head in the sand and pretend this is not happening.

It's your screen name and the last sentence of this post that turns people away from agreeing with your general position.

The family of a Lompoc homicide victim is asking for the community's help to find his killer.

Marcelino Madrigal, 46, was shot and killed while in his tent in the Santa Ynez Riverbed on January 20. Go ahead and downvote me flag me. It’s not going to help the situation in the riverbed.

The riverbed is completely out of control rapes drugs murders suicides. The federal government needs to step in if Lompoc says it’s outside city limits and the county says they don’t have enough recourses and $. This needs to be addressed more than picking up trash!!

Why is it our government can’t do this with all the tax dollars dedicated (wasted) on this issue? Glad for HTO but the real issue is relocating to another place

Yes, these areas should be kept clean. But let's not get totally crazed about the people who are living in these spaces. Housing in SB County is grossly overpriced, mainly because of tourism (including out of area students who want to go to school here for the ambiance and party stuff). The City of SB acknowledged that about 1200 people are renting rooms in the city without permits and in areas that such activity is prohibited. Other people told the city council that a large number of folks renting out these properties were simply trying to accommodate their multiple home ownerships by profiting when they were "out of town" at another property. None of these rooms are available to local workers, students, disabled, poor or temporaliy handicapped folks. The city of SB and other governments could alleviate a lot of the homeless stress by choking off the illicit rentals as a start.

RHS!! HEAR! HEAR!! This is a huge reason for this problem. Not enough housing for locals and insane prices. This area is for the RICH only, and it's gotten ugly. Santa Barbara loses when the city only cares about tourism and the Almighty Dollar. Corrupt to the core.

I applaud the HTO efforts, but let’s get real here - they can’t be everywhere all the time trying to stem the tide of homeless encampments absolutely trashing watersheds throughout the state of CA. This has to be looked at as a very local and short-term bandaid to the problem, at best.

Andrew Velikanje of Earthcomb !!! only in the Last sentence(?)... Of course when it comes to do the actual "Pickup", whom do you call on -> ANDREW. Have dumpster he will pack it up. It's so impressive that he's be doing this, what's his reward? (Giving back) Not trying to be a cheerleader (?) but I also tried here: https://www.edhat.com/news/homeless-camps-in-old-town-goleta
oh, & thanks to HTO...

I agree with praise for Mr. Andrew Velikanje, but the focus of this article IS Mr. Rabin's aerial work:
"In 2020, HTO Field Advisor Harry Rabin, known for his high-tech work through his company, On the Wave Productions began to survey homeless camps from Summerland to Goleta, using drones with high-power lenses and infrared capability."

I spent a good half hour or more reading his website yesterday. I never knew the extent of his work. We are so lucky to have him in, and working for, our community!

100% BICYCLIST! Thank you Andrew for everything! Donate to Andrew at Earthcomb here https://earthcomb.org/

So impressed with everything HTO has done in our area. Helping unhoused get the help they need, clearing out encampments and documenting our area. Not affiliated with this group but if you find the time... donate a little to help https://www.healtheocean.org/donate-3

There seems to be a pervasive

Glad to see the museum back!!

The good things you do have